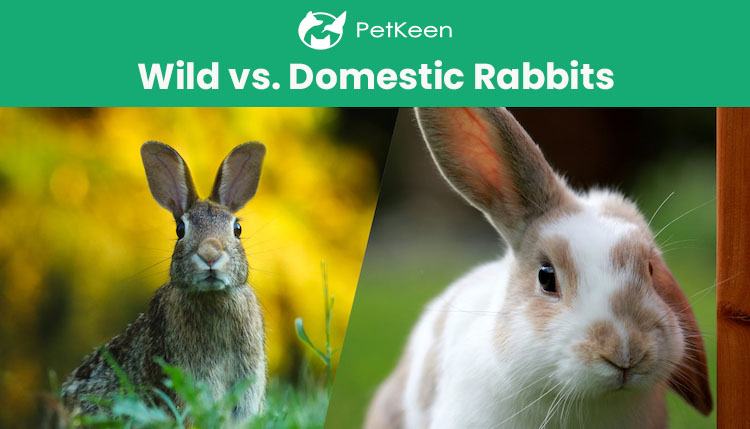 Wild and domestic rabbits are equally adorable, but looks aside, what exactly do they have in common? Is the little cottontail hopping around in your front yard a decent potential pet? How can you even tell the difference between the two?

These are the sorts of questions we will be looking at in this article, so read on for everything you could possibly need to know about wild and domestic rabbits!

So, What’s the Difference?

We should start by saying that the difference between the two beasts is not simply a matter of having a roof over their heads. Domesticated rabbits have been carefully bred over many decades to ensure they have qualities that are suitable to the home environment.

Consequently, they are not even the same species as outdoor rabbits. The differences are, in fact, so pronounced that domestic rabbits and wild rabbits could not even breed with one another, were they given the chance.

How to Tell if a Rabbit is Wild or Domestic?

You can usually tell if a rabbit is wild or domestic by looking at its physical traits. Let’s take a look!

For the most part, the majority of wild rabbits look pretty much the same. Your standard wild cottontail rabbit will feature brown fur, a build of approximately 1-2 pounds, and skinny legs that keep them swift on their feet.

And, of course, they also have the adorable little tail that looks like a swab of cotton.

Physical Traits of a Domestic Rabbit

It would be much more difficult to explain the traits of a domestic rabbit because unlike their wild brethren, their physical traits are not so monolithic. In fact, there are many different kinds of domestic rabbits and some of them can reach sizes of more than ten pounds.

If you are shopping around for a domestic rabbit, the chances are pretty good that you will be able to find something well suited for your home.

What Happens if You Catch a Wild Rabbit?

So, say you catch a wild rabbit. Is that all it takes to make it domestic? Unfortunately, it isn’t so simple as that. Wild rabbits may look just as cute and cuddly as their domestic alternative, but they are going to have an incredibly difficult time adjusting to life in your home.

As a means of surviving, rabbits tend to have very nervous dispositions. They will shrink, shake, and whimper at your touch. Wild bunnies are even able to release a guttural noise that sounds quite a bit like a human scream. If that’s not a sign that your new pet situation isn’t working out, what is?

Is it even possible to domesticate a rabbit? While you should never say never all signs indicate that it isn’t a good idea to try. In addition to being very frustrating to you, the process would also be very traumatizing for the animal.

Remember that domestication is almost never something that happens in real time with a single animal. It’s a process of breeding and trait selection that unfolds over many generations. Your chances of achieving lasting results with an animal that has a life expectancy of a year or so is incredibly low.

What Happens if You Release a Domestic Rabbit into the Wild?

Unfortunately, the outcome for a domestic rabbit released into the wild isn’t likely to be very good. Keep in mind that wild rabbits typically only experience a life of a year or so under the best of circumstances.

Domestic rabbits can live a good deal longer than that indoors, but they may not survive a week in the wild on their own. All of the traits rabbits have that make them suited for the wild have been bred out of the house breeds.

Consequently, a domesticated rabbit may not even be able to find food in the wild. Bottom line? If your pet rabbit is not working out, don’t just open the door and let it hop out. Instead investigate the options in your community for disposing of the rabbit.

Though domestic and wild rabbits look similar to the untrained eye, the two are better off not meeting. Wild rabbits don’t belong indoors, and domesticated rabbits better stay inside. Tempting though it may be, it’s never a good idea to bring a wild animal into your home.