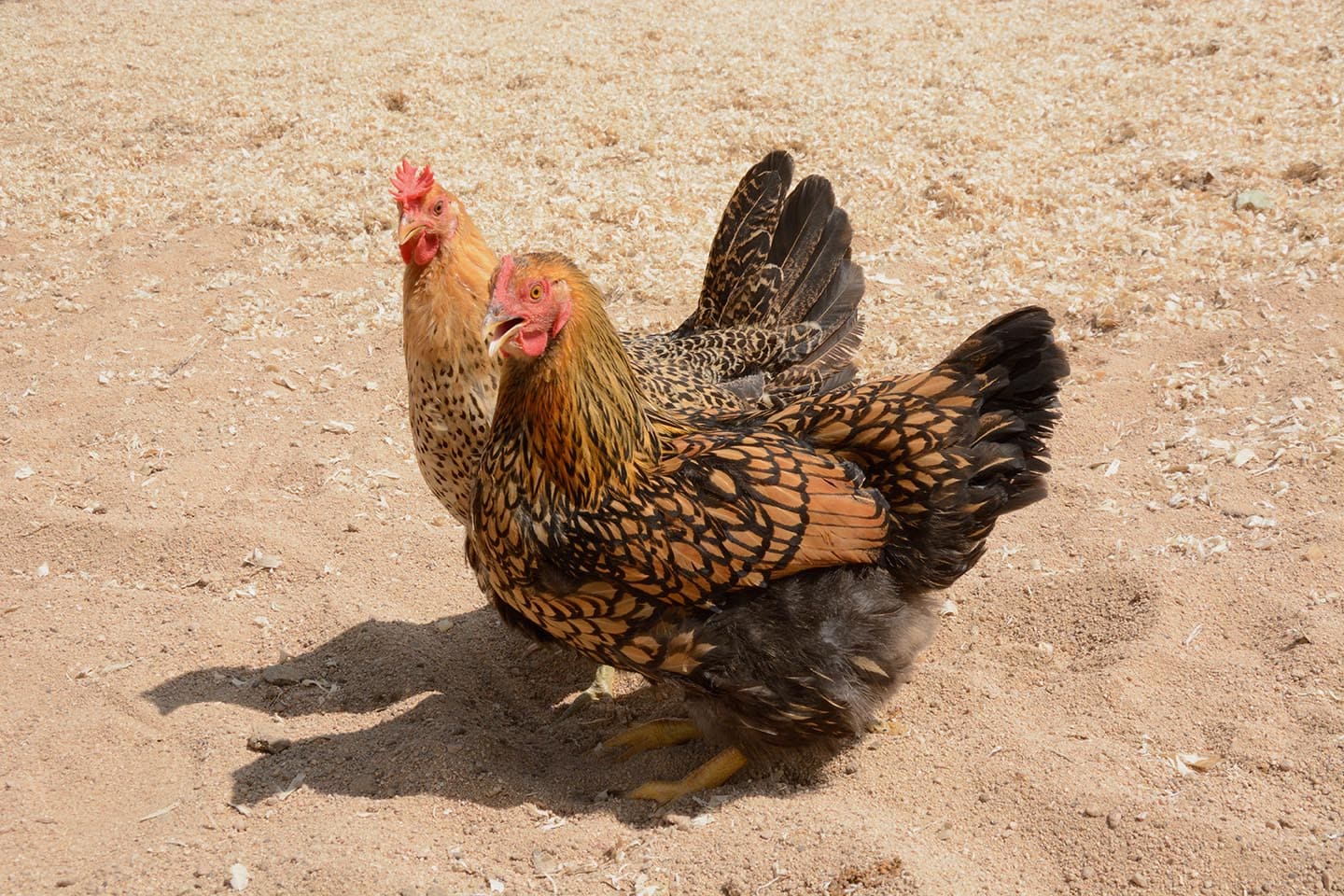 Wyandotte chickens are a heritage breed with a special history; at least to Americans. This breed was the very first American breed that was specifically made to be a dual-purpose meat and egg bird. Named in honor of the Wyandotte Indian Nation, these birds became so popular in England in the early 1900s that some individual Wyandotte chickens sold for as much as a small house!

Wyandotte chickens are a great choice for anyone who wishes to raise dual-purpose backyard birds. These chickens were bred specifically to be the ideal dual-purpose chicken; the first of its kind created in the New World. As great egg layers, you can expect an average of four eggs each week from Wyandotte hens. For meat, males regularly reach weights of eight and nine pounds, so you’re getting a lot of bird for your buck.

This breed is known for being hardy and robust, both in size and health. They don’t have any breed-specific health concerns for you to worry about. Even better, they have excellent temperaments that make them all-around easy to care for. They’re generally considered to be docile and friendly chickens, though probably not the type to crawl into your lap.

Today, there are many different Wyandotte varieties. When Wyandottes were first created in the 1860s, there was just a single type of Wyandotte, called a silver laced Wyandotte. By the early 1900s, Wyandottes had crossed the ocean and the English went crazy for them.

When industrial farming took over, the Wyandotte fell out of favor. Thankfully, many homesteaders and backyard keepers have realized the incredible potential of the Wyandotte, making this one of the more popular heritage breeds today.

How Much Do Wyandotte Chickens Cost?

Wyandotte chickens aren’t very expensive. Prices do vary, based on what you want. You can choose from roosters, hens, or a mix. You’ll also find major price breaks when purchasing multiple chicks. On average, you’ll spend between $2-$5 per chick for Wyandottes. Females tend to cost a bit more than males, and you’ll save the most when you take a mix and they don’t even check for sex.

Wyandottes aren’t known as overly-friendly chickens, but they are considered to be very calm and easy-going. They’re friendly birds, just not particularly affectionate. Your Wyandottes won’t be lap birds, but they won’t show aggression toward you either. They are slow birds though. You’ll notice that when walking the yard feeding on seed, they move quite slowly. Wyandottes are never in a hurry.

When Wyandotte chickens were first created, they only came in the silver-laced variety. Shortly after, golden laced Wyandottes were created. There were also a few chickens born with interesting coloring, including white Wyandottes. White is actually the rarest color for a Wyandotte chicken.

When a white Wyandotte is crossed with a Barred Plymouth Rock, it creates a Colombian Wyandotte. There’s also a Buff Wyandotte and a Partridge variety. But all of these are just a taste. Since they’ve become quite popular for their excellent meat and egg production, Wyandottes have been bred into many varieties, including blue, blue-laced, red, red-laced, silver-penciled, and more than we can even list. Suffice to say that there are Wyandottes in just about every color you might want! According to the Entente Europeenne, there are at least 30 colors that Wyandottes come in.

But it’s not just colors that can separate Wyandottes. There are also bantam Wyandotte chickens, which are far smaller than full-sized specimens. Male Bantam Wyandottes weigh 40 ounces and females are even smaller at a mere 36 ounces on average.

How to Take Care of Wyandotte Chicken

Your chickens will roost in their coop at night. This needs to be a place where they can be safe from the elements. They should be able to keep dry and warm inside if it’s raining, snowing, or any other type of inclement weather. There should also be a perch for each chicken that’s about a foot wide.

The total size of your coop depends on how many birds you have. A good rule of thumb to follow is three square feet per bird. So, if you have six birds, your coop should be at least 18 square feet.

Chickens need more than just roosting space. They need a much larger space where they can move around, forage, and get enough exercise not to become obese. The run should be several times larger than the coop. About 15 square feet per chicken should do. So with the same six chickens, you’d need a run that’s at least 90 square feet.

Chickens are prey creatures. We’re not the only ones that like to eat these tasty birds! There are plenty of predators that will see your chickens as a yummy meal, including foxes, coyotes, bobcats, and more. This means that you’ll need to keep predators out so your flock can be safe. You’ll need to ensure that both the coop and run are predator-protected. You won’t be able to watch your birds at all hours, so build defenses you can be confident in.

Do Wyandotte Chickens Get Along with Other Pets?

Wyandotte chickens are generally considered to be friendly chickens, but this doesn’t necessarily mean towards other species! Still, they’ve been known to make friends with more than just humans, so your Wyandottes definitely could be friendly with other species as well.

Of course, some species are more likely to get along with your chickens than others. Also, it’s a two-way street. Your other pets have to be friendly towards the chickens as well for this to work.

Some of the animals that are most likely to get along with your Wyandotte chickens include other birds such as geese, ducks, and turkeys. They could also become friends with other livestock, such as goats and horses.

What to Feed Your Wyandotte Chicken

Wyandottes are a breed that loves to free-range and they do well in such environments. That’s not always possible though, so you can always resort to a standard commercial chicken feed with a protein content of 16%. During molting season, you can up the protein and go with a 20% blend instead. These birds will eat table scraps, vegetables, and fruits graciously, though it’s best to limit these to occasional treats.

One of the best ways to keep your Wyandottes healthy is to ensure they get to spend plenty of time in their run. This allows them to get lots of exercise while walking around, foraging, and digging for different insects that can help them have a varied diet. Moreover, they’ll get plenty of sunlight and fresh air. All of that exercise ensures your chickens don’t become obese and the sunlight, fresh air, and extra space helps prevent your Wyandottes from becoming stressed.

Breeding any type of chicken is a rather simple procedure, and Wyandottes are no exception. All you have to do is leave a rooster with your hens and they’ll take care of the rest. It’s truly that easy. But you have to make sure you only use one rooster. You can’t leave two roosters with your hens as they’ll fight each other for dominance!

Granted, there are times when eggs are more likely to be fertilized, such as the spring. Particularly in cold climates, your Wyandottes will tend to produce most of their fertilized eggs after the coldest months have passed.

Are Wyandotte Chickens Suitable for You?

Wyandotte chickens are a great choice for just about any backyard chicken keeper or homesteader. They’re excellent dual-purpose birds, so you can use them with equal success for meat and egg production. As egg layers, you can expect up to four eggs each week. Males easily reach nine pounds, offering up robust birds with tons of delicious meat.

Compared to some breeds, Wyandottes are easy to keep and low-maintenance. They’re hardy birds without any breed-specific health concerns to worry about and they’re naturally resistant to the cold, though they’re not ideal for warmer climates. Unless you live in a very warm area, Wyandottes are an excellent choice for your flock.