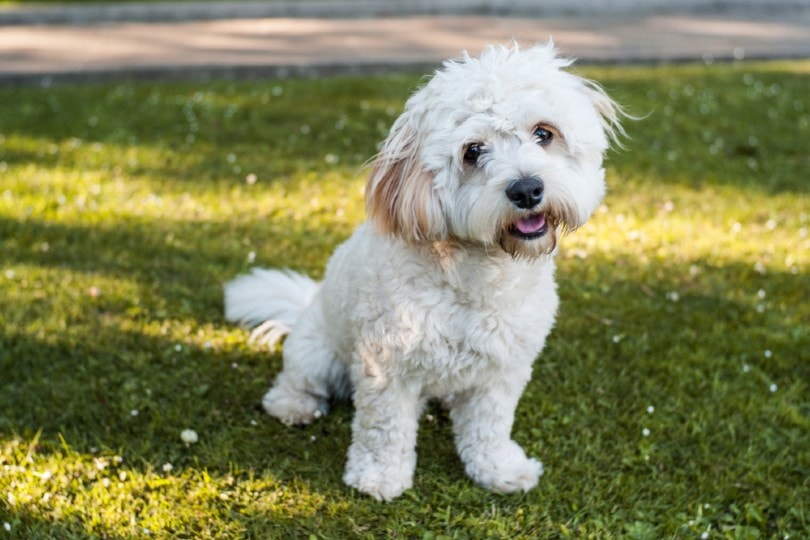 The Yo-Chon is a cross or mixed breed of the Bichon Frise and the Yorkshire Terrier. She is a small dog with a lifespan of 10 to 12 years. She has talents in competitive obedience and agility. She is a very curious dog, always exploring something but is also very social and likes to be close to you at all times. Other names she is known by include Borkie, Yorkie-Bichon and the Yorkshire Frise, as well as being referred to just as a Bichon Frise/Yorkshire Terrier Mix.

Where does the Yo-Chon come from?

The Yo-Chon is a purposely mixed dog, part of many out there today also called Designer dogs. While these have been around for a few decades their popularity really has taken off in the last ten years or so. The problem with that is while there are many more mixed breeds out there, there are also a lot of bad breeders, places like puppy mills that you really need to avoid. Therefore be careful where you buy from and do some research first. While a few have known origins and a story behind their creation, most have no information at all. Therefore we can take a look at the two purebred parents of the Yo-Chon to get a better idea of where it comes from and what goes in the mix.

Today the Yorkie as they are often referred to is a confident and clever small dog with quite an intrepid spirit. They can have a range of personalities, some are more cuddly, some are more active, some are mischievous. One thing most Yorkies have in common though is if you spoil them too much they can be difficult.

The Yo-Chon is an energetic, sometimes whacky, playful and happy dog. She is alert and intelligent and can be protective too. She can play and have fun for a good 2 to 3 hours before then wanting to take a nap. She likes to follow you around and will want lots of attention but contrarily does not like to be picked up constantly. She is a very social dog, she loves to be at the center of attention and where anything is happening. She can have an independent side but is a great companion especially for people not able to be active, and for couples and singles as well as families. She is very sensitive and she does not like to be left alone for long periods of time. She likes to investigate and is curious about everything.

Yo-Chons are a small dog weighing 6 to 12 pounds and standing 9 to 12 inches tall. She has a black nose on the end of a blunt muzzle, a round head, round eyes and her ears can be both erect or hanging down. The tail is long and the coat can be like either parents, silky and medium to long or more dense and curly like the Bichon Frise. Common colors are grey, cream, brown, white, golden, black and blonde.

How active does the Yo-Chon need to be?

In terms of size the Yo-Chon is perfectly suited to apartment living, though the barking is something to consider. She will do a lot of indoor play so that will go towards her physical and mental needs. She is considered to be slightly to somewhat active, while she can be lively and energetic being so small what she needs is still not a lot. Take her out for a couple of walks a day and let her off leash now and then somewhere safe. A yard is not a requirement but she does like to explore so it would be another place she could be outside but safe if there is one.

This dog is smart and inclined to listen. She likes to spend time with you and with the right positive approach she will enjoy the process and do well at it. Some Yo-Chon even need less repetition then some dogs making it a quicker process. Use treats to motivate her, offer encouragement and praise. Avoid getting impatient or scolding her. Be firm so she knows you are the boss but be fair and consistent. Also make sure you include socialization when you get her. She will grow to be a happier and more confident dog and you will be able to trust in how she adapts to different situations, people and places. She is not easy to house break though so this will need a lot of patience and consistency. Do not be inclined to give in just because her messes are small, with some extra effort she can be house trained.

This is dog has moderate needs in terms of grooming. While you do not need to brush daily, every other day should be fine, there are other things she needs. She is low shedding but will need regular trips to a groomers for trimming or stripping. The hair around her face will need regular trimming too. She will need a bath now and then but it should not be done too often as it will dry out her skin. Just give her a bath when she is smelly and dirty!

Her nails should clipped when they get too long, this can be done by you if you know to be careful with not cutting too low. Otherwise have the groomer do it. Her ears should be checked one a week for infection and given a wipe clean. Her teeth need to be looked after too, get her used to having them brushed at least two to three times a week.

Yorkies need socialization to be better with children, Bichons are a little better. When raised with them the Yo-Chon is good but being a small dog she is best not around small children who can be a little too rough for her. If small children are around supervise them and teach them how to be gentle and kind. Also make sure they know not to keep lifting her up all the time, she does not like it. She can get on with other pets with socialization but some do have a high prey drive so might try to chase other animals. With other dogs that socialization is important because she tends to like to challenge dogs that are a lot larger than her!

She is a good watchdog, alert and likely to bark to let you know of any intruder. She does have a tendency to bark occasionally to frequently though. She should be fed ¼ to ½ cups of a good quality dry dog food a day, split into at least two meals.

The Yo-Chon is a healthy dog in general but there are some health issues she can inherit from either parent. They include Bladder Problems, Patellar Luxation, Vaccination Sensitivity, Eye problems, Allergies, Hip Dysplasia, Reverse Sneezing, PSS, Hypoglycemia and Collapsed Trachea.

Costs involved in owning a Yo-Chon

A Yo-Chon puppy can cost between $400 to $900 depending on where you are and where you buy from. Initial costs of a medical nature like deworming, blood tests, shots, an exam by a vet, micro chipping and spaying come to about $260. You will also need some items such as a crate, carrier, leash, bowls and collar for about $120. Annual costs for simple medical needs like vet check ups, shots, pet insurance and flea prevention come to $435 to $535. Non-medical needs like grooming, food, treats, license, toys and other miscellaneous items come to about $575 to $675.

Looking for a Yo-Chon Puppy Name? Let select one from our list!

Yo-Chons are a funny and spirited dog, they have a lot to offer their owners but do have some quirks to be aware of. Many do not like to be picked up, she may challenge large dogs despite being so small and she will trail you around the home. She is probably best in a home with retired people with no children so that they have time to give her lots of attention but she could fit in to any home really.