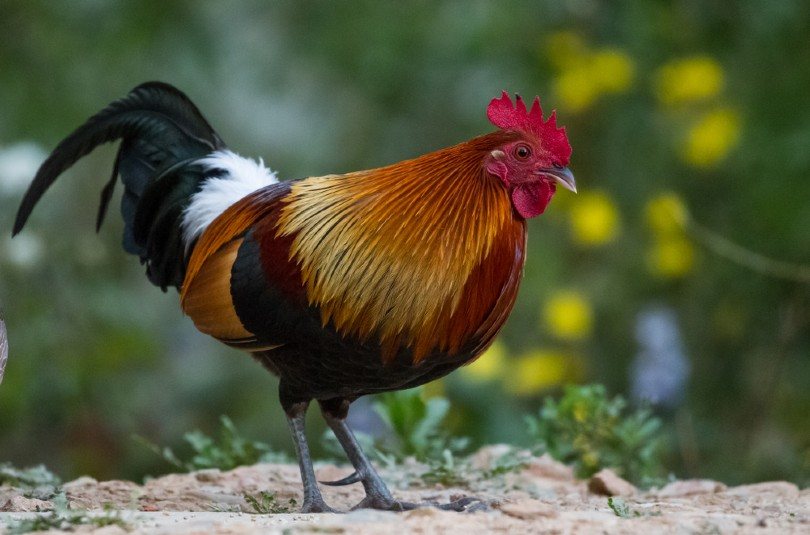 If you think of chickens as relatively docile creatures, you might want to reconsider that sentiment. Some chicken breeds—particularly the roosters—can be quite aggressive.

In fact, this aggressiveness has become the basis for cockfights around the globe. But what chicken breeds are the most aggressive?

In this article, we’ll discuss seven of the most hostile chickens around and where they can be found.

The Old English Game is one of the most beautiful chickens you’ll see. However, they are also among the most aggressive. This variety was actually specifically bred as a fighting chicken. And it’s not just the roosters either—even the hens will be quite feisty.

When keeping Old English Game chickens, you need to keep them separate from other breeds. They don’t play nice with others. And you should also keep roosters separated. They are quite territorial and will battle each other to the death.

That being said, the roosters are pretty good protectors of their hens and young. These roosters aren’t afraid of anything and will fight anything (or anyone) it perceives as a threat to their flock.

The next entry on our list is also the most popular chicken variety to be used as heritage meat. Cornish chickens were first brought over to England thousands of years ago where they were first used as cockfighters.

They are big, muscular birds and have an attitude to match. They are exceptionally aggressive towards other birds but also have a tendency to fight amongst themselves. The roosters are far more aggressive than the hens—although the hens are still aggressive themselves. Even the chicks can be mean. They’ll start pulling feathers from the weakest of the brood and eventually progress to cannibalism.

One thing that’s interesting about these birds is that they have two names. When served up as poultry meat, they’re known as Cornish chickens. But when used as cockfighting champions, they go by the name Indian Game.

Modern Game birds are a derivative of Old English Game and Malay chicken breeds. While they weren’t originally bred as fighters, they still retain some of the aggressiveness of their predecessors, although not as much.

You can train these birds to mellow out by raising hens together with a single rooster. However, you need to keep the males separated, or else their predatory nature will kick in. To keep them at their finest, you should raise these chickens free-range as they don’t do very well in confinement.

The American Game is another chicken variety that was specifically bred for fighting. They are very mean, loud, and territorial birds. They should not be kept around other chicken breeds or else they will not hesitate to attack. Also, two roosters in a single flock can spell absolute disaster. If not kept separate, they will fight to the death the first chance they get.

They are also not keen on new additions—whether it be new hens or even their own young. They will bully their hens and even kill their own young. American Game birds aren’t good as poultry meat, but their gorgeous colorations make them excellent show birds. This breed also has quite a rich history as they were the breed that George Washington, Thomas Jefferson, and Abraham Lincoln raised.

While many of the chickens on this list are raised primarily as cockfighters, the Asil takes the title as the most combative chicken on the planet. They are natural fighters as they often start fighting within their first week of hatching! If the males are not separated within 3 months, they will begin engaging in battles to the death for their own sport.

These chickens originated in India where they were raised specifically for chicken death battles. Centuries later, they were introduced into Europe where their bloodthirst continued. Most Asil owners understand the dangerous nature of this bird and are careful when handling and caring for them.

These chickens are known by many names, but one thing remains the same: they have a natural instinct for fighting and defending their territory. Oriental Game birds are one of the last bastions of ancient chickens as they more closely resemble the first domesticated chicken than any other chicken breed. They are still primarily wild birds and can fly exceptionally well.

One subvariant of the Oriental Game known as the Sumatra is the best flyer of any chicken breed. In good wind conditions, they can fly up to 5 miles without landing.

Oriental Game chickens are extremely hostile and will often begin fighting each other immediately after hatching. Fortunately, the mother hens are very good mothers and break up these squabbles before things get out of hand.

While not the most popular chicken fighter, the Malay breed may possibly be the most dominantly, aggressive breed on this list. They’re full of gruff and have a body to go along with it. Standing at 3 feet tall, the Malay is equipped with sharp beaks and powerful legs.

These attributes seem to wipe fear completely away from these birds. It’s not uncommon for them to attack cats, dogs, or even humans. And they will kill other chickens without hesitation.

Why Raise an Aggressive Chicken?

There are a few reasons why some might want to raise an aggressive chicken breed apart from cockfighting. Many of these birds can be absolutely stunning and do very well in bird shows.

Also, some of these chickens—such as the Malay—make for great guard chickens. They’ll protect their territory from anything or anyone with fewer care requirements than a dog. Whatever the reason, though, chicken handlers must be very careful when dealing with any of these aggressive breeds.