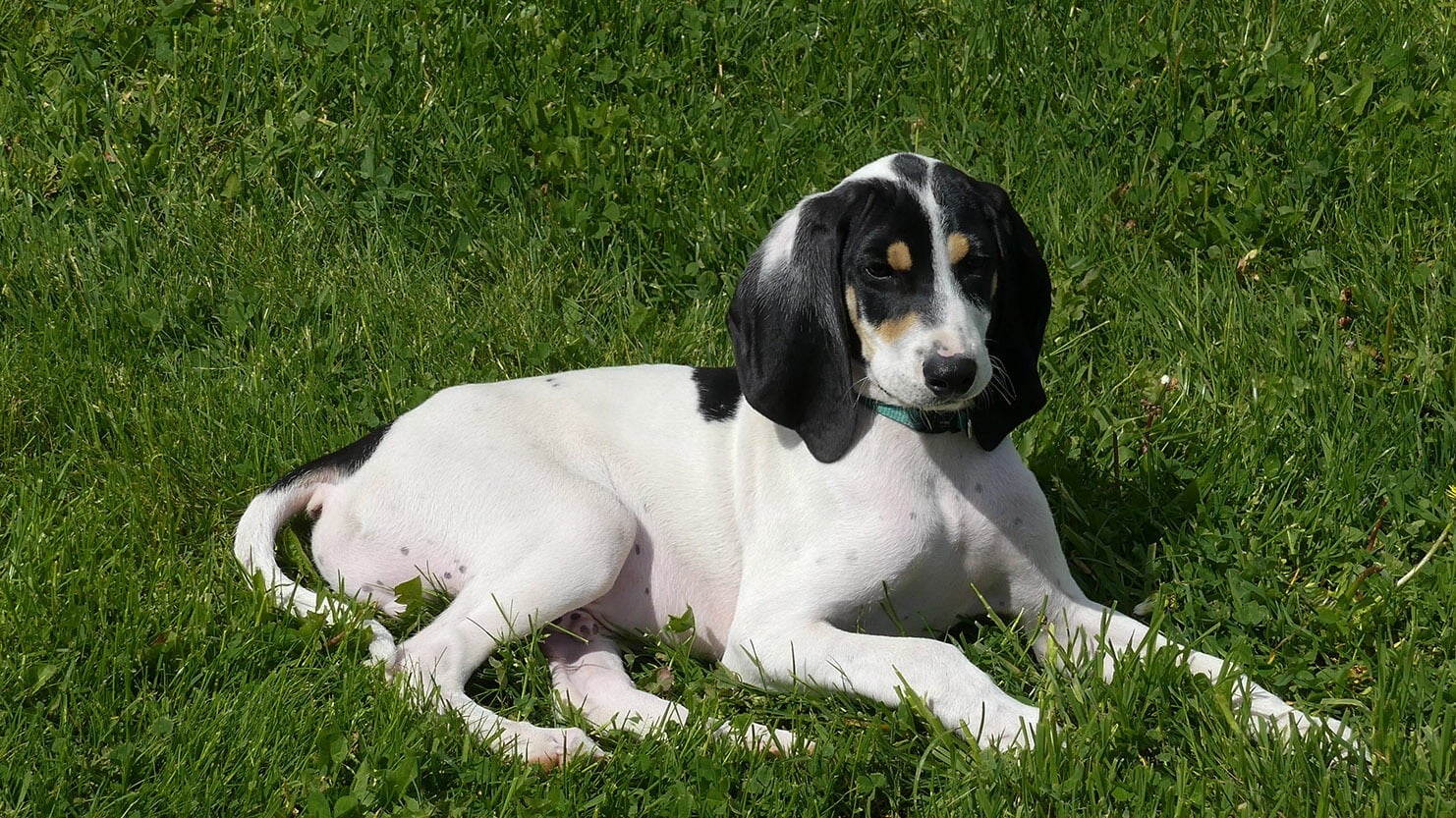 Ariegeois Pointers are known in France, but they are known very little outside of continental Europe. Although this breed is not world known, it is very loyal, loving, and fun. It is even great with children and other dogs because it is one of the least aggressive breeds around.

Being a mixture of three other dogs that originate in France, the Ariegeois Pointer has ancient roots, even though it is a relatively new breed. This may be the breed for you if you are really active and have a lot of land for it to roam on.

Still, Ariegeois Pointers are not a great breed for everyone. People who are not active, do not have a lot of land, and have small animals in their household should not select this active breed. In fact, this is a breed that is best for experienced dog owners who go hunting and do other active pastimes frequently.

To find out more about Ariegeois Pointers, keep reading. In this guide, we provide you everything you need to know about the breed so that you can best determine if it is right for you.

Ariegeois Puppies – Before You Buy…

What’s the Price of Ariegeois Puppies?

Because of this fact, it can be really difficult to find Ariegeois puppies, especially if you live in the United States. You probably will not find one at a shelter, and you need to shop around to find breeders near you.

Once you locate an Ariegeois Pointer breeder, expect to pay at least $1,000. Most likely, you will need to pay more than that. This does not include the cost of getting the dog spayed or neutered, which can add an additional $220 to the pup price.

Going through the other veterinary necessities can cost up to $85. Additionally, you will need a license, collar, leash, and possibly a crate. Considering all these factors, it may be more realistic to expect to pay around $2,000 for the puppy and all its puppy needs.

The Ariegeois breed is considered a modern breed, but it has ancient roots. This hound is a mixture of Briquettes, the Grand Gascon-Saintongeois, and the Grand Bleu de Gascon. These three breeds are all from France and the Briquette has been around since pre-Roman times for hunting purposes.

The Grand Bleu de Gascon has even older roots. Experts believe that this breed migrated to France with the Phoenicians. The Phoenicians were a leading empire that had trading posts all throughout the Mediterranean basin. This included parts that extended into Spain and France.

It wasn’t until the 19th century that the three dog breeds were bred together to create what is now known as the Ariegeois. Although it is known throughout continental Europe for its hunting purposes, it is known very little elsewhere. The American Kennel Club does not even recognize it yet.

Even though Ariegeois Pointers were bred in the 18th century, they actually almost went extinct during World War Two. This time period was really dangerous for people and dogs alike in continental Europe. This caused the Ariegeois, among other breeds, to nearly die out.

However, some dog lovers wanted to rescue the breed from extinction. This created an intense breeding program that allowed the Ariegeois to become prominent once again. In 1998, the breed even became recognized by the United Kennel Club.

3. There are few stats reported about the breed.

Even though the breed is popularly known throughout France and continental Europe, there are actually very few statistics reported about the breed. Most notably, very little information is detailed about their health and breed conditions. For these reasons, it can be a bit difficult to find out information about these dogs.

The reason that very few stats are reported about this breed is that they aren’t popular around the world. They are popular in France and parts of continental Europe, but they are relatively unknown elsewhere. This causes them to have way fewer statistics reported than other world-famous breeds.

Temperament & Intelligence of the Ariegeois

Ariegeois Pointers are calm, loyal, and great for people. Because they were bred for hunting purposes, they are especially good for active families, but they may not be ideal if you have other small animals in your household. Luckily, they are easy to train and will be a dedicated friend for life.

Ariegeois Pointers are considered good dogs for families. They generally get along great with humans, though they may be a bit skeptical around strangers. Nevertheless, they are super fun and loving, even around children.

Still, you always need to socialize any dog early. Early socialization will help the dog acclimate to family life. Additionally, don’t allow children to play with any dog, including an Ariegeois, unsupervised. Supervise playtime to ensure that the dog is not being aggressive, and that the child is playing with the dog properly.

Ariegeois Pointers were originally bred as pack dogs. For this reason, they get along really great with other dogs. This is especially true of dogs that match their energy level and easygoing nature. If you already have dogs in your household, this could be a great breed to bring into the mix.

Things to Know When Owning an Ariegeois:

Ariegeois Pointers are not considered a particularly difficult dog to train, but they do have specific exercise requirements. Other than that, they are generally easy to take care of. Still, their high energy makes them less suited for new dog owners.

Feed Ariegeois Pointers 2.5 to 3 cups of high-quality food each day. It’s best to separate that over 2 meals. For example, feed the dog 1.5 cups of food morning and night. You may need to adjust the serving size based on the dog’s age, level of activity, and health needs.

It’s important to select a dog food that is made from high-quality ingredients. The food should have a lot of nutrients and should not contain a lot of fillers. Look for dog foods that include high amounts of protein and low amounts of carbs.

Because Ariegeois Pointers were hunting dogs, they have a lot of energy and need to be exercised frequently. This dog is best in country or rural settings. At the very least, the dog needs a big backyard to run in. This is not an ideal dog if you live in an apartment or plan to ever move to one.

Unlike many other active dogs, Ariegeois Pointers are actually pretty happy to be lazy, but they are happiest when being active. It’s a great idea to create tracking and agility work games to keep the dog physically and mentally active. A walk a day will not cut it with this breed.

Because this dog requires so much exercise and play, it is not a great breed for new dog owners. Unless you already have the capacity to handle a dog of this nature, the breed can easily become overwhelming, to say the least.

Ariegeois Pointers are considered relatively easy to train dogs. They are highly loyal and like pleasing their owners. This makes them much easier to train than other dogs. If you specifically use positive reinforcement during the training process, the Ariegeois will likely start listening very well.

As with any other hound, the dog can be a bit stubborn and have a mind of its own. If you create a good bond with the dog and exercise it properly, however, you should be able to keep the stubbornness at bay.

Ariegeois Pointers have coats that are short and smooth, making them easy to groom. They shed an average amount, meaning you’ll need to vacuum and clean up the hair accordingly. You can keep their coat and skin healthy by brushing the coat out with a firm bristled brush.

Whenever the dog gets dirty, give it a bath using dog shampoo. It’s best to only bathe a dog whenever it is really dirty or smells bad. Do not bathe the dog too often because this could deplete the oils from its skin.

You will likely not need to clip Ariegeois Pointers toenails often since they are so active, but you will need to clip them if you notice them getting long. Make sure that you do not cut the sensitive part of the nail for this can lead to bleeding.

Very little is actually known about the health conditions for Ariegeois Pointers. This is because the dog is uncommon, leading to fewer reports and studies. As a whole, it seems that the breed is healthy and has very few health issues to be concerned about.

As we already mentioned, Ariegeois Pointers seem to suffer from ear infections quite frequently. Cleaning out their ears regularly can help to prevent this from happening. The breed can also experience field injuries from their work and activity.

Because these dogs are so active, they can suffer from hip dysplasia, elbow dysplasia, and progressive retinal atrophy. Additionally, they may experience cataracts. Almost all of these serious conditions are brought on by old age.

Something else we should mention is that the dogs only have a life expectancy of 10 to 12 years. This is actually on the lower end of the spectrum for dogs of its size, but it is unclear as to why this dog lives a shorter life than other medium-sized breeds.

There is very little difference between male and female Ariegeois Pointers. Males can be slightly larger, but the size difference is not that noticeable. Their personalities are very similar as well. Early socialization and training are key for both males and females.

You certainly should select a different breed if you don’t have a large backyard and don’t intend on being very active. A walk a day is not enough for this active breed. Most city dwellers will do best opting for a lazier dog.

If you are still sold on the Ariegeois Pointer, remember to shop around for a breeder. Especially if you do not live in France, it can be difficult to find this breed. Once you do find a breeder, expect to pay at least $1000 for the puppy alone. Though this is a high price tag, it may be a price tag worth it if you want a dog that is loyal, fun, and family-friendly.