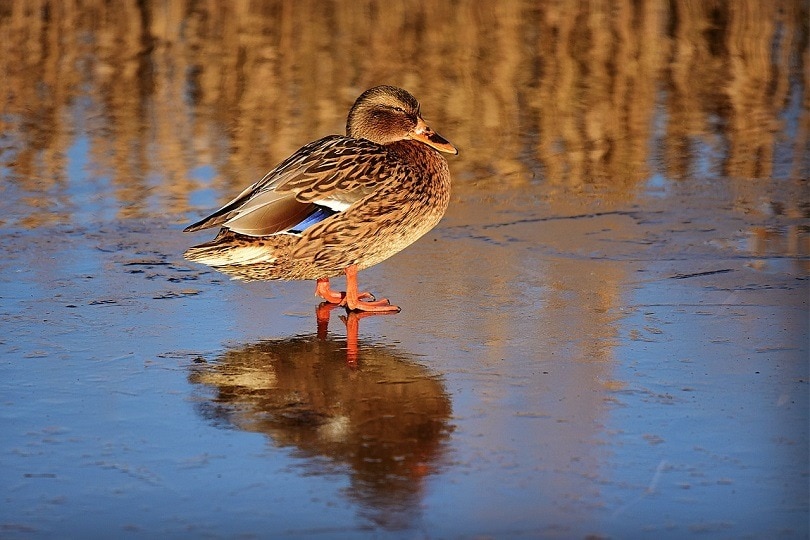 Ducks come in a wide array of colors and patterns, including black, white, green, blue, fawn, and red. While brown ducks aren’t the most coveted colored birds, they do possess a certain visually undemanding aesthetic.

If you’re wondering what types of duck breeds are brown, keep on reading our comprehensive guide.

The Blue Swedish duck is primarily bred for utility and exhibition purposes. Originally from the Baltic shores of modern-day Germany and Poland, the Blue Swedish breed is identified by its uniquely colored plumage. What appears to be brown is actually a dilution of black. These ducks also have white bibs and slate blue or dark green bills.

The Campbell duck was developed around the turn of the 20th century in the United Kingdom. It’s a dual-purpose breed for having good table qualities and high egg production rates. In fact, Campbell ducks can produce over 300 eggs per year. Campbell ducks come in brown, khaki, fawn, and white colors.

A distinctive breed, the Hook Bill duck is quite rare in the U.S. and Europe, with only 250 to 400 breeding birds known to exist. They are named for their elongated beaks that curve downward. Hooked Bill ducks are one of the rarest domesticated duck breeds in the world and can be traced back over 400 years. In fact, Charles Darwin wrote extensively about the breed and even kept them in his backyard pond. Hook Bill ducks can be brown, blue, white, and grey.

Bred for its meat and eggs, the Orpington duck was created in 1890 as a dual-purpose utility bird. It is capable of producing more than 200 eggs annually. The Orpington duck has a long body, a deep and broad carriage, and a yellow bill. Its buff-brown feathers have a reddish undertone.

The Welsh Harlequin is a utilitarian duck breed used for its prolific egg production. It can lay between 150 and 250 eggs per year. The breed was originally developed in the late 1940s in Wales. Their sex-linked characteristics make it easy to determine the sex of the bird with over 90% accuracy when they are only days old.

These five brown duck breeds all have their own unique characteristics and purposes. While their brown plumage may not be the most striking, some breeds are capable of producing hundreds of eggs each year, making them a vital part of the world’s food industry.