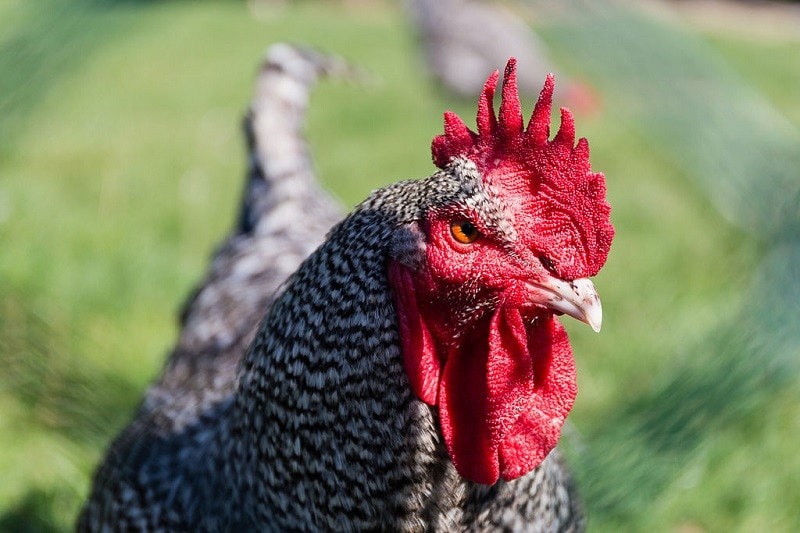 Most people have no idea how many different breeds of chicken you can find in the world. Some counts exceed 80, while others claim the numbers are in the hundreds. Some species are limited to a small area of the world, while others are shipped worldwide. We are going to look at the breeds that come from France to see if there are any you would like to add to your coop. Keep reading, and we’ll supply you with an image and a short description of each breed to help you make an educated purchase.

The Ardennaise is an endangered domestic chicken from France. It began in the late 1800s and did well for several years before its population began to decline. After World War I, these birds fell out of favor in preference of other breeds that were better egg layers. There is a Bantam version of this chicken as well as a tailless version.

The Bresse Gauloise is a white chicken with a single-point comb. They were popular in the early 1900s, and farmers used them for meat due to their plump size, but they are also excellent egg layers.

The Coucou des Flandres is a critically endangered bird that breeders created by mixing several Oriental chickens. It disappeared during the first World War, but breeders recreated it soon after. It has pinkish-white legs and a single-point comb.

The Coucou de Rennes is another rare breed from France that a few caring breeders maintain. It has a unique plumage of white and black with a bright red comb.

The Crèvecœur chicken is an endangered chicken from France that is even harder to pronounce than type. No one knows where this chicken originated, but some chicken clubs began to recognize it in the early 1900s. It has a puffy crest similar to the Houdan breed and is usually black, but you can also find them in blue, white, and cuckoo. It’s a gentle and kind bird that doesn’t mind captivity.

The Eestairs chicken is from northern France and is a relative of the Longshan breed. It has a small, jagged comb, dark blue or black legs, and black plumage with green highlights. You can also find varieties with a gold or silver neck, but they are quite rare.

The Faverolles chicken gets its name from the French village that created it. You can use it for laying eggs and for meat, but due to its long multicolor plumage, owners usually use it for exhibition. It’s also a gentle bird that rarely becomes aggressive, making it a popular choice for a pet.

The Houdan is an ancient French chicken also named for its point of origin. It has small earlobes and a backward flowing crest, giving it a winded appearance. Its thick plumage can partly hide its V-shaped comb, and it usually has mottled feathers of black and white.

The La Flèche chicken is another unique breed from France that has a distinctive appearance. It’s a large bird with a V-shaped comb and light-colored earlobes. It usually has black feathers, but you will occasionally see it with other colors like white. Breeders exported a few to the United States in the 1800s, but the climate was too harsh for them.

The Marans chicken is from southwestern France. Breeders created it from feral chickens that had once been fighting chickens. Breeders have improved it since that time, and you can find this bird in several colors, including black, silver-black, copper-tailed, silver-cuckoo, and others. They usually have orange eyes and their legs are slate or pink in color.

We hope you have enjoyed reading over this list and have found a few chickens that you might like to add to your farm. If you’re interested in purchasing a French bird, we recommend the Houdan, as it is likely the most popular and the easiest to find. Several other chickens on this list will be considerably more expensive, and some may even be impossible to find for sale.