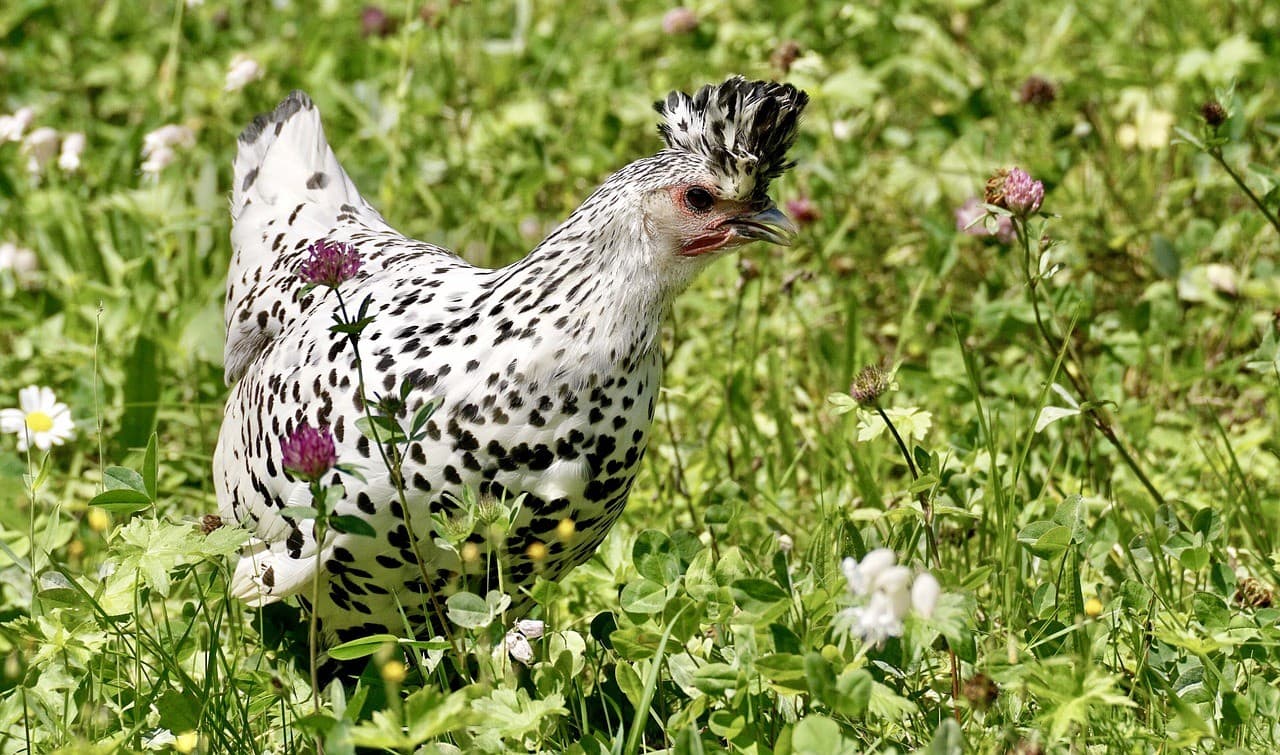 These breeds can vary significantly in the actual color patterns, size, and temperament despite their relatively similar coloration.

Therefore, before you go looking for a black and white chicken, it is important that you first familiarize yourself with the various stocks available. This will allow you to make an educated decision.

In this listicle, we will take a look at 10 of the best black and white chicken breeds that are out there today.

As mentioned, black and white chicken breeds sport different patterns on their feathers. Those patterns or color schemes are what allow us to distinguish black and white breeds from one another. In some cases, patterns can even help you to determine a bird’s sex. These include:

Barred patterns are those that feature stripes. However, they are more noticeable when you check out each feather individually. As a whole, the bird’s plumage might not show obvious stripes. This is why you will need to pay attention to the details.

In the Columbian scheme, seemingly random black patches on a white chicken characterize this pattern. These are usually on the neck, wings, and tail. This phenomenon is an effect known as the black restrictor, which prevents the color black from being expressed on other parts of the bird.

Here, the chicken’s feathers are darker at the edges, hence giving them a laced look. They almost look like they are sporting a dark trim.

A post shared by Long Island Silkies And Polish (@long_island_silkies_and_polish)

Feathers that lack pigmentation on their ends or edges characterize this pattern. Essentially, they are black birds but with white tips on the ends of their feathers.

This is a remarkably beautiful black and white pattern. Feathers with a trim on either side characterize this scheme.

Here, the feathers do not have pigmentation at the center. This results in numerous round spots all over the body.

The Most Popular Black and White Chicken Breeds

Ready for some chicken? The following are some common black and white chicken breeds you should check out.

This bird sports the barred pattern on its plumage. Bred in the Americas, the Barred Rock is a black and white variation of the Plymouth Rock family. While its barred plumage resembles that of a Dominique chicken, the Barred Rock’s stripes are straight, whereas those of the Dominique sport a distinctive “V” shape.

With a weight of between 7.5 and 9.5 pounds as adults, barred rocks are anything but small. Additionally, they are quite hardy and can adapt to almost any environment.

Barred Plymouth Rocks are typically kept for egg production. A hen lays as many as 280 large brown eggs annually. However, they can be kept for meat, too, due to their larger size. Nonetheless, they tend to be rather broody.

Sporting a laced pattern consisting of a black trim on white feathers and a cute black tail, the Black Laced Silver Wyandotte is one incredibly striking bird.

Despite its lovely looks and friendly disposition, this bird is quite hardy. And it can weigh a respectable 8.5 pounds when fully grown. Additionally, Black Laced Silver Wyandottes make good egg producers, with hens laying between 180 and 260 eggs every year.

A cross between the Barred Rock and the Rhode Island Red Rooster, the Black Sex Link is a unique breed, as the cocks and hens sport different plumages. Black Link roosters sport a black and white barred pattern, while the hens come with black bodies and brown necks.

This breed is a prolific egg layer. With proper care, black link hens are capable of laying up to 300 large, light brown eggs every year. And they aren’t broody. You can expect a weight of between 6 and 9 pounds on average. Nonetheless, they do not make great table chicken, which is why they are not kept for meat production.

Another American staple, the Columbian Wyandotte is a beautiful breed, sporting black and white plumage on its neck, wing ends, and tail while the rest of the body is white.

Despite being named after the North American Wyandot tribe, Columbian Wyandottes do not have any ties to that tribe. Rather, it is a cross between a Barred Rock and a white Wyandotte.

When fully grown, Columbian Wyandottes weigh between 6.5 and 8.5 pounds. While they are large birds in their own right, they appear even larger due to their loose feathers.

The Columbian Wyandotte is a dual-purpose breed. As an egg layer, it can produce between 200 and 250 brown eggs each year. Thanks to their hardiness, they lay eggs even during winter. They taste great too, which is why some people keep them for meat production.

The Cuckoo Marans gets its name from the French town of Marans, where it originates. Its barred pattern bears a striking resemblance to that of the Barred Rock, which is why the two birds are often mistaken for each other. Cuckoo Marans are fairly large birds weighing between 7 and 9 pounds when fully grown.

This breed can be kept as an egg-layer, meat producer, and show animal. As an egg layer, hens lay between 150 and 200 eggs annually, and their eggs are quite large.

Dark Brahmas are one of the oldest chicken breeds in the world. Brahmas trace their roots back to Asia. They are the result of crossing a Grey Chittagong chicken with a Shanghai chicken. In 1852, the breed was christened “Brahmaputra,” after the Asian river. Later on, it simply came to be known as the Brahma.

Dark Brahmas are some of the largest chickens out there, as they can weigh up to 12 pounds when fully grown. What’s more, they feature heavy feathering, which makes them appear even larger. Thanks to that dense plumage, Dark Brahmas are extremely resilient to cold. This is why they have earned the title of “King of Chickens.”

Due to its large size, the Dark Brahma is a great table bird. It does relatively well as an egg layer, too, making up to 150 eggs annually. Despite its rather intimidating look, this bird is a sweetheart and rarely broods.

Sporting a barred pattern, the Dominique is thought to be the oldest chicken breed in North America. On average, individuals from this breed weigh between 5 and 7 pounds.

Dominique chickens are primarily kept as egg layers. The hens can lay up to 260 eggs annually. However, they are a good source of meat, too, especially if you are into yellow meat. Moreover, they make great show birds, thanks to their exquisite plumage.

What’s more, Dominique chicken feathers are highly sought-after, as they make great stuffing for pillows and mattresses. If you are looking to make some money, look no further than the Dominique.

The Light Sussex is a European breed and comes with a predominantly white body with black edgings on their necks and tails.

This bird is a prolific egg layer and a renowned producer of high-quality meat. As an egg layer, it produces up to 280 eggs annually. However, it is not short on broodiness. As a meat producer, it makes such a great table bird that it rivals breeds kept specifically for that purpose.

What’s more, the Light Sussex’s glorious plumage makes it a good show bird. To top it all, it is incredibly hardy and has a friendly disposition.

Originating from the Italian town of Ancona, this breed features a mottled pattern on its plumage. Its feathers are predominantly black, sporting white spots at the end. Thanks to its tightly packed feathers, the Mottled Ancona is extremely resilient to cold.

This breed weighs between 4.5 and 6 pounds, on average, meaning it is a medium-sized bird. Mottled Anconas are kept for egg production, laying up to 280 eggs per year.

Are you looking for a show bird? Look no further than the Silver Laced Polish. Originating from Poland, this breed sports a comical appearance. The feathers on its head stand upright to form a capped crest with a beak. You can barely see their eyes. They are incredibly striking, which is why they are popular show birds.

These birds are good egg layers, too, making up to 200 eggs annually. However, they do not make great table birds.

If you are a chicken lover, you will be spoiled for choice especially when it comes to black and white chicken breeds. While your needs will obviously dictate the breed that will suit you best, any of the above breeds would make a great addition to your flock.

For more on chickens check out these helpful posts: