How Does a Rooster Fertilize an Egg? 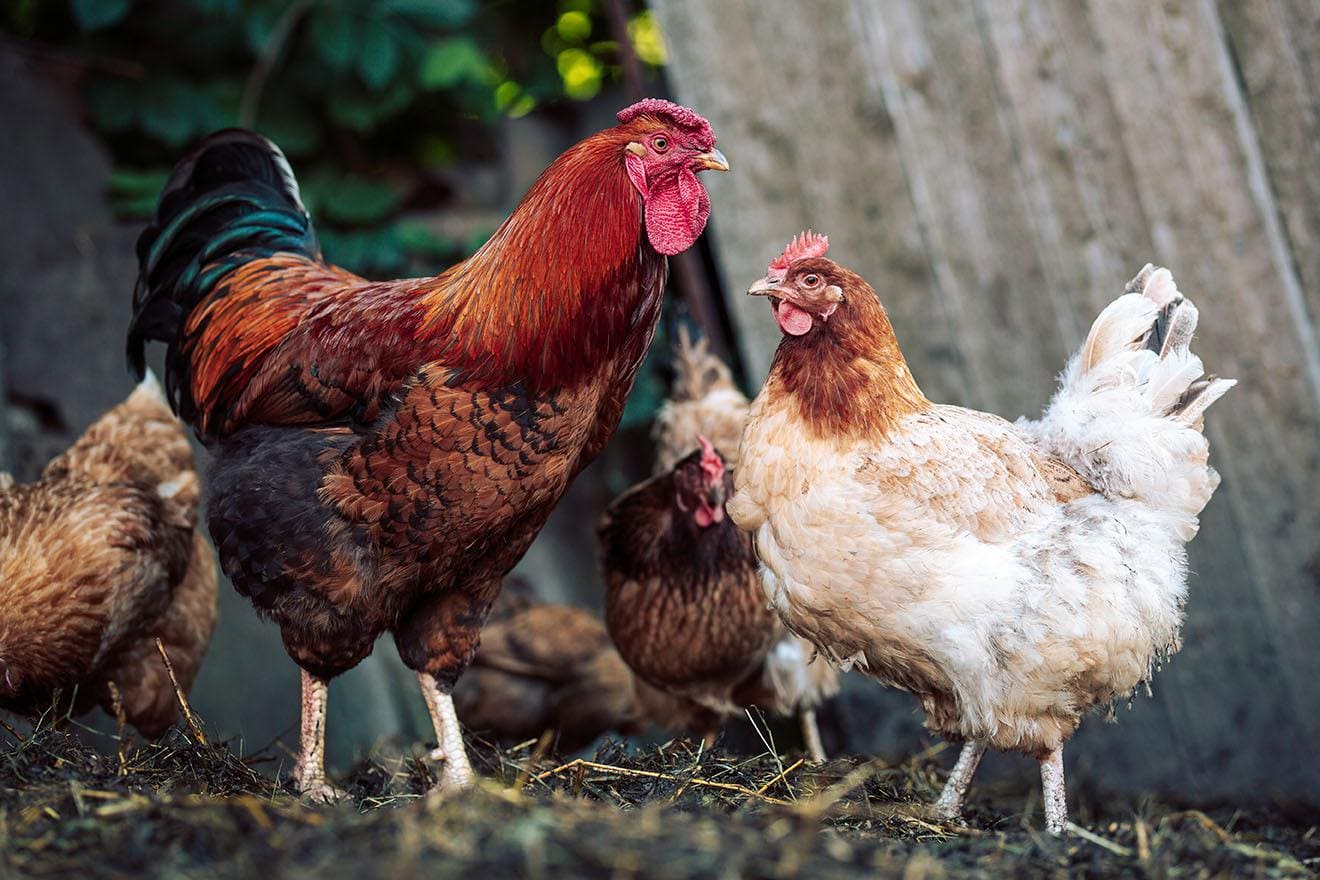 Hen eggs are not fertilized when they are laid. For a hen to lay fertilized eggs, she needs a rooster. The rooster will fertilize the eggs of up to 10 hens. He must mate with the female hen so his sperm travels into the oviduct and fertilizes the eggs that the hen lays in the next few days. If you are looking to expand or maintain the size of your flock, you will need a rooster and you will need to ensure that your hens and rooster are mating.

In this article, we explain how to successfully get your hen’s eggs fertilized and the steps surrounding the process.

During springtime, roosters are more active in their mating quest. At this time, they may exhibit courtship patterns.

In some cases, there is no courtship or ritual, and mating between the rooster and a hen can be aggressive, leaving the female with injuries.

Roosters have a pecking order, and it is usually the youngest and fittest rooster that is at the front of the queue. He will fend off interest from other roosters, and this may lead to aggression and fighting. The more submissive of the two roosters will usually run away and bide his time. The dominant rooster will have to contend with this for two years or so, but by the time he reaches three years of age, he will normally find that younger and fitter roosters will take his position and he will become a secondary rooster.

The hens assess roosters according to their ability to look after the flock, provide food, and stave off other roosters. Colorful and large combs and wattles are also considered highly attractive to females. If a hen does not like a rooster, she will not always mate with him, even if he is the only rooster in the coop.

A single rooster will usually service around 10 hens. Any more than this and he can become stressed trying to manage the hens. Any fewer and the hens can become battered and overworked.

Even with the ideal ratio of males to females, it is not unusual for a rooster to have one or two favorite hens: ones that he returns to in preference to others in the flock. These hens can become over-used. They may have damaged skin and show a loss of feathers around the back and neck. Hen saddles can be placed on the favorites to prevent this damage from occurring.

How Do Chickens Mate?

The actual process of mating is relatively quick. Once any courtship has been completed, the rooster will hop on the hen’s back. If the female is compliant, she will squat and drop her head and body. By also spreading her wings, she is showing her willingness. The male will tread to help him get balance and will usually grab the comb to further steady his balance.

Once the rooster is in position, he drops his tail down and delivers a cloacal kiss. A rooster does not have a penis, but rather a bump inside the cloaca called the papilla. This delivers the sperm. The hen must extend her cloaca so the sperm reaches the waiting eggs. The sperm will fertilize the day’s eggs, and some will also collect in sperm pockets, from which it can fertilize eggs for the next four or five days.

Once the mating process is complete, the rooster will usually walk away and the hen will collect herself and carry on.

What Age Do Roosters Start Mating?

Cockerels usually reach sexual maturity at the age of 4 to 5 months of age. At this age, they will usually produce sperm and start to act like roosters. The amount of sperm that they produce will diminish as they age, but a rooster will normally remain active for several years.

Why Do Chickens Run Before Mating?

Sometimes, when the hen does not want to mate, she will run away. The rooster will chase after her, hold her down, and mate her.

How Many Times Can a Rooster Mate in One Day?

Roosters are highly virile birds. They can produce between 100 million and 5 billion sperm during a morning session and still deliver tens of millions of sperm later in the day. A typical rooster can mate between 10 and 20 times each day.

How Do You Know If a Rooster Has Fertilized an Egg?

The simplest way to check if an egg is fertilized is to open it. A fertilized egg has a yolk that has a white ring around it. Opening the egg, however, means that it is no longer viable.

Candling is a common process. Allow the egg to incubate for a few days, take it into a dark room, and shine a bright light under the large end of the egg. If it is fertile, you will be able to see a dark spot surrounded by veins. Otherwise, you will just see the round shape of the yolk. Candling is done on days 4, 10, and 17 to check that the embryo is developing.  The process is called candling because candles were the traditional method, though nowadays, chicken farmers tend to use a bright light or specialist light.

How Many Eggs Does a Rooster Fertilize at One Time?

Initially, the rooster will fertilize a single egg, commonly referred to as the “egg of the day,” but sperm is collected in sperm pockets and can fertilize eggs in the coming days. This sperm can remain viable for up to two weeks, although five days is a more common timeframe. If the hen is productive and the sperm remains viable for two weeks, however, a rooster could fertilize 14 eggs from a single mating.

How Does a Rooster Fertilize an Egg?

Roosters are sexually active from several months after birth, and it is their job to ensure the survival of the flock by mating with hens and fertilizing eggs. They take this job seriously and may employ courtship rituals such as tidbitting and rooster dancing, although some forego these rituals and try the more direct approach. The rooster will hop on the hen’s back and perform a cloacal kiss, delivering sperm into the oviduct. This will fertilize the egg of the day and can fertilize eggs for a week or so afterward. Now you know how chickens mate!

Looking for more information on roosters? Take a look at: