Male vs Female Peacocks: How to Tell the Difference (With Pictures) 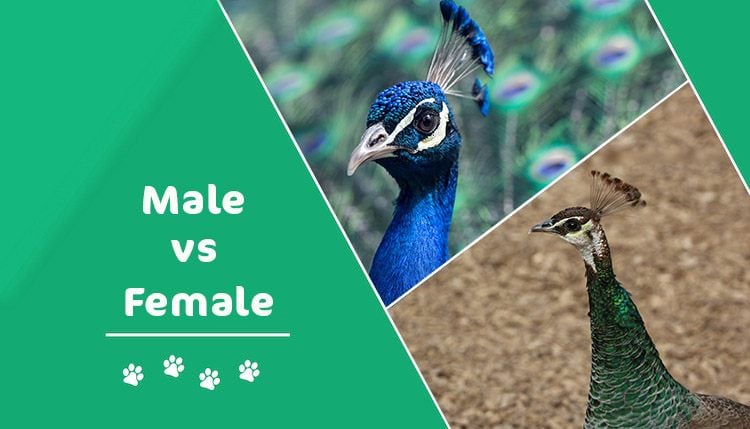 The most obvious difference between the peafowl sexes is their coloring. Males are the more attractive of the two, featuring vibrant blue and/or green feathers that are hard to look away from when they are fully extended. Their bright feathers are designed to impress females during the mating season.

Female peafowl feathers are more muted than the males’ and may not be blue or green at all. Many females sport brown or gray feathers that help them camouflage themselves into their surroundings when predators get too close. Also, peacocks have blue or green bellies to match their plumage, while peahens have white bellies.

Another thing that can give away a peafowl’s sex is their size. Peacocks are noticeably larger than peahens and typically weigh anywhere from 9 to 13 pounds once they reach maturity. Females usually weigh between 6 and 9 pounds. The boy peafowls are also about a foot longer than the girls when fully grown. Tail size is another difference.

The peacock has a long, vibrant tail that can grow up to a whopping 75 inches in length. Females have much shorter tails of between 2 and 6 inches. Their tail feathers are dull, and they cannot fan their tails out like their male companions can. The male’s tail comes in handy during mating season and helps offer protection against predators.

Peacocks have long, elegant necks with blue feathers that look like soft fur. Peahens have long necks too, but their neck feathers are usually greenish or bluish, and they look more like scales than fur. Girls can ruffle their neck feathers, while boys cannot. Their eye markings are also slightly different.

Both males and females have distinct white markings above and below their eyes, but the markings below the female’s eyes typically match their skin color, so they cannot be as easily seen as they can on males. Also, the crest of feathers on top of a peafowl’s head differs depending on the sex. The crest consists of long shafts that stick up from the bird’s head and carry small clusters of feathers on top. The crest feathers on boys are typically blue, while those on the girls are usually brown or tan.

Both male and female peafowl take different actions on a daily basis. Males fan their tails out whenever they want to impress a female or get attention through fields of tall grass or foliage. Females do not fan their tail feathers, but they do ruffle them when fighting with other peahens or alerting another peafowl of danger in the immediate area. Males spend most of their time alone, while females tend to the babies and build nests during the day. Female peafowls are usually more sociable than males, but they are also more territorial overall.

The next time you see a group of peafowls hanging out together, you should know which are the males and which are the females within just a couple of minutes. Can you think of any other ways to tell the difference between male and female peafowls? If so, feel free to share it in the comments section.