The 12 Most Dangerous Animals in the World: Statistics to Know in 2022 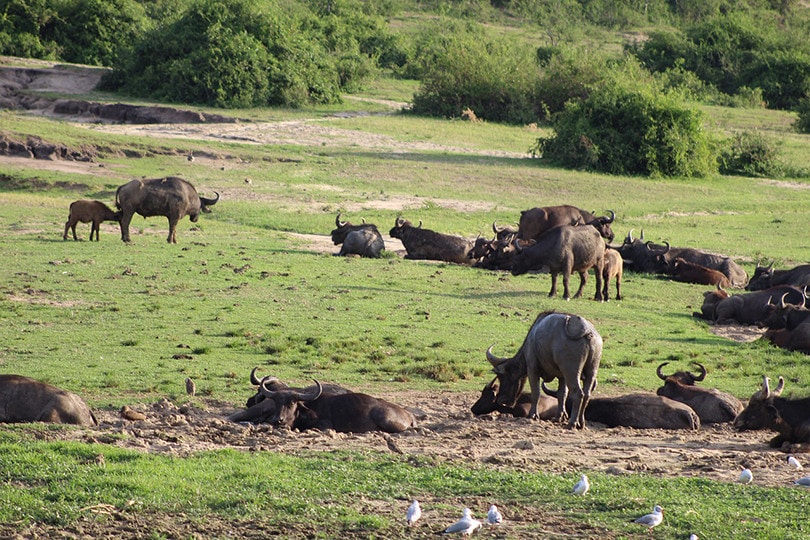 Hollywood may suggest that the greatest animal threats to humans include sharks, crocodiles, and bears, but many of the deadliest creatures are much smaller and kill through venom or poison, rather than sharp teeth and claws.

From ferocious beasts to minuscule killers, here are the 12 most dangerous animals in the world and where to find them.

12 Most Dangerous Animals in the World Statistics

1. Cape buffalo are highly aggressive and kill about 200 people per year.

Cape buffalo are one of Africa’s “Big Five,” or the top five deadliest animals. These large herbivores live in herds and have massive horns, which they use to defend themselves and their companions. Highly aggressive, a cape buffalo will attack alone or in groups if threatened. In fact, lions are fearful of challenging the cape buffalo. Each year, the cape buffalo kills roughly 200 people.

2. Elephants are defensive and kill about 500 people per year.

Elephants are critically endangered and viewed as gentle giants, but they don’t hesitate to attack when threatened. These large land mammals can weigh up to 13,000 pounds. Elephants kill about 500 people each year.

3. Hippopotamuses are fiercely territorial and kill about 3,000 humans each year.

Hippos are primarily water-dwelling creatures that spend most of their time in the waters in Africa. They are fiercely territorial and attack anyone that invades their space, sometimes chasing them onto Hippos can run up to 20 miles per hour and have huge mouths with 20-inch tusks. On average, hippos kill up to 3,000 humans each year.

4. The Nile Crocodile is a fearsome predator that kills roughly 200 people per year.

Nile crocodiles can grow up to 16 feet long and weigh around 500 pounds. Because humans share water sources with crocodiles, they have run-ins that may lead to attack. Nile crocodiles kill around 200 people per year.

5. The source of African trypanosomiasis (sleeping sickness), the tsetse fly, kills about 10,000 people each year.

Though small, the tsetse fly is a bloodsucking insect that carries the parasite responsible for African trypanosomiasis, or African Sleeping Sickness. This disease can be fatal without treatment and causes symptoms like seizures, coma, ataxia, thyroid dysfunction, and myocarditis. It’s estimated that 10,000 people die from the disease each year.

6. Whitetail deer rarely attack humans, but they cause about 150 fatal car accidents.

Whitetail deer are abundant in North America. Though they rarely attack humans, deer are often involved in vehicle collisions due to their proximity to developed areas. Approximately half a million deer-vehicle collisions occur in the US each year, leading to about 150 deaths and $1 billion in vehicle damage.

7. Hymenoptera (wasps, bees, and hornets) stings are the underlying cause of roughly 62 deaths each year.

The Hymenoptera family includes bees, wasps, and hornets. These insects sting humans, causing pain and discomfort. For people with allergies to Hymenoptera venom, however, stings can be fatal. Members of this family are responsible for about 62 deaths each year.

8. Commonly farmed in the US, cattle are the primary or secondary cause of roughly 27 deaths per year.

Cattle are prominent in the US. Many states have cattle ranches and large herds, which puts humans in close proximity to cattle. Individual bulls and cattle are responsible for attacks on their own, though some deaths occur as a result of attacks from multiple cattle. Some of these include being crushed by a cow against a stationary object or blunt force trauma to the chest or head. Cattle are responsible for 27 deaths per year.

9. With venomous species all over the world, snakes are responsible for 100,000 deaths each year.

Snakes are found all over the world. Venomous snakes live in densely populated areas of Africa, Asia, Australia, and some of the Americas, leading them to encounter humans. Antivenoms may be in short supply, which puts humans at risk of fatality from snake bites. Some of the most venomous snakes include the inland taipan (Australia), the black mamba (Africa), and coastal taipan (Australia), though less-venomous snakes can still cause human fatalities. 5.4 million people are estimated to be bitten by snakes each year, and roughly 100,000 people die from snake bites. Another 400,000 people are disabled or disfigured due to snake bite.

10. Though only some species have venom that can kill humans, scorpions are responsible for over 3,000 deaths each year.

Scorpions are found in numerous tropical and subtropical countries, as well as in the deserts of the Americas. Scorpions are often found outside of their natural habitat and in human dwellings, such as containers, boxes, luggage, and shoes, which transport them to non-native areas. Worldwide, scorpions sting around 1.2 million people and cause 3,250 deaths. All scorpions are venomous, but only some species have venom strong enough to harm humans.

11. A carrier of Chagas disease, assassin bugs are responsible for roughly 13,000 deaths each year.

Known as the “kissing bug,” the assassin bug is a blood-feeding insect that preys on humans. These insects carry and transmit the trypanosome protist parasite, which causes Chagas disease, a dangerous disease that can cause congestive heart failure. Roughly 7-8 million people in the Americas are infected with Chagas disease, and nearly 13,000 people die from it each year.

12. Due to the transmission of disease, mosquitoes kill over 700,000 people each year.

Mosquitoes are found all over the world and carry dangerous diseases like malaria, dengue fever, and West Nile virus. Over 80 percent of the global population is at risk of contracting a disease from a mosquito. In total, mosquitoes are responsible for over 700,000 deaths each year.

Frequently Asked Questions About the Most Dangerous Animals in the World

How accurate are fatality statistics?

While it may be widely known that some animals pose a significant threat to humans, such as the box jellyfish, blue-ringed octopus, and inland taipan, these animals aren’t responsible for many deaths each year. They have the venom to kill a human – sometimes multiple humans in one dose – but they live in areas that aren’t frequented by humans. Because of this, their deadliness is more about the potential to kill, not the actual death toll.

How can I avoid deadly animals?

Despite some of these high numbers of fatalities on the list, animal attacks aren’t as common as they may seem. Many of these attacks occur in areas where there’s significant overlap between the human and wildlife populations, leading to greater attack risk. In other situations, such as with cattle ranching, the fatalities are low compared to the amount of time humans spend around these animals. The average person is less likely to be killed by a cow than a cattle rancher.

Still, the best way to avoid deadly animal attacks depends on the animal and the situation. It’s important to consider the risks and native population when you visit a national park, state forest, or other wilderness areas. The same is true for swimming, diving, or snorkeling in marine areas with stinger populations or sharks. Research the wildlife risks before you visit and take appropriate precautions.

For insect-borne illnesses like West Nile and malaria, it can be more challenging. Mosquitoes are found nearly everywhere, meaning that a bite can pose a health risk. Insect repellent and home or office pest-control measures can go a long way in protecting you against insect-borne illnesses. People in rural areas of undeveloped countries are at a greater risk for insect-borne illness or fatality related to diseases (and venom), because of the lack of medical care.

According to the Centers for Disease Control, the top ten causes of death are:

As you can see, even the world’s deadliest animals fall short of the death toll from illnesses on a global scale. Mosquitoes may come close, but they also kill indirectly by causing fatal illnesses.