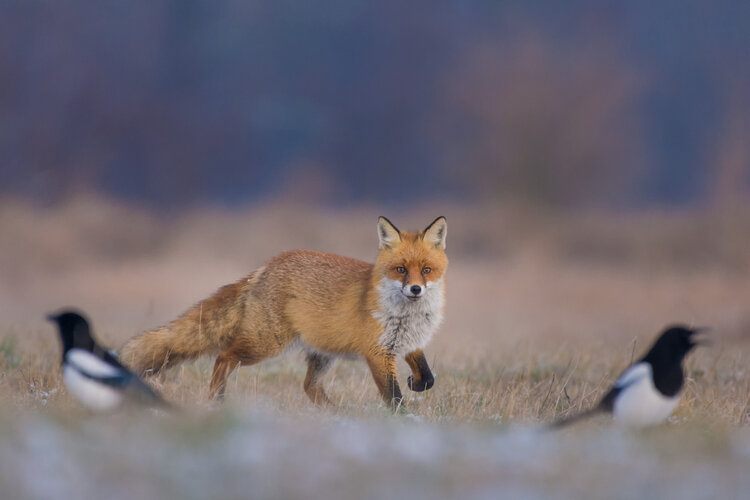 Foxes are deeply entrenched in the lore of many ancient cultures. Some Native American tribes believed that foxes were creator gods; benevolent and wise. Others though associated with fire and the sun. Most people think that foxes are cute, and many feel a natural affinity for these creatures. But how much do you actually know about the fox’s appearance?

Many people associate foxes with dogs, and this isn’t entirely inaccurate. While they’re not closely related, foxes and dogs are part of the same Canidae family. Wolves and coyotes also belong to the same family; they’re all canids.

Canids are opportunistic carnivores. They survive mainly on meat and animal sources of food, but they can also adapt to eat whatever is available in their area. This has allowed members of the Canidae family to thrive in practically every region on earth. In fact, the red fox is the most widespread and common of all carnivores, proving how adaptable and hardy they are.

If you think that a fox looks somewhat similar to a dog, you’re not entirely wrong. They have a similar build to a dog, though slight and long. They lack the musculature that many dogs have. Moreover, foxes have a very pointed face with a long and narrow snout. Their ears are also very pointed, sticking straight up off their head.

There are 37 total fox species and 12 types of “true” foxes. While they all share pretty similar features, they can have drastically different fur colors.

The most prevalent and far-reaching fox is the red fox. Naturally, a red fox has red fur. You can also guess the fur color of other fox species from their name, such as the gray fox. Another common fox with a very different fur color is the arctic fox, which is white so it can better blend in with its snowy surroundings.

In North America, you’ll even find black foxes. They’re actually called silver foxes though because the hairs on their rump are tipped with silver, which really stands out against their black fur.

Once again, the size and stature of foxes vary from species to species, but in general, they’re rather small creatures. Specimens from the largest fox species, the red fox, reach a weight of 15 pounds on average, with a max weight of about 35 pounds. Females tend to be a bit lighter. Other species are also generally lighter than this.

When it comes to body size, foxes are about the size of a large housecat. Measuring just the head and body together without the tail, most foxes around the world average 1.5 – 3 feet in length. But their tales account for nearly one-third of their total length, meaning that some of the largest foxes can be nearly five feet long from nose to the tip of the tail.

Measuring at the shoulders, most foxes are 15 inches or shorter. Some red foxes can reach a height of up to 20 inches. Arctic foxes top out at a height of 12 inches. Fennec foxes are even smaller, maxing out at just eight inches in height.

The life of a wild fox is very difficult. Most will die before they’re a year old. Less than half will reach full maturity. Of those, an even smaller percentage will see the age of five. In general, foxes live for less than six years in the wild.

Life looks very different for a domesticated fox though. In captivity, foxes regularly live for 14-15 years since they have abundant food sources and no enemies.

Though each species of fox has its own unique characteristics, all foxes share similar features. They’ll all have the same trademark face, with an elongated snout and ears. Fur can vary from species to species, as well as size. But in general, they’re small to medium-sized canids that weigh less than 20 pounds.