How Long Do Chickens Live? (Chicken Lifespan in 2021) 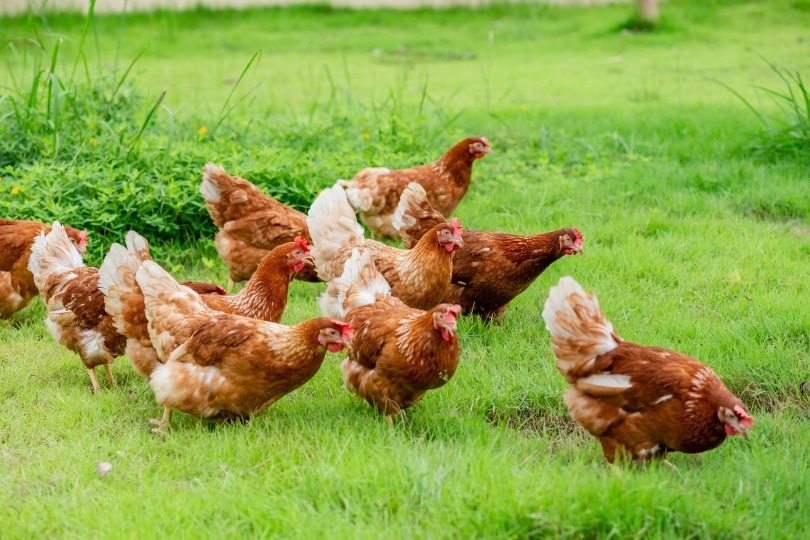 If you’re thinking of raising chickens, it’s natural to have many questions including how long chickens live. Generally speaking, a chicken can live between 5 and 10 years, even though different breeds often have different lifespans. Several factors determine the lifespan of chickens including the threat from predators, the particular breed, diseases, and more.

Below we’ll dig deeper into the various factors determining how long chickens live and lay out the average life expectancy of chickens according to breed.

Factors Affecting the Lifespan of Chickens

Many factors can come into play that can affect the lifespan of chickens including:

The most famous disease affecting chickens was the avian influenza outbreak that occurred in 1983-84. It resulted in the destruction of approximately 17 million chickens as well as turkeys and guinea fowl in the northeastern portion of the country.

The good news is that most diseases and health problems affecting chickens are not deadly. However, the majority of threatening diseases and health issues can result in a decrease in the birds’ overall lifespan. For example, problems like lice and mites can cause feather damage, skin irritation, and anemia which can lower the lifespan of the affected birds.

People who raise chickens should be aware of the fact that chickens living in tight spaces are more likely to suffer from communicable diseases. The aforementioned avian influenza outbreak is one example. This epidemic ended up killing the majority of its victims living in crowded commercial settings.

Diet and nutrition play a role in the lifespan of chickens. Years ago, farmers often fed their chickens leftover human food and whatever else they decided to toss on the ground for their flocks. This haphazard manner of feeding chickens often resulted in chickens becoming weak and ill due to not eating a proper diet.   Nowadays, however, chickens are treated better and given proper feed that meets their dietary requirements.

In the past, chickens were raised for their eggs and occasionally for meat too. It was common years ago to pay no attention whatsoever to a flock’s life expectancy, health, or genetic traits. Chickens were nothing more than animals that produced eggs and sometimes meat for the humans tending to them.

Beginning in the 1800s, people started experimenting with the genetics of chickens to suppress their wild behaviors. This was done primarily to better meet the needs and expectations of the chickens’ human owners. This genetic experimentation resulted in many new breeds of chickens being developed with some enjoying longer lifespans than others.

The particular breed of chickens kept in backyard flocks and commercial settings plays a role in how long the birds live. Some chicken breeds are more intelligent than others and more attentive to their surroundings wherein they won’t wander blindly into danger. This is especially true of some free-range chickens that aren’t confined to coops.

Roosters are male chickens that are generally not afraid to charge toward a threat rather than run away like their female counterparts called hens. Because of this, male chickens have shorter lifespans than their female counterparts. However, when roosters and hens are raised in the exact same conditions with no outside threats present, the males in the flock can enjoy the same lifespan as the females.

Average Lifespan of Chickens by Breed

Now that we’ve covered some of the factors that can affect the lifespan of chickens, let’s take a look at the average lifespan of a few of the most popular chicken breeds. But first, we’ll tell you the difference between heritage chickens and hybrid chickens because it’s important to know.

Heritage chickens are those that have been bred and raised naturally. These chickens lay their eggs naturally too and can cycle their laying throughout a couple of years or even longer.

Hybrid chickens are those that have been selectively bred for specific characteristics. These chickens lay many eggs in a short amount of time then lay fewer and fewer as time goes on. Hybrid chickens don’t live as long as heritage chickens. Now that we’ve covered that, it’s time to move on to the average lifespan of chickens by breed!

Despite their frail appearance, the silly-looking Silkie chickens are quite robust and usually live for 7 to 9 years. The Silkie is named for its fluffy plumage which feels like silk and satin. This heritage breed of chicken is primarily raised for its eggs.

The Rhode Island Red heritage breed is raised for both eggs and meat. These chickens usually live between 8 and 10 years or longer. They do well in most weather conditions and can tolerate being confined to coops and living in a free-range setting.

The beautiful and very popular hybrid Wyandotte chicken enjoys a lifespan of 6 to 12 years. Wyandottes are prized not only for their beauty but also for their exceptional laying ability. Unlike other breeds that typically lay about 100 eggs a year, Wyandottes can lay 200 large brown eggs or more each year.

The Orpington is a heritage breed that enjoys a lifespan between 8 and 10 years. Orpington chickens are kept both for meat and eggs. These beautiful chickens come in many colors including black, blue, buff, and white, and lay light brown eggs.

The life expectancy of Jersey Giant chickens is somewhat shorter than other popular breeds due to their larger size. This hybrid breed has a lifespan of 5 to 6 years. This calm and docile breed was developed in New Jersey in the late 1800s as a dual-purpose bird. So how big is it? The Jersey Giant can grow up to 2 feet tall and weigh up to 20 pounds!

Leghorn chickens have a short lifespan between 4 and 6 years. This is because Leghorns are prolific egg layers that can produce up to 300 eggs a year. This heritage breed is raised for both eggs and meat. The breed’s name is derived from the port city of Livorno in Italy that translates to leghorn in English.

Leghorn chickens are very popular in the United States and there are many color varieties of this breed including white, light brown, buff, black, golden, red, silver, and more.

The hybrid Plymouth Rock breed of chickens has a lifespan of 6 to 8 years but has been known to reach 10 to 12 years. This productive egg layer is a great backyard bird to raise for both eggs and meat. The Plymouth Rock was named for the town of its origin and is one of America’s oldest breeds of chickens.

As you can see, the lifespans of chickens vary from breed to breed. Even though the average lifespan of chickens as a whole is between 5 and 10 years, some breeds live longer than others and vice versa.

If you’re going to raise chickens, it’s important to be aware of each breeds’ average lifespan so you can set your expectations accordingly. It’s just as important to keep in mind the factors that can impact your flock’s longevity. Taking good care of your chickens is a lot of work and a big responsibility but it’s all worth it. A healthy flock tends to live longer than a flock that’s poorly tended to.