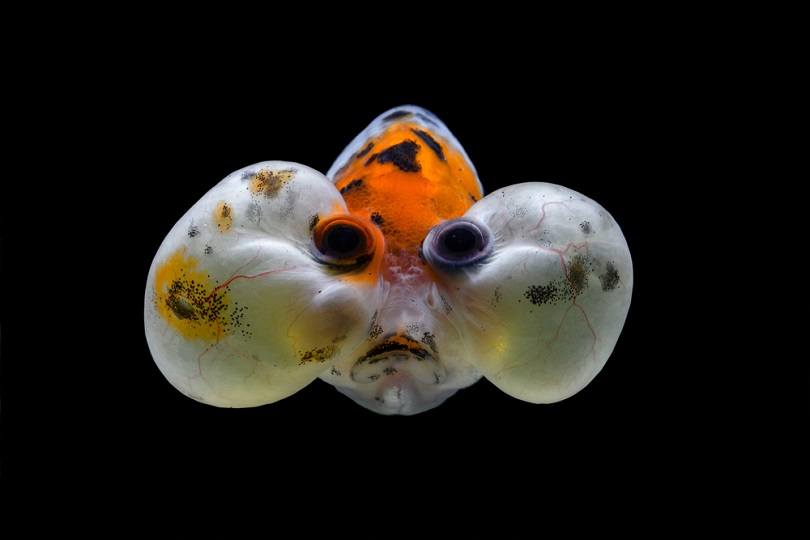 Bubble Eye Goldfish are incredibly recognizable. They have an oversized “bubble” under each of their eyes – hence their name. This striking feature has been bred into the fish over many generations. Their unique appearance has made them increasingly popular for those that want something a little different.

However, these fish are not as easy to keep as some others. Their unique bubble-feature means they require a bit of extra care and handling.

The Bubble Eye Goldfish is a unique Goldfish breed. While they generally look like most other Goldfish, they do have one distinguishing feature – their large “bubbles.” They are a member of the “Fancy Goldfish” family in many ways, though. They act and look similar to most of their family breeds.

You cannot miss their eye bubbles, though. This is the main reason they are becoming increasingly popular. If you want an eye-catching fish, you can hardly beat this one. Their fluid-filled sacs make them a quicky fish for many aquariums.

These fish were first developed in China. They are not “natural” fish. Instead, they were bred exclusively by humans for their unique sacs. They are only captive-bred.

While many Goldfish are relatively easy to take care of, but the Bubble Eye Goldfish is not as comfortable as its cousins. Its sacs make it somewhat more challenging to take care of. It isn’t that it is a needy fish, but you do have to keep some extra things in mind when taking care of it. For example, the sacs can pop, which is the last thing you want.

If you’re a beginner and set on this Goldfish, you can learn to take care of it. You will need to do some extra preparation and plan on spending some extra time taking care of your Goldfish. If you’re willing to jump into the depend, this can be a beginner-friendly fish. With that said, we do not recommend it for beginners who want a flatter learning curve.

How Much Do Bubble Eye Goldfish Cost?

These fish are not expensive in the least. Usually, you can purchase them for only a few dollars from a specialty fish store, which should also have everything else you need for your fish.

However, these fish are a bit difficult to find. They are rarer outside of China, where they were developed and remain immensely popular today.

Fancy colorations or other unique features may drive up the price of the fish.

These fish are usually pretty laidback. They are not aggressive in the least and won’t even attack “prey” animals like snails. They get along with pretty much every peaceful species. Many won’t even fight back when attacked themselves.

For most of the day, these fish just hang around the tank and look for food. They may swim to the bottom to locate dropped food, hide around plant leaves, and just swim about. They are not incredibly energetic and don’t have any exemplary behaviors. They’re pretty standard fish.

The Bubble Eye Goldfish is not going to be darting around their tank. They lack a dorsal fin, which helps every natural breed of fish stay stable in the water. This is a crucial trait that helps fish survive in the wild. This fish is much slower without this vital trait and will have to work extra hard to stay upright. There is some controversy surrounding them for this reason.

These Goldfish have very evident sacs underneath their eyes. This is the distinguishing characteristic that gives them their name.

These sacs are not filled with air, despite how it looks. Instead, they are filled with fluid. As the fish swims, the bubbles will jiggle slightly because of it. This fluid is currently being researched, though we do not clearly understand its use yet.

These sacs vary in size quite a bit. In many individuals, they stay decently manageable. The individual fish may not even seem to notice them. However, they can make swimming difficult. Some breeders have gone with “bigger is better” and bred these fish to have even bigger sacs over the years. This leads to difficulties for the fish and should not be encouraged.

If the sac is popped – and they are quite delicate – they can grow back. The sacs should heal quickly and fill up again on their own. Many owners do not have to do anything to encourage this regrowth. But the broken sac will never grow quite as big as it once was.

These sacs also affect the vision of the fish. They push the eyes upwards, so the fish cannot see where they are going. Practically speaking, they’re pretty much blind. Imagine if you could only look up while walking.

They also have a rather odd “egg-shape.” This balances out their body when paired with their long tailfin, making moving even more difficult.

As you might imagine, there is a lot of controversy because of this fish’s appearance. Many people boycott breeders that produce these fish, as they feel the health problems overrule the sacs’ aesthetic.

These fish can come in practically any color, including gold, orange, red, brown, or white. Some have multiple different colors. Spots are common, as are “koi” patterns.

How to Take Care of Bubble Eye Goldfish

They need at least 10 gallons to thrive, though you should purchase a bigger tank if you can manage it. If you plan on keeping many, you need 10 gallons for each individual.

They are a cold-water species. They do not like warm temperatures, so a heater is typically unnecessary. They enjoy a neutral pH and pristine water. They are sensitive to poor water conditions on top of producing a lot of waste. For this reason, you’ll need to perform partial water changes a lot.

Because of their sacs, no uneven or rough surfaces should be included in their tank. These can “pop” the sac, which can cause infections and other problems. You should use medium-sized gravel on the bottom, and this gravel should be decently smooth. These Goldfish enjoy hanging out at the bottom of the tank, so their sacs will rub up against the bottom.

The tank should only be decorated with silk plants and smooth décor. If it could tear pantyhose, it is too rough.

Live plants are a great option. They oxygenate the water and are not going to be rough in most cases. However, we don’t recommend planting anything too valuable, as these fish will eat them. You should choose hardy plants that can be abused a little.

Filtration is another hiccup these fish face. Their sacs can be sucked up by filter uptake valves, which will damage them and potentially kill the fish. We recommend an under-gravel system so that the fish can’t come in direct contact with the uptake valve.

The Bubble Eye Goldfish is an excellent tankmate. They are incredibly laidback and peaceful. They will not harm other fish in the large majority of cases. However, their sacs are susceptible to damage, and they cannot swim well enough to escape from danger. For this reason, you have to put them with very peaceful fish.

We generally recommend keeping them with only their species. Some other species of very peaceful Goldfish may also work.

What to Feed Your Bubble Eye Goldfish

These Goldfish will eat just about anything. They do great with high-quality flakes. Typically, as they search the floor for food, they do best with something that sinks. They are known for taking in the air when they eat floating flakes, which can be dangerous.

They can eat daphnia, bloodworms, and brine shrimp as a snack. They do well with these extra bits of protein thrown in, but it should not be their only nutrition source.

Because they are not powerful swimmers, they do not gobble up food like other fish. You have to give them a bit longer to eat than you would otherwise. If they are housed with faster fish, you may need to separate them for feeding.

These fish are prone to a few different diseases. Like many freshwater fish, they are prone to Ich, Dropsy, Swim Bladder Disease, Skin Flukes, and other parasites and diseases.

If you provide your fish with the right environment and clean their tank, many of these issues are avoidable. Usually, only fish that are stressed out in some other way get sick. Keep your fish healthy, and you shouldn’t have anything to worry about.

Their sacs are very delicate and can break easily. When this happens, they may be at an increased risk for infections. This can be serious. Prevention is the best medicine in this case.

Breeding Bubble Eye Goldfish is not difficult at all. They are eager to breed whenever the correct conditions present themselves. You can also breed them in large groups, so you don’t always need to distinguish between sexes.

These fish will eat their eggs, though. You will need to separate them into a different tank for this reason. The fry-raising tank will need to be equipped with things for the eggs to stick to.

The fish determine when it is time to mate based on temperature. You can change the temperature of the tank to make them go into breeding mode. This is done by slowly bringing up the temperature each day until your tank is at 74 degrees. You may have to lower it first to make the difference obvious enough to the fish.

Are Bubble Eye Goldfish Suitable for Your Aquarium?

These fish are somewhat easy to take care of as long as you set up your aquarium appropriately. They require a particular set up to ensure that their sacs are not busted, putting them at a higher risk for bacterial infections. They don’t do well with many other fish because of this.

However, they are incredibly peaceful and get along fine with other extremely peaceful fish. They don’t require a problematic diet and breed relatively easily.

Because their unique features make it somewhat difficult for them to swim, there is some controversy surrounding their breeding. They are not “natural” fish in the least.