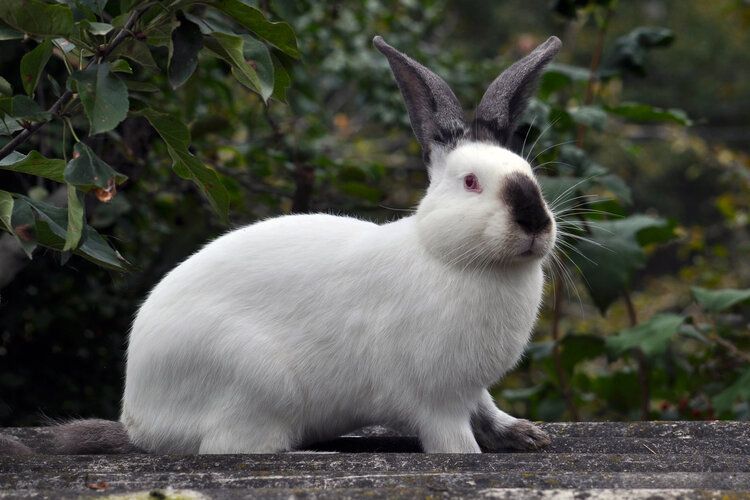 Of all the rabbits whose names are not actually where they come from – the New Zealand, Himalayan, and Polish rabbit come to mind – finally we get to one who is named after its home! A genuine California rabbit breed, the Californian was originally bred as a fur and meat producing rabbit in the early 1920s U.S.

Since that time, it has become revered as an excellent house pet, and even occasional show rabbit. No matter what its breeder’s original intention was, one thing is for certain: The Californian’s popularity today is due in large part to their easy-going, friendly natures.

In this article, we’ll be covering the history and origin of the Californian rabbit breed, as well as providing you with helpful tips and hints for if you’re considering bringing one into your home.

History and Origin of the Californian Rabbit Breed

Lynnwood, California played home to the very first Californian breed rabbits in 1923. George S. West, a long time New Zealand rabbit breeder, had set out to develop a rabbit that wouldn’t display the “wooly” characteristic that was so common in his New Zealand White litters.

Because rabbit fur was so often used in the production of felt hats at this time, these wooly rabbits wouldn’t command the same price at market as their flat-haired brethren. By experimenting with Himalayan and Standard Chinchilla rabbits, West eventually developed the rabbit he was looking for: The Californian.

Recognize by the American Rabbit Breeders Association as early as 1939, the Californian became a popular option not just for meat and fur, but also as a pet and show animal. Its adoption across the United States ensures its place as a well-respected breed to this very day.

Though more than twice the size of the diminutive Himalayan, the Californian displays its same characteristic markings: An all-white coat, but with dark markings on the nose, feet, ears, and tail.

Because of their original intention as meat and fur rabbits, Californians are stocky and plump, with plush and dense fur. They’re uncommonly well-muscled, and quite strong even amongst breeds of this size.

A hardy and adaptable breed, the Californian requires little more than ample timothy hay and filtered water to stay in great health. Combine this with a routine of daily exercise, as well as servings of kibble and dark, leafy greens, and your Californian will enjoy excellent physical health for years to come.

With their dense, plush coats, Californians may require slightly more brushing than many other domesticated breeds; expect to brush them twice per week to keep their coat in optimal condition. During their spring shedding season, you’ll want to increase these brushings to three times per week or more.

Kind, gentle, and easy-going, the Californian is a steady friend to both humans and other animals. They make excellent house pets, though it’s worth noting that they also love spending time outdoors. To help support their best health and friendliest attitude, make sure that they get time at least once per day to run around and explore, even if this is just inside of your house.

Oftentimes, rabbit breeds which were originally intended as meat and fur animals end up being some of the kindest, most loving pets imaginable; the Californian is no exception. With their distinctive colorings and sweet temperaments, we can highly recommend them as pets for just about anyone.

Interested in exploring more about the Californian and other rabbit breeds? We recommend reading Lynn M. Stone’s Rabbit Breeds: The Pocket Guide to 49 Essential Breeds, and Bob D. Whitman’s Domestic Rabbits and Their Histories. Both are exceptional sources of rabbit lore and information that we draw on heavily for our breed info articles here on Rabbitspot.