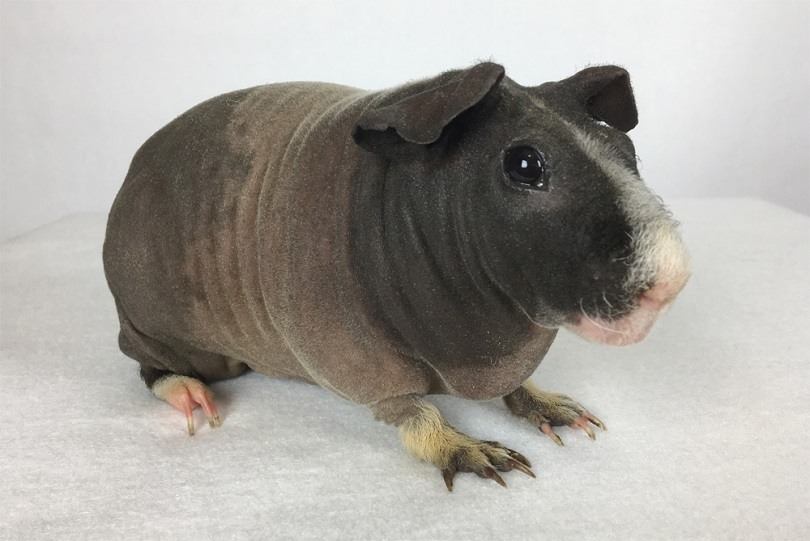 When you picture a guinea pig, you likely think about their chubby bodies, their adorable noses, and their thick, lustrous coats.

Now, try to imagine a guinea pig that has all of that — but not the thick, lustrous coat.

Congratulations, you’ve just pictured a Skinny Pig, which is what many people call hairless guinea pigs. These are just like regular guinea pigs, except they have very little hair (and sometimes, none at all).

While not as common as their hairy cousins, Skinny Pigs are growing in popularity. If you’d like to learn more about these adorable little rodents, read on.

There’s very little that makes Skinny Pigs different from regular guinea pigs. They need most of the same care, including the same diet and lifestyle needs.

It’s believed that these hairless pigs resulted from a spontaneous genetic mutation in 1978, but by the early 1980s, they were being bred specifically for their hairlessness. In addition to being wonderful pets, their lack of fur makes them ideal for lab use, especially in dermatological studies. The reason that they’re used in such studies is that their skin is similar to that of humans.

Skinny Pigs are legitimately adorable and every bit as fun to look at as regular guinea pigs are.

Not every Skinny Pig is hairless, though. Some have bits of fur on their muzzles, feet, legs, or back, but they all generally have more bare skin than not. Those that have more hair than you’d expect from a Skinny Pig are called “werewolves,” which is about the most awesome thing that we can think of.

How Much Do Skinny Pigs Cost?

Skinny Pigs used to be the unwanted guest at the family reunion when it came to guinea pigs. However, in recent years, they’ve become quite the trendy pet, and as a result, the average cost of one of these animals has been climbing.

Generally speaking, you can expect to pay anywhere from $100 to $200 for a Skinny Pig, although that number could rise if you want a special color. Also, remember that these are social animals, so you’ll likely need to buy at least two of them (although they’ll get along just fine with a regular guinea pig as well, if you’re looking to keep costs down).

Like all guinea pigs, Skinny Pigs are social and outgoing. They love being around friends, whether other guinea pigs or their owners. They are usually quite vocal when with their pals, and you’ll often hear them chattering loudly.

They’re less confrontational and aggressive than regular guinea pigs, so you shouldn’t have too many territorial disputes on your hands. They prefer to shy away from conflict rather than face it head-on.

They enjoy affection and being taken out of their cage, but be careful, as they can be quite delicate.

A Skinny Pig’s body is largely like that of any other guinea pig. It’s only the hair that’s different. Skinny Pigs usually aren’t completely bald but have little bits of peach fuzz on certain parts of their body.

Skinny Pigs all have large patches of bald skin, which makes them more susceptible to damage from the sun and makes it harder for them to regulate their temperature. They’re susceptible to having dry skin and are prone to contracting mites.

These critters come in a variety of colors and patterns, including brindle, Himalayan, and Dutch.

The most common colors are:

Like all guinea pigs, Skinny Pigs have short, stout legs that make them accomplished diggers. They also have long whiskers that allow them to feel the area around their head and a strong sense of smell, which compensates for their poor eyesight.

How to Take Care of a Skinny Pig

Each Skinny Pig needs at least 7.5 square feet of tank space, but since you’ll likely need to keep several at a time, you’ll want a tank that’s quite a bit larger than that. They enjoy going up and down different levels, but they enjoy exploring horizontal space even more, so try to have a tank that’s at least as wide as it is tall.

You can mitigate the need for horizontal space by taking them out of their enclosure and letting them run around. They’ll also need plenty of toys for enrichment.

Keep in mind that the more room that your rodent has, the better they’ll be able to separate their bathroom area from the rest of the tank. Besides being healthier for your pet, it also makes their cage easier to clean.

Skinny Pigs should have plenty of substrate lining the bottom of their cages so they can dig down when they get cold. Aim for paper shavings or similar products, as cedar and pine contain chemicals that can harm your pet if ingested. Even if your critter doesn’t eat them, the fumes can be harmful to their respiratory system.

Since Skinny Pigs don’t have any fur (or at least not much of it), they have trouble regulating their internal temperature. Their cage needs to be kept between 65° and 75°F; they should also be kept away from anything that would influence their core temperature, like vents, fireplaces, and direct sunlight.

Skinny Pigs don’t have any special lighting needs. They’re not nocturnal, so they should be kept in a location where they can see the sun rise and set naturally. You don’t need to artificially manipulate their light exposure, however.

Do Skinny Pig Get Along With Other Pets?

Skinny Pigs do well with other guinea pigs; in fact, they thrive on the company. You should make sure they have at least one other pig with them to keep them company unless you plan to spend a ton of time with them on a regular basis.

As far as other pets are concerned, it’s generally not your Skinny Pig that you need to worry about. Dogs and cats may prey on them, so you shouldn’t let larger pets near them. Anything smaller is something of a crapshoot, but we’d recommend only pairing them with other guinea pigs.

What to Feed Your Skinny Pig

Your Skinny Pig’s diet should consist primarily of hay, either Timothy or some other low-fiber variety. Not only does this have all the nutrition that they need, but gnawing on the hay also helps file down their teeth. If they don’t have something like hay to chew on, their teeth will continually keep growing, causing all sorts of dental issues.

You can also give them pellets made of Timothy hay; these can be found in most pet stores. They also need a source of vitamin C, so offer them bell pepper, tomato, asparagus, and other veggies.

They like other vegetables too, including leafy greens, cauliflower, carrots, and squash, and fruit, including pears, kiwi, oranges, and apples. Just don’t feed them fruits too often, as they’re high in sugar and can cause diabetes and other weight-related issues.

Skinny Pigs’ metabolisms have to work harder than those of other guinea pigs to keep their core temperature up, so you’ll need to feed them more as a result. Just don’t overdo it, as obesity is terrible for these animals.

Besides skin-related care, there’s not much that Skinny Pigs need that’s unique to them. Like all guinea pigs, they need their cages to be kept clean, with the bedding changed daily if possible.

They don’t need much, if any, bathing, and in fact, bathing them too frequently can dry out their skin. If their skin does become dry, you can use a tiny bit of natural moisturizer, like coconut oil, on it, but never use any lotions designed for humans.

You’ll need to clip or file their nails occasionally, as their lack of hair can make them more prone to scratching their skin if their nails get too long.

Breeding a Skinny Pig is a bit more difficult than breeding regular guinea pigs, as they tend to be larger at birth. They also have larger litters, so the births are more likely to suffer complications. The first pregnancy is usually the hardest, but they’re all a bit touch-and-go.

In fact, some experts estimate that 20% of female guinea pigs won’t survive the pregnancy and birthing process. Those same experts often recommend leaving the breeding process to those with experience, as doing it yourself can put your Skinny Pig in serious danger.

If you do decide to breed your Skinny Pig, be sure to separate the boar and sow immediately after birth. These animals can create another pregnancy within hours of giving birth, but doing so is extremely bad for their health.

Are Skinny Pigs Suitable for You?

If you love guinea pigs but want one with a little bit of a twist, consider adopting a Skinny Pig. They’re every bit as adorable and loving as regular guinea pigs, but their mostly bald appearance helps them stand out in a sea of furry pets.

You’ll have to pay more to buy one, though, as they’re harder to breed and quite trendy to own at the moment. They also require more care, as they’re less able to regulate their body temperature and are prone to a few more health problems.

If you’re willing to pay the price, though, you’ll have a wonderful, outgoing pet that will never fail to put a smile on your face.