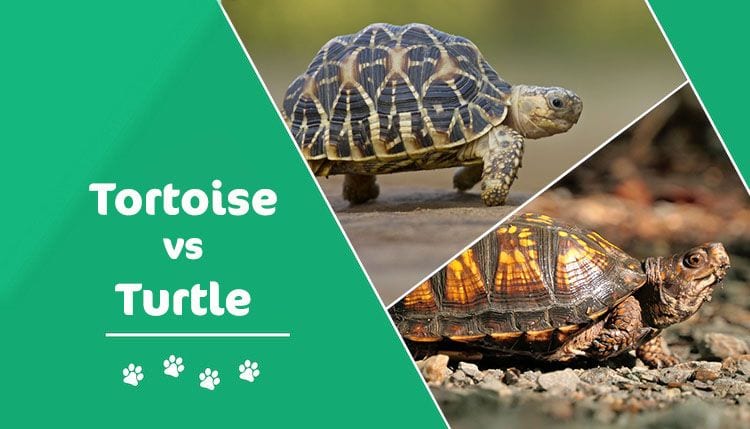 Many people use the terms “turtle” and “tortoise” interchangeably, and it’s an honest mistake to make. There are indeed clear differences between the two animals, and once you’ve become aware of them, it’s difficult to un-see them.

One thing to keep in mind before we get started, though: All tortoises are turtles, but all turtles are not tortoises. Tortoises have a few key features that clearly separate them from other turtles.

Turtles may seem like one of the easiest pets to own, and they can certainly be low maintenance. However, there’s plenty that you need to know about owning one of these adorable reptiles.

There are many different types of turtles in the world, from tiny Mississippi Mud Turtles to giant sea turtles. However, the most commonly owned species as pets are box turtles and red-eared sliders.

As a result, most of what follows will center on those two species, as there are over 350 individual turtle species in all. That’s far too many to cover in this article!

Turtles don’t have personalities in the same way that dogs and cats might, but that doesn’t mean they don’t have any personality whatsoever.

A turtle’s personality is generally defined by two traits: aggressiveness and curiosity. Many turtles will withdraw into their shells at the first sign of trouble, but others will take a more spirited stance, choosing instead to fight back in whatever way they can (usually by biting).

The safer you can make your turtle feel around you, the less aggressive they’re likely to be. However, you won’t be able to change them too much, so it’s worth trying to find one that’s not overly aggressive before bringing it home.

If you have an especially curious turtle, they’ll be more likely to interact with both you and their surroundings. These turtles aren’t likely to withdraw into their shell or snap at you, making them ideal for pets.

Remember, though, that every turtle has its limits, and if you mistreat them, they’ll likely become more withdrawn and more aggressive. Sadly, it’s much easier to change their natural personality for the worse than for the better in this regard.

Turtles are omnivores, so you’ll need to provide them with both meat and plants. However, they tend to eat more meat while they are young before transitioning to a more plant-heavy diet later in life.

They love snails, but make sure that the snails you bring home are pesticide-free, as turtles are sensitive to chemicals. They’ll also eat worms, crickets, and slugs, so you can drop a few of each in your turtle’s habitat.

You may also want to throw a few salamanders or de-clawed crayfish into your turtle’s water, or you can just give them bits of cooked meat. Usually, though, you can just drop a few feeder fish in there with them. Box turtles especially enjoy aquatic food, and they tend to eat more meat later in life than other species.

As for plants, turtles enjoy apples, leafy green vegetables, dandelion leaves, and tomatoes. You can cut these up and drop them in their aquarium, or they may even eat them out of your hand once trust has been built up.

Most pet stores sell pellets and food sticks that contain all the vitamins and minerals that turtles need to stay healthy, so it’s a good idea to supplement your pet’s diet with them. Feed young turtles twice a day, and once they’re fully mature, you can drop down to feeding them once every other day.

Your biggest challenge with owning a turtle will be keeping their habitat clean. Turtles aren’t the neatest eaters, so you may have to clean up some disgusting messes (and that’s only taking into account what they’ve eaten — not what comes out the other end).

You’ll need to keep their water as clean as possible. This involves both installing a filter as well as changing it regularly, and you’ll also need to make sure any plants or decorations are mold-free.

Surprisingly enough, turtles need a fair amount of exercise. This means giving them a tank big enough that they can swim around freely, and plenty of things to climb on when they feel like it.

Depending on the turtle, you may want to let your turtle out of their habitat to wander around. This gives them some good exercise as well as exposing them to new situations, but you need to be careful that they don’t get stepped on while they’re out and about.

Turtles can fit in with any type of household, but they’re especially good for those who want a pet without also taking on tons of responsibility. They can be good starter pets for kids, but you’ll still need to supervise them closely, as turtles need plenty of care that very young ones may not be capable of providing.

Owning a tortoise is much like owning a turtle, but it tends to be much easier, since you won’t have to deal with the challenges of maintaining a water-filled aquarium.

As with turtles, a variety of them are kept as pets. Common breeds include Russian, red-footed, Greek, and radiated.

In many cases, tortoises have more distinct personalities than do turtles, or at least, it will seem that way, as you’ll be in closer contact with a tortoise than you would a turtle.

They tend to be sweet, gentle animals, and they are capable of both giving and accepting affection.

However, they can also be quite aggressive, especially around members of the same sex. They’re also as prone to hiding from danger, so the personality that you encounter will depend in large part on the environment that you create.

Not all tortoises are omnivorous, but even those that are will eat less meat than their turtle counterparts. For the most part, they eat a plant-heavy diet.

You’ll want to give them leafy green vegetables, such as kale or baby leaf mixtures. They’ll also appreciate a little bit of fruit, but this should be given sparingly rather than making up the bulk of their diet.

You may also want to provide succulents like prickly pear cactus. In addition to being nutritious, these are excellent sources of moisture for your pet.

If you’re going to feed your tortoise meat, you can give them earthworms, cooked chicken, fish, or even high-protein dog food.

One of the most important things to understand about tortoises is that they’re cold-blooded, so they’ll need help regulating their body temperature. You’ll need to keep their habitat at a healthy temperature, and you may want to provide a heat rock or another heat source as well.

Keeping them hydrated is equally important. Many tortoises have adapted to desert climates, and they may not drink much, if at all. As a result, it’s essential to give them foods that are packed with moisture. Prickly pear is a great choice, but fruits and veggies are good too. You’ll still need to provide clean water, of course.

They need plenty of sunlight — but not too much. You should try to give them access to natural light, but be sure that they can get away from it once they start getting overheated.

Try to limit the stress that they get put under as well. This means not handling them unless necessary, and limiting the loud noises and vibrations that they’re exposed to.

Tortoises are great for anyone who wants a lovable, low-maintenance pet. They require even less care than turtles, as you won’t have to deal with a bunch of water, and they can be more people-friendly. Smaller tortoises are perfect for apartment dwellers, whereas larger species can make fantastic outdoor pets.

What Are the Differences Between Turtles and Tortoises?

If you want to be able to readily identify a turtle or a tortoise at a glance, there are a few key things to look for.

Their habitat is one sure giveaway. Turtles are aquatic or semi-aquatic animals, so they’ll need plenty of water. Tortoises are land-based. If the creature isn’t swimming, it’s probably a tortoise.

Tortoises also tend to have rounded shells, whereas turtles have flatter, more streamlined shells. This is to help them swim faster in water (and turtles can swim surprisingly fast).

Their legs are also different. Tortoises have powerful, club-like legs. This is to help them move around and shoulder their weight, whereas turtles have flipper-like legs (the better to swim with, of course).

Which Animal Is Right for You?

If you want a fun pet that’s easy to take care of, you can’t go wrong with either a turtle or a tortoise. However, tortoises are even more low-maintenance than turtles, although they can require more space if you get a larger species.

One thing to keep in mind regardless of which one you adopt, though, is the fact that both of these animals have incredibly long lifespans. This is a pet that you’ll have for quite some time, so be sure you’re in it for the long haul.

Ultimately, it’s essentially a question of whether you want to put up with the demands of maintaining a water-filled aquarium or not. Either way, you should have a pet that’s interesting, unique, and best of all, easy to catch if they run away.