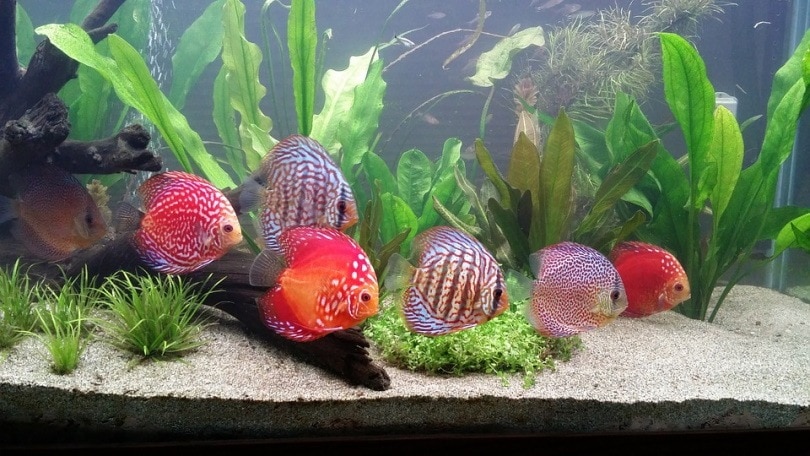 Discus fish are peaceful and exceptionally pleasing to look at in an aquarium. Their color variations and calm temperament are desired by many aquarium hobbyists. They generally are not good for beginner or even intermediate fish keepers, as they are overly sensitive to environmental changes and are not hardy enough to survive most beginner mistakes, so it is a great pride to be able to successfully keep freshwater discus fish. They come in a variety of color variations, mostly captive bred.

Red discuss fish also known as the Heckel discus, is a type of chilid. They are rounder than other discuss and display lines across their bodies, eyes, and caudal fin. They display a brilliant and vibrant red coloration, although some are commonly mixed with a bit of white by the head or ends of the fins and a few captive bred color mixes, mostly white, black and a faint red. They have a thick band in the middle of their bodies, followed by thinner and fainter bands on their bodies.

This is a relatively new coloring, displaying an eye-catching blue coloration. They come in a variety of vibrant blue colors, some commonly mixed with white or black patterned lines. Most of the shades of blue are classified as cobalt or royal blue on these discuss fish. They also come in light shades of brown mixed with blue or white. Some also display a red and blue coloration.

These are a strikingly green color, some appearing a mix between light blue and green and some a swampy almost luminous green. They can also be seen mixed with white and black patterned lines. Some commonly display a yellow and green pattern, with a thick dark green line over their eyes and vertically across their bodies.

The brown discus is a subspecies of the green discus and have a brown and green hue as well as sometimes a yellow and brown color. They have almost transparent pectoral fins and display thin pelvic fins.

This is a brand-new breed of discuss. Heckel cross discus display an orange and blue pattern. The head is a deep orange, the ends of the fins and tails are tinged with yellow and is mixed with white dots. A dark blue or black band runs vertically down the middle as well as on the base of their tails.

They display a blueish white color, with either red or orange eyes. Black lines can be seen on their face as well as yellow tints on the head and ends of fins. They are absolutely striking in an aquarium amongst other patterned discus, although they are plain, their white adds a welcomed dash of color.

They are a solid grey color, they are not the most striking in an aquarium, but there is definitely some interest in them. The edges of their fins are transparent.

They are a mix of yellow and gold, they have light red markings around the pupils and have transparent fins. They almost resemble a fresh mango coloration.

A creamy white coloring with opal fins. They display red eyes and sometimes the white mixes in with a faint coloration of yellow or pink, but very lightly.

They display translucent fin edges, and their red and yellow coloration blends in with their eyes, making them almost indistinguishable.

They have a strong blue color, the white undertones make the blue appear to ‘glow’. They have red eyes, translucent fins and dark red and brown faded in at the base of the fins.

The body is an opal white throughout their body and fins, showing a faint undertone of pink. They have red eyes and a blue green color on their heads.

A vibrant light blue color, they have celestial looking scales and a transparent tail. Their eyes are red and yellow can commonly be seen on the head. They make a fantastic color addition to aquariums.

They have translucent fin edges as well as an orange and yellow face. Their primary color is a deep red that covers most of their body. The rich and vibrant red is quite eye catching.

This is a discus coloration mix between yellow and white, although the yellow is more dominant. The eyes are red or yellow and the tail and fin edges are transparent, with the head being a white hue with faint yellow coloration.

They display a blue tail, dark red fins and a body that fades into a vibrant orange and yellow color. Their eyes are red, and the head is a dark yellow/mustard color.

Red color discus are one of the most interesting looking type of discus. They have a deep red body with transparent fins and tail towards the ends. The face is a light yellow mixed with white and they show a dark band vertically over their eyes.

Solid blue discus have red eyes and a light blue face. They display some white undertones and have a dark grey and blue tail. The caudal fins fade into a darker blue the same color as the head.

Possibly one of the most sought out discus in the aquarium community. Tiger Turkish discus display a light vibrant blue with red tinged fins and tail, they have a unique and intricate pattern design, a mix of squiggles, dots, and lines.

The main coloring is a metallic blue, they have red eyes and dark blue bands vertically on their bodies. The fins and tails are a mixture of red, dark blue and metallic blues.

An ocean blue coloring covers their bodies. The head is a luminous green and yellow color and they have red patterns covering their bodies. the eyes are ringed with red and ocean blue.

An astonishing pattern of red rounded squiggles cover the body, the inside of the red squiggles. They have light blue streaks through their fins and tails and have a pattern of white and orange on their heads.

Rot Turkish discus have a rounder body than other types of discus. They have multiple-colored bodies which has red and blue patterns, orange tail and fins as well as a white and orange patterned head. They eyes are a black with the pupils barely distinguishable.

A red and white patterned head is displayed, the tail is yellow and has a faint dark band by the base. The primary turquoise color is dotted with dark red.

Leopard spotted discus fish have striking thick dark bands vertically on their light blue body, they are covered with red patterns. A dark band crosses over their red and blue eyes.

A contrasting and intricate red and white pattern is displayed on this discus, the pattern gets more entangled lower on the body. The eyes are a dark yellow and the tips of the fins and tail is transparent.

Tiny patterns are displayed, a mixture of blue and red almost appearing to be dots. The tail is a light blue with tiny unruly white dots that appear transparent. Their eyes are dark black with a ring of light blue.

White leopard discus are quite appealing to the eye. They display a white and blue head with red and dark yellow eyes. The rest of the body such as the tail and parts of the fins are covered in a deep dark red color.

This fish has an orange head and very dark red eyes. The tail is a transparent white and the bodies coloration is mainly made up of thick red and blue striations on the body, including the fins but not the tail.

Albino leopard discus have a patterned orange head with dark eyes surrounded by a deep orange ring. The body is made up of a white and blue hue undertone with red dots and patterns.

The tail is transparent, and the eyes are red, the body has an undertone of whitish-blue and the head is a solid orange color towards their mouth. The patterns are made up of red dotting and squiggles.

We have now established that discus fish come in a bunch of interesting colorations and varieties, some displaying intricate patterns and mixed colorations. They make a peaceful and colorful addition to most freshwater tropical aquariums.

Learn more about fish types with one of these interesting guides: