Can Chinchillas Eat Apples? What You Need to Know! 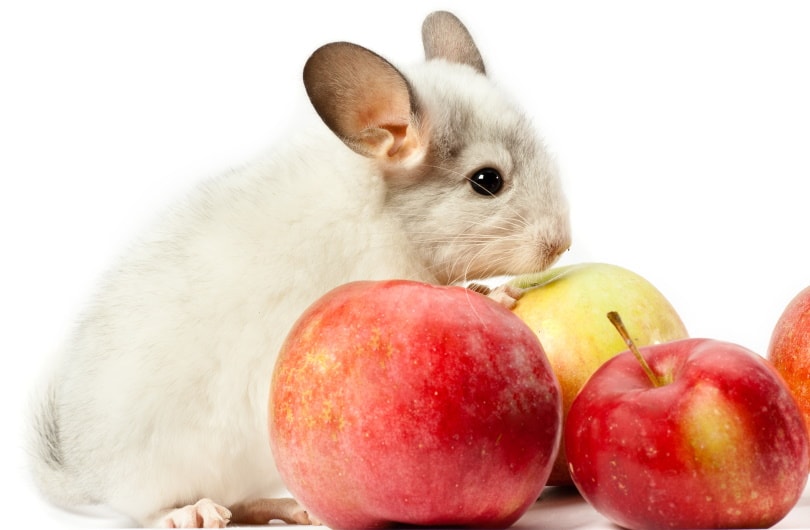 Chinchillas need a variety of fresh foods in their diet to thrive. However, fruits should only be given as a treat because they are quite high in sugar. They are healthy for us, but they aren’t the best option for our furry friends.

Apples aren’t incredibly high in sugar but Chinchillas are extremely small. Therefore, even a small amount of added sugar is a large amount to them.

Instead, chinchillas require a diet that is high in fiber. In captivity, they are often fed hay of some sort, such as timothy hay or similar low-calcium hay. High-calcium hays can cause bladder stones, as this species can’t digest a high level of calcium.

Since you must determine exactly how much apple to give your chinchilla, if any at all, you must understand their overall diet.

What Should Chinchillas Eat?

Chinchillas should eat most hay. Most types of hay are a good option for them, including timothy hay, oat hay, and meadow hay. This grass should be provided as a 24/7 option for your chinchilla. They should be able to eat as much of it as they want.

You should avoid high-calcium hays like alfalfa. These can often potentially cause kidney and bladder problems because a chinchilla’s system is not designed to withstand high amounts of calcium.

Furthermore, chinchillas should be fed a decent amount of fortified pellets each day. These should be made for chinchillas specifically and provide all the nutritional deficiencies that your chinchilla may have.

You should not make sudden changes to your chinchilla’s diet, however. They are known for having extremely sensitive digestive tracts. Therefore, sudden changes can cause digestive upset, which can become quite serious in some cases.

Apples do not have any place in the bulk of a chinchilla’s diet. They are not hay nor fortified pellets, which are the two substances that your chinchilla should be eating the most of.

That said, apples can be a solid treat option. You should not provide them with that much apple, as you don’t want them filling up on apples instead of hay or pellets. However, a small amount from time to time likely won’t hurt your pet.

You can also feed them a variety of other treats, such as other high-fiber fruits and low-calcium greens.

Chinchillas do not need apples, though. In fact, they don’t need any treats at all. Many owners feel the need to provide them with a bit of meal variety, though, and a few treats can provide that.

Chinchillas can eat apple skins without a problem. It doesn’t pose a choking risk because Chinchillas have efficient teeth. The peel is also quite yummy for many chinchillas and provides a significant amount of fiber.

Preferably, the apple should not be particularly sweet or sour. Otherwise, your chinchilla may not like it, or the apple may be a bit too high in sugar. You want plain apples where possible.

How Much Apple Can a Chinchilla Eat?

You should not provide your chinchilla with that much apple — ideally, two small apple pieces a week. Otherwise, they may develop problems with their digestive tract.

The acidity of the apple combined with the sweetness often leads to digest complaints. Since chinchillas are so sensitive, even a moderate amount of apple can cause significant issues.

We only recommend providing your chinchilla with an apple slice or so a week. This may seem like an incredibly small amount, but it isn’t wise to increase this. Some chinchillas may not even be able to withstand that much apple.

Your chinchilla may not tolerate any apples due to an overly sensitive digestive system. Most chinchillas have some sort of digestive problem, so this isn’t as rare as you might think. Be sure to monitor your chinchilla’s wellbeing after feeding them an apple piece. If they show digestive symptoms, you may not want to provide them with any more apples.

Their digestive systems can also change over time. Therefore, your chinchilla may handle apples during the first part of their life, only to develop a problem later. Don’t assume that your chinchilla isn’t sensitive to apples just because they ate them once and were fine.

How Often Can Chinchillas Have Apples?

Preferably, it is best to spread out any apple that your chinchilla eats throughout the week. You don’t want them to consume it all at once because this may cause digestive problems. It is almost always best to provide them with small amounts spread over a longer period.

You may feed them a slice of apple one day and then another a few days later.

There is not a specific time period that you should wait before feeding apples to your chinchilla again, but you should preferably spread it out. Don’t feed them apples 2 days in a row, for instance.

What Other Fruits Can a Chinchilla Eat?

Chinchillas do best on high-fiber fruits, such as strawberries, pears, and bananas. You should avoid fruits that are mostly water, like watermelon. These can cause significant digestive upset because your pet may be unable to handle the excess water content.

There are a few rules that you should follow when offering any fruit, including apples.

You should always chop the fruit up into small pieces. Large pieces of apples and other fruits can potentially be choking hazards.

Furthermore, don’t let pieces sit in your chinchilla’s cage past their obvious freshness. You don’t want your chinchilla to eat rotting apples or any other fruits. Due to their sensitive digestive system, this can quickly cause serious problems.

You should not feed your chinchilla any fruits if they are unwell for any reason. The high sugar content will make them worse, not better. Instead, it is best to keep them on their diet of hay and pellets. Only feed them treats when they are feeling better.

Chinchillas should not consume large amounts of apples. If they do, it may cause digestive upset. Over time, it can lead to nutritional problems. If your chinchilla is consuming too much apple and not eating hay or pellets, they will develop dietary issues.

At most, you should only feed your chinchilla an apple slice or two spread throughout the week. While this may seem like a small amount, your chinchilla is extremely small, so it’s actually a rather large amount for them.

Apple isn’t particularly nutritious for chinchillas, but they do often find them tasty. Therefore, apples may make suitable treats, but that’s about it. Apples don’t have a place in a chinchilla’s main diet.