How Many Babies Do Hamsters Have In A Litter? Breeding & Reproduction Guide 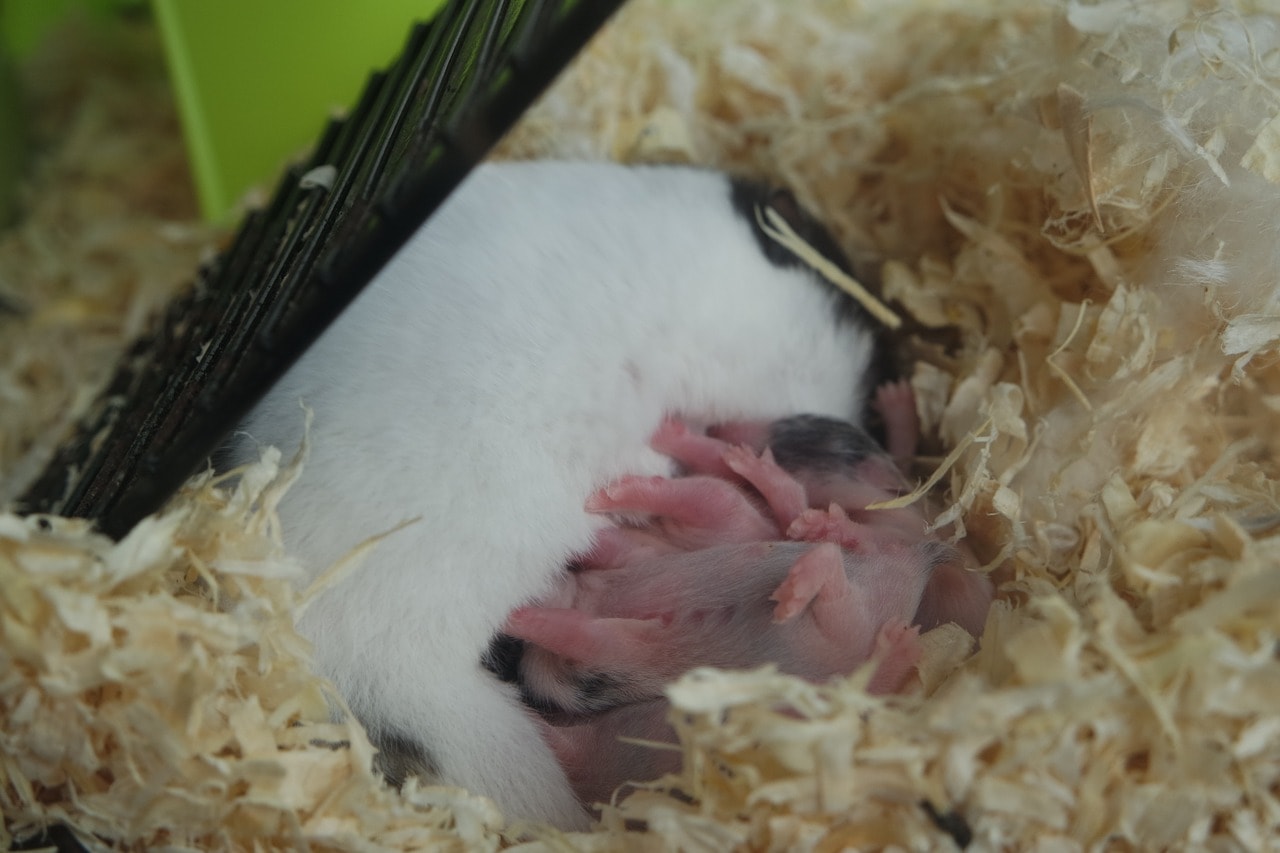 If you have a pregnant hamster or are thinking about breeding hamsters, you probably have many questions, and the biggest one is how many baby hamsters your pet will have in a litter. The short answer is that you can expect an average of four pups in a hamster litter, but keep reading while we look at these interesting animals to see if we can get you a more precise number to help you get better prepared to manage and rehome them.

How Large Is a Hamster Litter?

Hamsters typically have 4–6 pups per litter, but the number can often go up to 12, with rare hamsters seeing litter sizes as large as 20. The number of offspring can also fall if the mother decides to stop raising them or eats them.

The type of hamster has the biggest impact on the number of offspring you can expect.

As you can see from the chart above, the Roborovski, Djungarian, and Chinese hamsters can all produce tiny litters of one or two offspring, but the number is much more frequently closer to six.

It’s important to maintain a stress-free and quiet environment for your hamster mom during the first week or so after she gives birth. Separating her from other animals might also be a good idea. If she is upset or disturbed during this sensitive time might accidentally cannibalize her young. History shows the mother hamster is prone to putting her children in her cheek pouches when eating while stressed out, which can suffocate them.

How Can I Tell If My Hamster Is Pregnant?

As you might suspect, you will usually notice your hamster getting larger than normal with a slight bulge in her abdomen. You can also expect the hamster to become restless, and she might be more active than normal at unusual times of the day. You may also notice some bleeding in the vaginal area when the birth is close.

How Can I Prepare My Hamster for Birth?

The first thing we recommend you do upon learning your hamster might be pregnant is to take it to the vet to have it looked over. After a prenatal checkup, the doctor can help give you advice that pertains directly to your pet, and they might prescribe vitamins or other supplements to ensure a healthy delivery.

One of the first things you will want to do at home is put extra bedding into the cage. Bedding is not expensive, and it will help make your pet more comfortable for the roughly 20 days it’s pregnant, which can help lead to a healthier pregnancy and postpartum period.

Make sure the hamster has plenty of high-quality food and access to all of the water it needs. You can expect your pet to eat much more than usual, and it will do so at strange times of the day, so keep vigilant about refilling the food and freshening the water.

Once the babies are born, it is important to take the mother and litter to the vet to ensure everyone is healthy and healing correctly. This visit can also help you get advice about helping the mother through the postpartum period.

When Can Hamsters Give Birth?

Most hamsters can start to breed around 8 weeks of age, and the gestation period is usually around 20 days. The surprising part is they can get pregnant again only a few days later, so you can wind up with more hamsters than you expected if you don’t keep the male and female separated.

Will The Father Eat the Offspring?

Unfortunately, the father hamster may eat the children in an attempt to get the mother’s attention, and it won’t be long before it sees the offspring as rivals or competitors. Once he sees the children as an enemy, he may turn violent, so we recommend separating the male except for mating to minimize risk.

How Long Do Hamsters Live?

Lifespan depends on the type of hamster, but most live 2–3 years on average, with some living a little longer if they receive proper care.

What Care Can I Provide for The Pups?

Hamsters have an average of 6 to 12 pups per litter, but the actual number can vary significantly, with some producing as much as 20. They breed very quickly, and it can be hard to manage, so most experts recommend separating the males and females unless you intend to mate them to produce offspring. Most hamsters can become pregnant at only eight weeks old and will remain fertile almost their entire lives.