Can Chinchillas Eat Raisins? What You Need to Know! 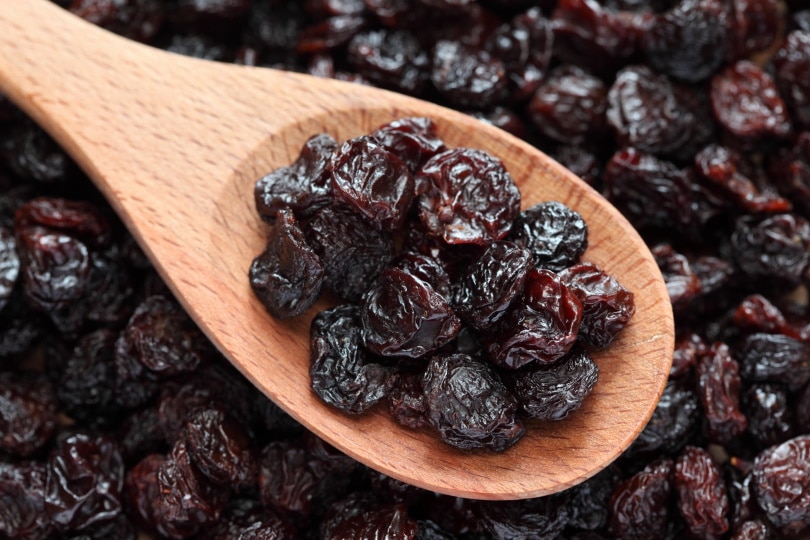 Chinchillas, affectionately knowns as chins, are cute rodents with large eyes, round ears, bushy tails, and plush, soft fur. While they are large rodents, reaching 9–15 inches in length and weighing 1–2 pounds, they are commonly kept as pets due to their ease of care and adorable appearance.

If your chinchilla is healthy, they can live between 10 and 20 years! It’s important to make sure you’re meeting your chinchilla’s needs, and this includes offering them a proper diet. Can raisins be a part of that diet?

While raisins are a snack that dogs and cats shouldn’t have, the good news is that chinchillas can safely enjoy raisins in moderation. Let’s look at how raisins fit into a chin’s diet and what else you need to know about this fluffy animal’s food.

The diet of a wild chinchilla may differ from a domesticated chinchilla, but their nutritional needs are the same.

Chinchillas are omnivores. In the wild, they eat mostly grass, hay, leaves, berries, nuts, and flowers. They will also eat insects and bird eggs if they have the opportunity to do so. Wild chinchillas eat bark and twigs to help grind down their teeth. Chinchillas’ teeth never stop growing, so they have to keep them filed down by chewing on rough materials. The wood they eat also helps their digestive systems stay healthy.

When feeding your pet chinchilla, you should stick to a diet that would most closely resemble what they would eat in the wild. Their digestive systems are sensitive, and they need certain foods to keep them working properly.

The main ingredient in your Chinchilla’s diet should be hay. Timothy hay is abrasive enough to wear down their teeth, and your chin should be offered as much of this as they like. Feeding this hay will encourage chewing and keep their teeth growth under control. Pellets may be added to their diet, but only 1 tablespoon per day should be offered to your adult chinchilla. These pellets don’t require as much chewing as hay and therefore won’t work to do much to keep your chin’s teeth healthy. If chinchillas don’t get enough things to chew to keep their teeth worn down, this could lead to dental issues, along with the chin no longer being able to eat. A veterinarian will have to file their teeth down and keep the problem from becoming worse.

Fresh, clean water should be available at all times. Chinchillas need plenty of water to help them digest their fibrous diets.

In addition to the chin’s primary hay diet, you may offer them treats on occasion. It’s best not to offer them too often or in abundance because the chin’s digestive tract is not designed for them. However, when you feel like giving your chin a special surprise, raisins make a good treat for them.

If the chinchilla is receiving proper nutrition in their daily diet, occasional treats won’t be a problem. Raisins are high in sugar, which is something to keep in mind. Too much sugar for chinchillas can lead to diabetes and weight gain. Since sugar isn’t something that chinchillas normally digest, it can also cause diarrhea.

Offering your chinchillas two to three raisins per day, no more than twice a week, will be enough to let them enjoy the treat without making them sick. If you notice your chinchilla experiencing any gastrointestinal distress due to eating raisins, reduce the amount that you offer them or switch to a different treat.

Foods to Avoid Giving to Your Chinchilla

Since Chinchillas have sensitive digestive tracts, it’s best to avoid the foods that have a high risk of making them ill. Raisins are safe for your chin to have in moderation, but there are other foods that should be avoided.

Many chinchilla treats that you can buy at the pet store are filled with artificial colors, fats, sugars, and chemicals. These treats can cause obesity in your chinchilla and rot their teeth.

Chocolate is high in sugar and fat. Your chinchilla is not able to digest this well, and it could lead to illness.

These foods may sound healthy, but in addition to the high sugar content of the fruits, both fruits and vegetables contain excess amounts of water.

Sugar can lead to obesity and excess water can cause bloat. Chins don’t naturally digest fresh fruits and veggies, so they shouldn’t eat them as pets.

Nuts and seeds are primarily full of fat and protein, two things that chinchillas don’t eat much of in the wild. They aren’t able to properly digest nuts and seeds, and too many of these foods can lead to health issues.

If you have any questions about whether a certain food is safe for your chin, always check with your vet first before offering it to them. Other foods that can be harmful to your chinchilla include:

Chinchillas can safely eat raisins but should do so in moderation. Raisins are high in sugar and can cause health problems if your chin eats too many of them.

Chinchillas are made to digest diets that are high in hay, grass, plant leaves, and wood. A proper daily diet filled with these things will keep your chinchilla healthy enough for an occasional raisin as a treat.

Chinchillas’ teeth never stop growing, so always make sure you provide them with enough hay and abrasive things to chew to keep their teeth from becoming too long.

By avoiding foods that are high in sugar and fat and only offering your chinchillas acceptable treats in moderation, you can keep your furry friend healthy and happy for many years.