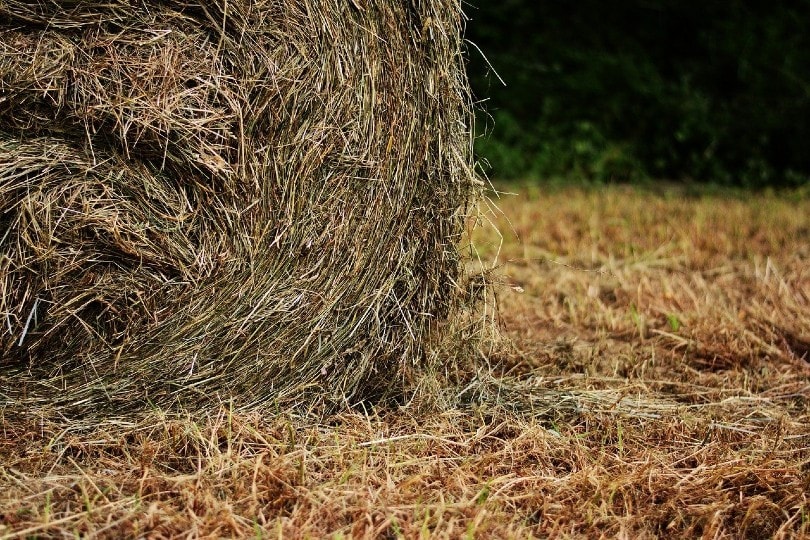 Many people relate guinea pigs and hamsters to each other because they are both parts of the larger rodent family. If you owned a guinea pig at the same time as a hamster or before, then you might wonder if they need hay like a guinea pig.

Although there are many hamster toys and objects for a hamster enclosure made from hay, is it safe for them to eat? What else, if anything, do they typically do with it?

The short answer is yes. Hamsters can eat hay, but they don’t need it like guinea pigs do. Instead, they will eat it only if they like it with their regular food.

Hamsters get some nutritional benefits from eating hay, although their diet will not be much more balanced if they eat it.

Some hamsters will chew hay instead of eating it. They will not swallow, so the fibrous materials will help file down their teeth. They will do a similar thing with wood in their cage, which works better, anyway.

Some hamsters simply do not like the taste of hay. If that’s the case, they won’t give it a second look after trying it for the first time.

Nutritional Benefits of Hay for Your Hamster

Hay doesn’t have many nutrients left in it, since most of them were chemically broken down during the drying process. The most significant aid that it gives your hamster is a healthier digestive tract. It helps them maintain a good flow because it is so fibrous.

By helping with digestion, hay also helps your hamster maintain a healthier weight. It rids them of treats that might have caused clogging or excessive weight gain due to a slower metabolism.

Types of Hay That Your Hamsters Can Eat

Hamsters can eat most hay types, although it is typically best to stick to the more common varieties. They can safely eat timothy hay, clover, alfalfa, and orchard grasses. Alfalfa and timothy hay are the best for hamsters, primarily due to more hamsters preferring their taste.

If you want, you can try dried herbs to give to them. Feed them things like dried daisies, marigolds, chamomile, or wheat if you want them to try something new.

Hay is safe enough that there is no maximum quantity that your hamster should eat during the day. Feel free to leave a small bundle in their enclosure that they can pick on whenever they want.

You can also combine these general sizing portions with various toys and treats made predominantly from hay. If they do not prefer the taste of the typical flavors of alfalfa and timothy hay, break out the dried herbs.

Potential Dangers of Hay for Hamsters

Hamsters are not typically associated with hay because they do not require it in their diet like guinea pigs and rabbits do. They will be happy enough to chew on it for the most part, and there are no real dangers of feeding them this treat.

Hamsters are smaller rodents than guinea pigs and rabbits, making larger and more challenging pieces of hay more difficult to chew. These pieces can also be more difficult for them to digest than for other rodents.

However, none of this adds up to being dangerous for your fuzzy friend. They are not going to overindulge on hay, and it has not been shown to cause any allergic reactions in them.

Since hay can be dusty, it is best to air it out for your hamster before putting it in their cage. The hay won’t hurt them, but too much stirred-up dust could cause them to have breathing problems.

Not all hamsters will like hay. If your pet doesn’t seem at all attracted to the taste or smell, you can try out other kinds of hay. It isn’t necessary for their diet, though. You don’t have to push them toward it too hard.

If you see your hamster using the hay as a source of bedding instead of chewing it up or eating it, don’t be surprised. Hamsters like to use anything that they deem soft and comfortable for their beds and nests. They will collect all kinds of things, and putting hay in as a bedding supplement encourages them to forage, strengthening their instincts naturally.

Hay is safe for your hamsters as long as it is aired out and not covered in dust. It is best to get it from a pet producer and not take it from a farm, since you can never be sure what chemicals have been used in its production.

Whether your hamsters like the taste of hay, they are bound to use it for something. Test multiple types out to find their favorites.