Chinchilla Growth Stages: When Do They Stop Growing? 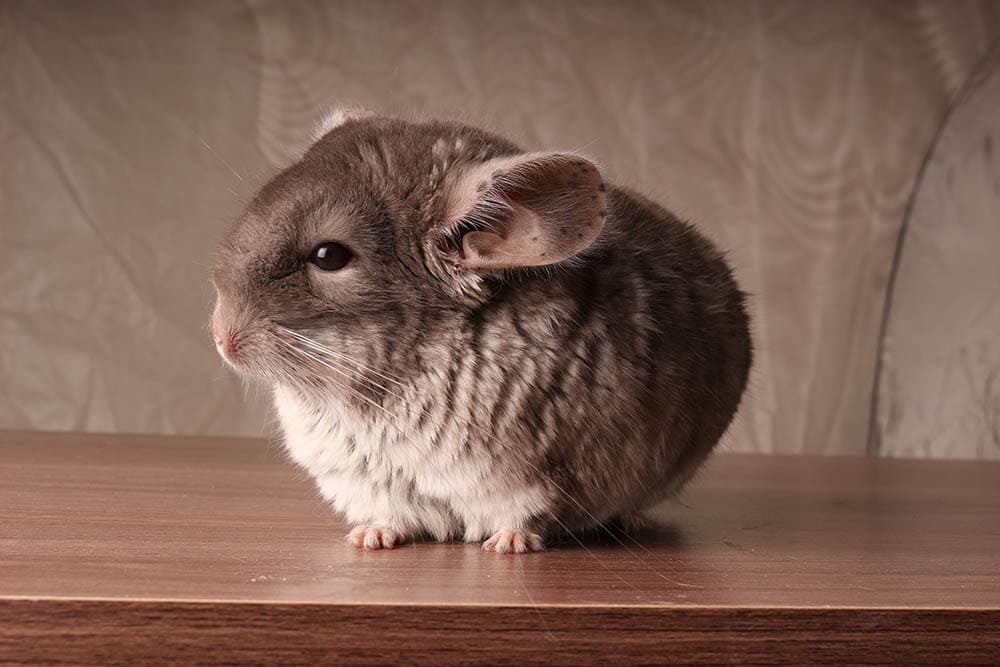 If you have recently adopted or purchased a chinchilla, you may be wondering how to tell when your chinchilla is fully grown. This will help you determine the right sized cage for your chinchilla and any future size adjustments you should make in the future.

There are two main captive-bred species of chinchillas, and each species grows to a different size. Namely the short-tailed chinchilla, and the long-tailed chinchilla. Chinchillas grow quickly, and they should be fully grown at around two years of age. Their growth rate will be affected by their diet, health, and genetics. So, when you get a chinchilla, their adult size may differ.

A chinchilla has approximately five growth stages, from the gestation period, all the way to its adult stage. A healthy chinchilla with a good genetic background can live between 20 to 30 years on average. However, in the case of captive-bred chinchillas, anywhere between 10 to 18 years is common.

They can weigh between 25 to 80 grams at birth and are born with a full coat of fur and open eyes right after birth. A kit is wobbly and unstable after birth, but they soon become more agile a few hours later. They will spend the first few weeks of their life huddling with their mother for food and warmth. After about 8 to 12 weeks, the kits will start to become more mature and independent, however, they are not close to being fully grown yet.

After 2 to 3 months when the mother begins to reduce the amount of time they nurse their kits, they become known as ‘weanlings. They should be separated from their mother and placed into new cages with their same-sex siblings. During this transitional time, weanlings will become stressed and may need time to get accustomed to the dietary changes. This can make them appear less round and stocky than when they were still being nursed by their mother.

This stage continues throughout most of their first year. At this stage, they are rapidly growing and learning. Male chinchillas may be considered sexually mature after 8 months of age, whereas females will take longer to be considered fully sexually mature for breeding purposes. Juvenile chinchillas are not fully grown yet, but they are almost there!

Around 12 months of age, juvenile chinchillas are considered adults. This is the final stage where they will slow down any growth or stop growing altogether. They will acquire their adult fur and size, which can differ between the species of individual gender of the chinchilla.

How Big Do Chinchillas Get?

The short-tailed chinchilla grows larger and is fully grown at around 12 to 18 inches in length. They will weigh between 2 to 3 pounds and have energetic and active personalities.

Long-tailed chinchillas are smaller and considered to be fully grown between 1 to 2 pounds. They can range from 9 to 15 inches in length from head to tail. This is the most common form of pet chinchilla in captivity.

You should not expect your chinchilla’s size to exceed 20 inches, measuring from their nose to tail. Nor should the two species of chinchilla grow any smaller than 8 inches in size, which is quite small and unusual.

When Do Chinchillas Stop Growing?

Both species of chinchillas will stop growing between 10 to 18 months of age. Once they reach two years old, they should stop growing altogether and only ‘fill out’ in weight. Female chinchillas will look stockier in comparison to males, which can make them appear bigger. However, this is only true for weight, and not length.

It depends entirely on the chinchillas’ genetics, species, and diet when it comes to determining why they have a certain growth rate. Chinchillas that are fed a healthy, balanced diet, will have a slow and steady growth rate. Whereas a chinchilla fed an inadequate diet may struggle to gain weight or absorb essential vitamins and minerals required for proper growth and development.

If a kit has been weaned too early from their mother, they may not have grown much during their first few weeks. This is because their mother’s milk is nutritious and necessary for fast growth as they enter their weanling or juvenile stage. They should begin to grow again a few weeks after they are fed a milk replacement or another form of a healthy diet. They may almost appear to be ‘stunted’, which can happen to many young rodents who are weaned prematurely. If you have recently gotten a weanling, ensure that they have been separated from their mother properly in the case of a breeder, otherwise, they may require a quality milk replacement to kick start their growth again.

If you find that your chinchilla is a runt, you may need to feed them additional supplements and milk to help keep them healthy. They may be small and slimmer than an average chinchilla, but this is hardly a cause for concern. A runt can live a healthy and long life, they may just require additional hand raising during their first few months.

Each chinchilla will have a slightly different growth rate, so do not be alarmed if your chinchilla is growing slower or faster than your cage mate or sibling. By identifying the species of chinchilla, you keep, you will be able to determine your chinchilla’s average adult size.

We hope that this article has answered any questions you may have had on a chinchillas growth rate and adult size.