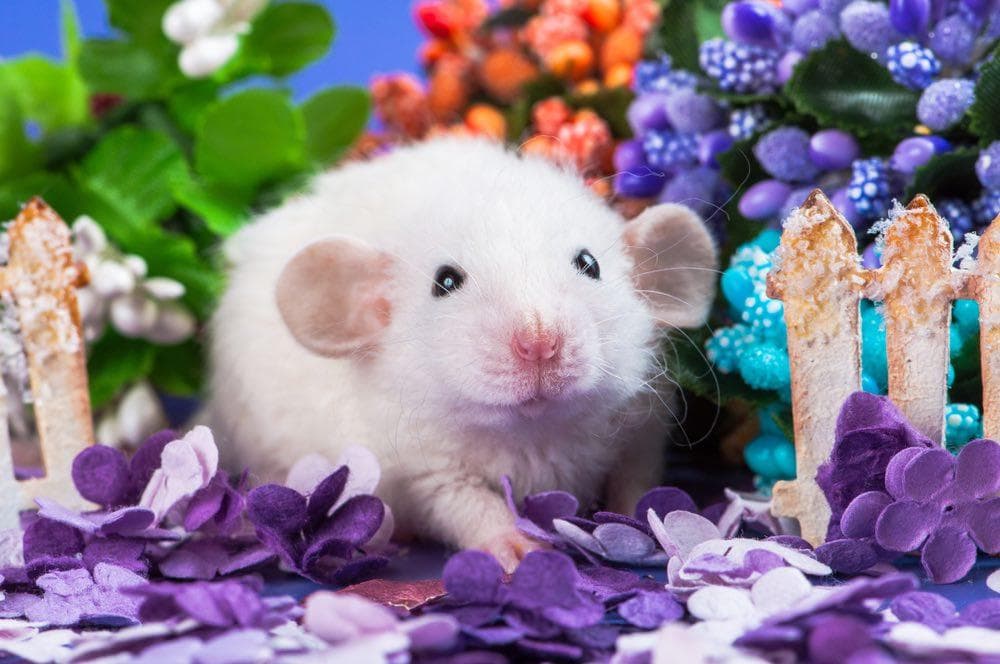 Sometimes it seems like scientists can have a mean streak, at least when it comes to naming animals. After all, how else can you explain animals like the spiny lumpsucker, chicken turtle, or the strange-tailed tyrant?

You can add the dumbo rat to the list of unfortunately-named creatures. These animals get their nickname from the fact that they have very large ears, just like the elephant in “Dumbo.” What’s worse is that “dumbo rat” isn’t even their real name — it’s “fancy rat!”

The Dumbo Rat is the most common species of domesticated rat kept as a pet, and they’ve been bred for companionship for so long that they’re docile and friendly.

Their history is a nasty one, however. They were used as targets in blood sports in the 18th and 19th centuries, and ironically, being bred for death is a big reason that the species was able to flourish. They’re also widely used in medical research, so they’re still putting their lives on the line for humanity even today.

While many people may recoil at the idea of keeping a rat as a pet, dumbo rats are much cleaner than their wild cousins, and they’re no more likely to carry diseases or parasites than dogs, cats, or other small rodents like hamsters.

Dumbo rats are much cuter than most other types of rats, due to a natural mutation that causes them to have round ears, large heads, small jaws, and wide eyes. These traits combine to give them an innocent appearance.

However, they’re not a different species than “scary-looking” rats — just a cuter variety. As a result, they’ll have many of the same behaviors and predilections, although generations of domestication have caused them to have different habits and be prone to different diseases.

How Much Do Dumbo Rats Cost?

If you’re looking to buy a dumbo rat from a breeder or pet store, you can expect to pay between $10 and $20, although certain colors of rat may cost a bit more.

However, many pounds and small animal rescues take in dumbo rats as well, so you may be able to get one for free or for a small adoption fee.

Dumbo rats are friendly and agreeable creatures. They’re calm and inquisitive and can be affectionate with people they trust. They don’t mind being handled, although it may take a bit of time to warm them up to the idea.

These animals are also extremely intelligent, and many people have taught their dumbos to do tricks. They’re social creatures, so they need regular interaction with people or other rats, and many experts recommend keeping at least two dumbos together at all times.

Since dumbo rats have been kept as pets for quite some time, many breeders have worked to develop special patterns and markings to make them more attractive to potential owners. The breed has spontaneously developed a few features of its own over the years as well.

There are two primary color types found in dumbo rats: agouti and black. Agouti means they have three different tones on each individual hair, which often combines to give them a gray or brownish coloring. However, agouti dumbos can also be found in cinnamon and fawn.

Black-based colors include beige, blue, chocolate, and straight black. The dumbo’s eye color will be dictated in part by their coat color, with black, pink, ruby, and odd-eye (which is two different-colored eyes) being the most common.

Dumbos can sport a variety of markings, including completely solid and Himalayan, which is a blended shade of white.

There are other standard marking types as well, including:

There are different coat types as well. The main differences lie in the coarseness of the fur, although some varieties have curly hair or silky coats.

How to Take Care of Dumbo Rat

Dumbo rats are fairly easy creatures to take care of and inexpensive. However, there is gear that you should own if you want to keep Dumbos, and we’ll go over the must-haves below.

Dumbo rats aren’t that big, so they don’t need massive enclosures. The minimum size cage you’ll need is 24” x 12” x 12”. However, while getting a properly-sized tank is important, it’s equally vital that you get a tank that has multiple levels, as they love to climb and explore.

Wire cages are your best bet and are vastly preferable to tanks, but you’ll need to put something on the bottom of the cage so the rat’s feet don’t get caught in the enclosure.

In addition to putting a solid layer at the bottom of the cage, you’ll also need to line it with a substrate of some kind. Recycled newspaper or aspen shavings are two popular options, although you can also use cloth, straw, or shredded cardboard.

Avoid using cedar or pine shavings, as these give off toxic fumes that can make your rat sick. Cat litter should also be avoided, as if your rat accidentally ingests some, it will clump in their gut, potentially killing them. Corn cob bedding has the same issue, but it can also get moldy and grow toxic spores.

Regardless of which type of substrate you use, you’ll need to clean your rat’s cage daily to keep them healthy (and to keep your room from smelling of rat droppings).

Dumbos do well at room temperature, so any thermostat setting that you like is one that your rat will probably be comfortable with as well. In addition to keeping the thermostat on a comfy setting, you should also provide them with enclosures where they can escape to beat the heat or cold if they like.

As long as you keep the temperature in your home at a reasonable level, there’s no need to add heat lamps to your rat’s enclosure. However, you should try to give them 12 hours of light and darkness per day to simulate a day and night cycle.

Beyond what’s listed above, your rat will need a food bowl, water bottle, play pen, and a separate enclosure to be put in when you’re cleaning their cage. You can also take them out and play with them regularly, which may lessen the need for buying other forms of entertainment.

Do Dumbo Rat Get Along With Other Pets?

Dumbo rats are social creatures, and keeping two or more dumbos simultaneously is often encouraged. They get along regardless of sex, but be careful about keeping males and females together unless you want to raise rat babies.

You can also have them spayed and neutered, though, and doing so is recommended to avoid same-sex aggression.

These rats are friendly and welcoming toward most other animals — a trait that often does not work in their favor. You should obviously keep them away from your cat, and dogs are hit-and-miss, with some ignoring them and others wanting to eat them.

For best results, you should just keep your dumbo with other rats. Other pairings can work, but you’ll be inviting trouble.

What to Feed Your Dumbo Rat

Commercial rat pellets should make up the bulk of your dumbo’s diet. These are specially designed to have all the vitamins and nutrients that your rat needs to be healthy. However, avoid seed/grain mixes, as rats usually only pick out their favorite bits from the mix — and those bits are usually the unhealthiest for them.

Beyond that, you can give them fresh fruits and veggies, but be careful not to overdo it on sugar-rich fruits. Leafy green vegetables are an excellent choice, as they’re full of antioxidants and rats love them.

You can give them grains like bread and cereal occasionally, but limit it to once a week or so. They’ll also eat small amounts of meat like bland chicken or scrambled eggs, and those are excellent for them due to the high protein content.

Dumbo rats are creatures of habit, so don’t be tempted to mix up their diets constantly. Feeding them the same things consistently is recommended to avoid gastrointestinal problems (assuming their regular diet has everything they need, of course).

They should be fed two or three times a day as babies, but once they’re fully mature, you can cut that down to once or twice a day. Be careful not to overfeed them, as obesity and diabetes run rampant in the species.

It’s fairly easy to keep a dumbo rat healthy, as doing so mainly involves feeding them a healthy diet and keeping their cage clean. They don’t have many needs beyond that, and there’s little need to take them in for veterinary care.

The flip side to this, unfortunately, is that your rat won’t live very long regardless of what you do. They only live for 2-3 years on average, so even if you’re extremely conscientious about taking care of your furry friend, you’ll likely only add a few months to their lifespan.

It’s equally important to see to their emotional needs, as well as their physical ones. This means giving them plenty of attention, affection, and stimulation and providing them with other rats to play and socialize with.

If you want to raise baby dumbo rats, it’s often as simple as putting an unaltered male and female in the same cage and waiting. You shouldn’t need to do any cajoling or anything of the sort — just let nature take its course.

Remember that the dumbo gene is a recessive one, though. If you want a litter of dumbos, you’ll need to breed two dumbos; if you breed a dumbo with a different type of rat, only half of the litter will be dumbos.

If you want a baby rat but don’t want to do the work yourself, there are plenty of established dumbo breeders out there, so finding one in your area shouldn’t be difficult (or particularly expensive).

Are Dumbo Rats Suitable for You?

If you’re looking for a low-maintenance pet that’s as cute and affectionate as any cat or dog, then the dumbo rat may be right up your alley. These adorable little creatures are incredibly friendly, and they can be as attuned to their human’s needs as any other pet.

They don’t take up much room and aren’t particularly expensive to own either. Of course, there is a huge downside, and that’s their incredibly short lifespans; owning dumbos means living in a cycle of becoming attached and having to say goodbye.

If you can handle the emotional swings, though, you’ll find an overlooked pet that will brighten your day every time they look into your eyes (and watching them twitch their little whiskers is pretty irresistible, too).

If you do decide on a dumbo rat and are in need of a name, check out our full list of over 100 awesome rat names!