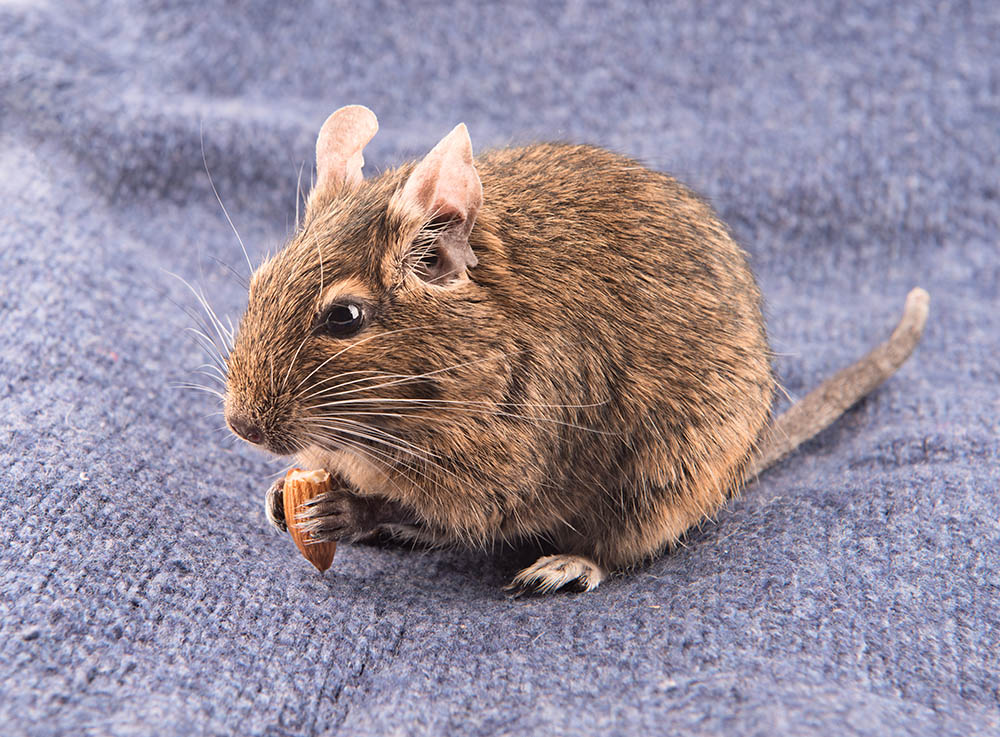 Most researchers agree that most wild rats don’t have a high chance of making it past their first birthday. However, humans have taken a liking to these cheerful animals and helped them live much longer and healthier lives. Rats make excellent pets. They are clean, intelligent, and have lots of personality. Rats are still considered pests in many parts of the world, but their likability is only becoming more popular. Today’s pet rats are also described as fancy rats. “Fancy rats” is a term used to describe any type of domestic rat, even though there are over seven kinds that we keep in captivity. They come in a wide range of colors and patterns and giving them the proper care has allowed us to extend their average lifespan by several years.

What’s the Average Lifespan of a Pet Rat?

The average lifespan for wild rats is under one year old, but the lifespan for domestic rats is at least two years, with some even surviving for up to five years. Extending their lives all comes down to how you care for them.

Where or who you purchase your pet rats from plays a major role in your pets’ health. Various genetic factors give your rats predispositions to certain life-threatening illnesses. Some other factors that could lead to a short life are inheriting poor immune systems or obesity. Even things like a lack of protein during the mother’s pregnancy could cause kidney failure in her young.

Choose to buy rats only from well-informed and ethical breeders. These breeders should be feeding them a healthy diet and only breeding rats with strong genetics. When you purchase them from a pet store or feeder bin, you’re really playing the lottery on their genes, and it could lead to heartbreak in the future.

Rats must be able to climb, run, forage, dig, and balance in their enclosure. Your habitat set-up should allow all these activities plus some. Rats prefer an open environment with barred cages to climb. Because rats suffer from conditions causing weak hind legs, keeping them somewhere where they can stay both mentally and physically fit is ideal.

Rats are similar to humans in that they require antioxidants to reduce inflammation and cell damage that occurs with aging. The best option for giving your rats healthy antioxidants is by feeding them a daily portion of fruits and veggies that are rich in nutrients. These foods wind up in the bloodstream and circulate through their body to reduce oxidative stress. Common foods to feed your pet rats include berries, kale, nectarines, kiwi, dandelion greens, carrots, bell peppers, broccoli, beets, and kale.

While rats do need a well-balanced diet, many are prone to obesity and could develop more health issues if you don’t restrict how often they feed. You should only feed your rats once per day to keep them fit and lean. Most of a rat’s diet consists of about 15 grams of dry rat food with a tablespoon of fresh fruits or veggies for every rat.

When rats get too large, they start to have many different health issues such as:

Rats can only exercise so much while in their enclosure. That is why we see hamster wheels inside the cages of all types of rodents. Rats that use a large wheel for running are more likely to live longer than those that don’t exercise. Try to stay away from smaller wheels that aren’t big enough for them and could create issues with their spines and tails.

Stress is a normal bodily response for all animals. Stress is a response to fear or challenging circumstances. Biologically speaking, a rat’s response to stress is the same as humans. Even if it is from small and infrequent stressors, prolonged stress could lead to depression or PTSD. Stress for a rat could include moving to a new home, changing cages, illness, overcrowding, social stress, or the death of a cage mate. Try to reduce any unnecessary stress for them whenever possible.

It has been proven that a lack of adequate sleep will shorten the lifespan of a rat. Rats require a dark and quiet sleeping area where they can rest without and disturbances from lights or noises. Because rats sleep primarily during the day, a dark location is crucial for their health.

Rats are social creatures and spend most of their lives in a group. They crave connection, and isolation may even create unwanted stress. Many rat owners often have more than one rat at a time to keep them from getting lonely.

The 4 Life Stages of a Pet Rat

Rats have a relatively short life cycle that gets divided into four stages: newborn, four weeks, one year, over one year.

The newborn stage starts once the rat is born. Newborn rats are extremely small, blind, and dependent on their moms. They start to grow quickly and are crawling at only five days old. At two weeks, their eyes begin to open.

At four weeks old, a young rat no longer needs its mother to survive. They are fully alert at this age and able to feed themselves. However, they still rely on their siblings to socialize. Most baby pet rats are brought home when they are between six and eight weeks old.

By one year old, rats have reached adulthood. They are active, playful, and should be trained at this point.

Rats that are over one year old may start to show signs of aging. They are usually less active and begin to develop health problems that you see in most older pets.

How To Tell Your Pet Rat’s Age

A rat’s aging process is another thing that is somewhat similar to a human. Aging rats start to lose their overall muscle mass and body weight. Their motor functions start to deteriorate, and some might even develop arthritis. An older rat often has weak hind legs, their tails move abnormally, and they have stiffness in their joints.

Even though you knew your pet rat couldn’t live forever, that doesn’t mean it hurts any less when you start to watch them age. Loving and caring for your rat in the best way possible is likely to give you two or three good years with them. As much as we wish they could live longer, their life cycle is completely natural, and you should be proud that you gave them such a long and comfortable life free from worry.