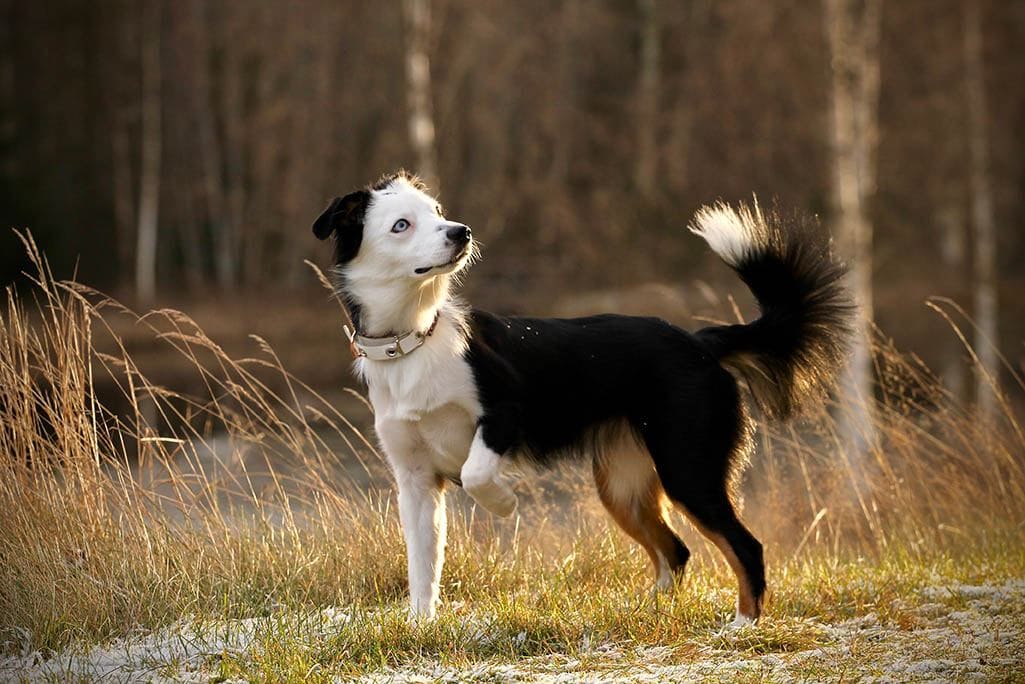 For a while there was no difference between the two dogs apart from that name chance but gradually changes did happen and today these are now related but different dogs. The Miniature American Shepherd looks similar but it is smaller. In 2011 the Miniature American Shepherd entered the Foundation Stock Service stage of gaining recognition with the AKC. In 2015 it gained full recognition from the AKC and from the United Kennel Club also.

The Miniature American Shepherd is a small to medium dog that weighs 15 to 35 pounds and stands 13 to 18 inches tall. It has a strong body but it is not bulky and its topline is level. It is a little longer than it is tall giving it a slight rectangular shape and it is all in proportion. Its tail tends to be a natural bobtail or docked to a length of three inches or shorter, though in some countries tail docking has been made illegal. Its coat is double with an undercoat that is short and soft and can vary in thickness depending on the season and climate. It is a straight or wavy outer coat that is medium length and there is some feathering on the back legs. There is a mane or frill around the neck and that is more obvious in males than females. Common colors are black, red, blue merle, red merle and there can be some tan or white in certain places.

The head of the MAS is in proportion to the body and it has an alert look. The eyes are almond shaped and should neither be sunken nor protruding. Colors can be blue, brown, amber or hazel and there can be a mix. The eye rims can be liver colored or black depending on the coat color. Its ears are medium sized, triangular shaped and set high.

The Miniature American Shepherd is an intelligent breed, and since it was bred to be a working dog it has qualities you would want from such a dog, hard working, committed, enthusiastic and determined. It is also a loyal and devoted family companion, it has protective instincts and it is alert so it will let you know of intruders and try to defend you too. It is should not be shy but it is wary at first with strangers until it is sure they are not a threat. Neither should it ever be aggressive. It is eager to please, adaptable and resilient too.

It has energy and loves to play and apart from initial wariness with strangers it gets along with everyone. Without early socialization and training though you may see behavior problems such as destructiveness, barking and being unruly. As long as it gets to burn off enough energy and is looked after well though this should not be a problem. It can be left alone for short periods of time but it forms close bonds and prefers not to be alone for a long time.

Living with a Miniature American Shepherd

The MAS is intelligent, eager to please and generally easy to train, especially if you remain confident, in charge and consistent with it. Use positive training methods, give it praise, offer treats and rewards to encourage it and motivate it. It may retain the instinct of herding even if not being kept as a herding dog so make sure part of its training is to stop it nipping at people’s and pet’s heels. It can be a good dog for a new owner who is willing to learn how to be a good one! Make sure the socialization part of training starts early so it can learn to recognize friend from foe and knows how to respond to different situations, places, people, animals and so on.

How active is the Miniature American Shepherd?

This dog really does need daily exercise, it may be smaller but it still is used to either being a working dog or getting plenty of activity and mental stimulation. It will need a couple of at least moderate length walks a day, some physical play time with you and then some opportunities during the week for safe off leash run time. A dog park is such a place and also where socialization can happen. It can do well in doggy sports like disc dog, agility, fly ball and such. It is a very agile, lively and athletic dog with a lot of stamina so needs active owners.

Caring for the Miniature American Shepherd

The Mini American Shepherd’s coat is dense and medium long with some feathering so it needs to be brushed a couple of times a week to prevent tangles, remove debris and get those oils moving around its body. It does shed a moderate amount so some hair will be left around the home that will need vacuuming up. It is not a so called hypoallergenic breed. Avoid giving it bath set to a too frequent schedule as that can in fact damage its natural oils, for the same reason use only canine products.

Along with its coat care there are other factors to looking after your dog. Its teeth should be brushed regularly to avoid tooth decay and gum disease. Daily is ideal but at least two to three times a week using a canine designed toothpaste and toothbrush. Then its nails need to be kept to an acceptable length and they should be cut using proper clippers for dogs. Dog nails are not like ours though, in the lower part of them are blood vessels and nerves so cutting too far down will cause bleeding and pain. Its ears too need regular care. Check weekly for infection signs and give them a clean by just wiping where you can reach, not by inserting anything into them.

It will need to be fed at least 1 to 2½ cups of good quality dry dog food a day, divided into at least two meals. It depends on its metabolism, size, activity, age and health. It also needs water which is kept as fresh as possible.

How is the Miniature American Shepherd with children and other animals?

The Miniature American Shepherd can be good with children as long as the kids are taught not to pull ears or tails and such. Early socialization helps with their interactions, and being raised with them is also a great way for them to bond. They should enjoy playing together and burning off some energy together too! It can also get along well with other pets. Remember to include training to check any heel nipping. With other dogs it can actually vary from one MAS to another, some get along well and some have more issues with dominance and territory and such.

It has a life span of about 12 to 15 years and is a somewhat healthy dog but there are some issues it can be prone to including Hip Dysplasia, Eye problems, Cancer, drug sensitivity and patellar luxation.

There are no reports over the last almost 4 decades in North America of the Miniature American Shepherd attacking a person. For the sake of disparity though perhaps it is worth mentioning, (since they are related) that the Australian Shepherd has been connected to 11 such attacks, 7 of which were against children. This averages at roughly one incident every 3 or 4 years. The Miniature American Shepherd is not aggressive but all dogs have the possibility of an off day or being drawn in by something to act in a way that is not normal for them. Make sure you socialize, train, exercise and give it the attention it needs though and you can minimize those chances.

The going puppy price for a Miniature American Shepherd today is about $1200. You can get one for less if you manage to find one at a shelter or rescue as adoption fees range between $50 to $400. Or you could pay even double or triple that from a show dog breeder or one with a top reputation. Be prepared to do some homework and research, go out and check out breeders physically when possible. Avoid places that have a bad reputation and places like pet stores, puppy mills or backyard breeders.

Along the time you are getting your puppy you are going to need to pay for initial costs on health needs and on items it will need. Once it has settled in it will need a vet visit for things like blood tests, deworming, shots, micro-chipping, neutering or spaying and a physical exam and this will be about $270. Those items includes basics like a leash and collar, a carrier, bowls and a crate. These come to at least $200.

Obedience training is something all owners should do with their dogs and that along with a license, other miscellaneous items and toys will be about $210 a year depending on whether you do the training or use a professional or school. Then feeding the MAS will cost another $140 a year for a decent quality dry dog food and dog treats. Yearly medical costs for basics like a vet check up, vaccinations, flea prevention, pet insurance and heartworm prevention come to at least $460. Overall you can expect an annual estimated starting figure cost of $810.

Looking for a Miniature American Shepherd Name? Let select one from our list!

The Miniature American Shepherd is an active and intelligent dog that can be a great working dog and a great companion. It can do well in various types of canine sporting events too. It will be a devoted and loyal friend, affectionate and loving with its family but wary with strangers so socialization is important. Make sure you are firm and consistent with it and it will be happy to follow your lead. It has a level of sensitivity that also makes a good therapy dog and it does well as a search and rescue dog and in service.