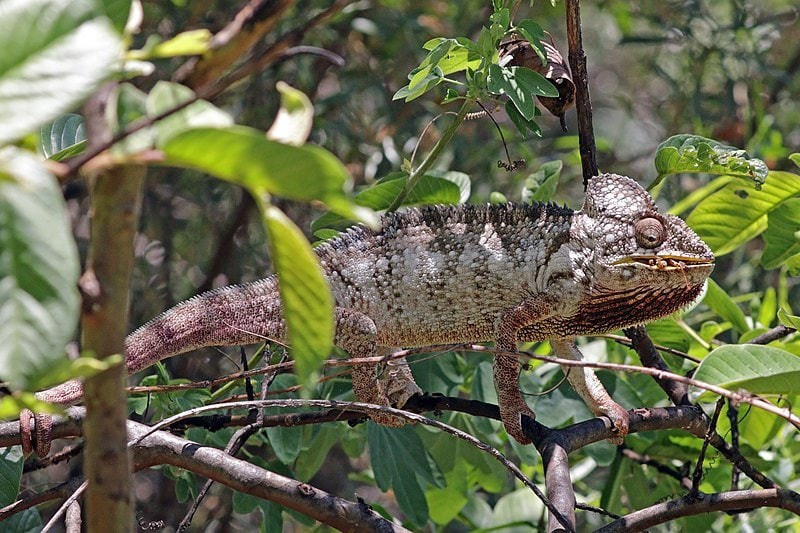 Pronounced “ooh-stuh-lay”, Oustalet’s chameleons are the longest chameleons on earth. If you love raising chameleons, an Oustalet’s could be an incredible addition to your family. However, be forewarned. They aren’t easy to raise.

Chameleons are not simple creatures to take care of, generally speaking. And these are difficult even for chameleon standards! We recommend only expert chameleon owners invest in raising an Oustalet’s. Their giant size absolutely contributes to this.

However, those who successfully raise Oustalet’s chameleons find it to be one of the most rewarding reptilian experiences.

Oustalet’s Chameleons – Before You Buy…

One major consideration you need to look at before purchasing an Oustalet’s chameleon is where it was born. Was it wild-caught or captive-bred?

This is extremely important for health reasons. With captive-bred chameleons, you know the exact diet of the lizard, making it much easier to control and monitor parasitic infestation. However, wild-caught chameleons — especially the larger ones — you can’t be too sure of. Larger Oustalet’s chameleons have been known to eat not just insects, but small lizards and birds.

This can lead to a bevy of health problems and parasites. And due to their size, the parasite load is much larger than that of other chameleons. They can be fully cleansed, but it will take some time. Other than that, they are actually much more sturdy and resilient than smaller chameleons.

What’s the Price of Oustalet’s Chameleons?

Although they are the largest of chameleons, Oustalet’s chameleons aren’t necessarily the most expensive. They’re actually relatively inexpensive as far as chameleons are concerned. You can find one for purchase for as low as $60.

But like all chameleons, the sticker shock doesn’t really kick in with the chameleon itself. It’s everything else you need to properly care for one. Chameleons require a lot of special equipment to care for — and the Oustalet’s chameleon is no exception. As a matter of fact, their size actually makes them even more expensive to raise.

In order to ensure that you have a constant food supply, we recommend that you also breed and raise insects as feed. This will be much more cost-effective than bulk buying the number of insects required to keep an Oustalet’s chameleon well-fed.

Oustalet’s chameleons are named after a famous French zoologist Jean-Frederic Oustalet, but Oustalet wasn’t even the one who discovered them. That honor actually goes to French herpetologist Francois Mocquard, who described the species in 1894 and dedicated the name as a tribute.

2. They Compete with the Parson’s Chameleon for World’s Largest

Temperament & Intelligence of the Oustalet’s Chameleon

For the most part, Oustalet’s chameleons are pretty laid back. Even though they are territorial creatures, they’re rarely aggressive to their owners when in captivity. However, that can change over time and depend on whether it’s time to mate.

Normally, juvenile chameleons are more loyal to the hand that feeds. Therefore, they’ll be more tolerant. But as time progresses, they’ll need less frequent feedings, which can lead them to be more aggressive. They’ll also become more aggressive during mating season.

So if ever your chameleon starts becoming more hostile towards you, stop all handling maneuvers and observe. You may find that your chameleon is just becoming ill and in need of veterinary attention.

Are These Chameleons Good for Families? 👪

This actually depends. Unlike most chameleons, these are too big for small children to effectively handle. However, they don’t spook as easily as smaller chameleons do. If you have them set up in an outdoor habitat, they can be a very neat observational pet for even younger kids.

That being said, we don’t recommend that the children be directly involved in the care at first. They should learn from you (the expert handler) how to rear chameleons properly. This can lead to a future reptile lover who can start smaller on their own in the future.

But if you have children who just can’t keep their hands to themselves, this is not the pet for you. Chameleons generally do not like being held or touched. And they will bite if threatened.

There have been reported cases of these chameleons getting along with fellow Oustalet’s chameleons. However, these are few and far between. Generally speaking, chameleons don’t play nice with others. They are very territorial and aggressive toward other chameleons they perceive to be a threat.

Things to Know When Owning an Oustalet’s Chameleon:

Owning an Oustalet’s chameleon is a pretty big task. It involves lots of specialty care even as far as chameleons are concerned. That’s why you need to do your research and ensure you’re up to the task before making the commitment.

You might think it’s best to feed a chameleon of this size 10-20 insects every day. But that’s definitely not the case. As a matter of fact, the bigger they get, the less you’ll actually need to give them.

As juveniles, they’re going to need much more food. Daily feedings should be a normal occurrence. Offer 3-5 size-appropriate insects per feeding. Fully grown adults can actually be swapped over to feeding every other day.

Oustalet’s chameleons absolutely need large enclosures. While smaller chameleons (such as the Jackson’s chameleon or Senegal chameleon) can manage in a space 1 foot long by 3 feet tall, a fully grown Oustalet would barely even fit inside. The truth is that finding the amount of space to dedicate to an Oustalet’s enclosure inside your house can be difficult.

Monitoring your Oustalet’s chameleon’s hydration levels is extremely important for the well-being of the reptile. Due to their size, you’re going to need to be extra vigilant in making sure they don’t become dehydrated.

If you haven’t invested in a quality hygrometer for your chameleons, you’ll absolutely need one for an Oustalet’s. A hygrometer is a device used to measure the humidity in the air. An Oustalet’s chameleon requires at least 70% humidity at all times.

But even if you meet minimum humidity requirements, you’re still going to need to hydrate your chameleon every day through spraying plant leaves and the lizard itself. However, that’s still not enough hydration by itself. At least once a week, you’ll need to give your chameleon a shower. Let them soak up some water for 30-60 minutes. This may sound difficult, but it’s pretty simple. Just put them on a favorite potted tree, and then put that tree in the tub. Turn on the shower and let the water fall on them as if it were a light, cool rain.

This frequency of showering is just bare minimum. If you live in a hotter area or you can visibly see signs of dehydration, you need to up the water intake.

Chameleons are known for being rather delicate creatures. However, the Oustalet’s chameleon doesn’t follow that stipulation too closely. They’re actually pretty tough for a chameleon. They can last longer when there are changes in temperature and humidity. And they don’t suffer from as many stress-related illnesses as other chameleons do.

They do still, however, fall prey to some of the more common chameleon conditions such as gout, bone disorders, and kidney failure.

The issue that affects the Oustalet’s more specifically than other chameleons is parasitic infection. Their size equates to a larger infestation load, making parasites much harder to fight. Also, wild-caught chameleons will generally have a much higher parasitic count on top of that. Fighting off parasites can be done, but it will be much more difficult than in any other chameleons you’ve probably ever dealt with. So, it’s definitely something to keep an eye out for.

Males and females do have some pretty distinct differences when it comes to Oustalet’s chameleons. The males are much larger than females. They can be up to twice as long! But the females generally have brighter color patterns and changes. This is very unusual in the chameleon world.

Deciding to raise an Oustalet’s chameleon is not a decision to be taken lightly. You really need to sit down and determine if you’ve got what it takes. It’s going to a challenging ride from start to finish. And if you’re not a chameleon expert, we don’t recommend you try.

However, if you have the knowledge and facilities to take on one of the planet’s biggest chameleons, it can be a super rewarding experience.