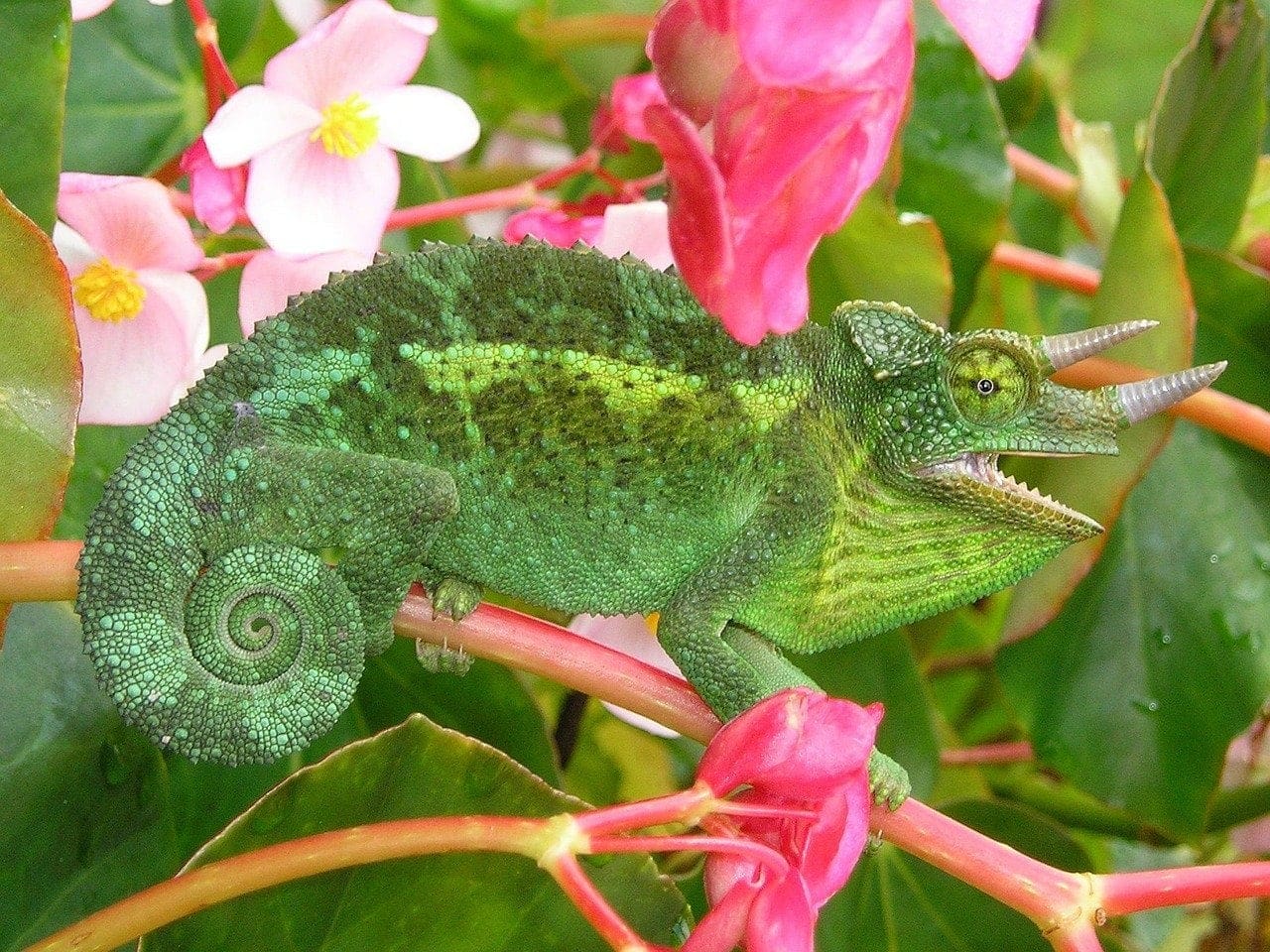 Jackson’s chameleons are among the most unique pet options you can choose from. Even when compared to other chameleons! What makes them stand out so much is that the males have a series of three horns protruding from their faces. Just like they’re a modern-day Triceratops — just smaller.

They’re also a bit less temperamental than other chameleons. Just be warned: They will still bite. Chameleons don’t like being handled in general.

One advantage that Jackson’s chameleons have is that they’re relatively smaller than some other species, such as the Panther chameleon or Veiled chameleons. This means you can get away with having a smaller enclosure.

So if you’re into reptiles and are looking to take the step up into chameleons, a Jackson’s chameleon might be an option to consider.

Jackson’s Chameleons – Before You Buy…

When you decide to become a chameleon owner, you’re taking on a big commitment. These are some of the most difficult pets to raise and maintain. Although they have a relatively laid-back nature, their care is anything but.

Chameleons require some very specific conditions in order to live properly. Their habitats must be specially designed in order to maintain proper health. This includes having proper UV lamps and heat lamps all set to exact times of operation, branches and a mesh cage for climbing, a specialized misting system, etc.

In a nutshell, chameleons are not for first-timer reptile owners — or pet owners.

However, if you’re up for a challenge and have the time necessary to dedicate to these wonderful creatures, we don’t want to discourage you. For those of you into reptiles, raising chameleons may be a great goal to accomplish.

What’s the Price of Jackson’s Chameleons?

You can pick up a Jackson’s chameleon somewhere between $75-$175. But that’s nothing compared to what it costs to start and maintain a habitat. Chameleons are not cheap pets. They require lots of specialized equipment for their habitat to be properly maintained. On top of that, you’ll need to buy lots of live insects for food. And you just might need to raise insects just for food. So there are more costs there.

The bottom line is this: Chameleons are expensive. Do not jump headfirst into purchasing a chameleon if you do not have the financial resources to care for them.

The scientific name of a Jackson’s chameleon is Trioceros jacksonii. Triceros means “three-horned”, and jacksonii is just some Latinized form of Jackson. The “three-horned Jacksons” are named after English explorer and ornithologist Frederick John Jackson who was serving as the first governor of Kenya at the time of their naming.

2. They’re Considered an Invasive Species in the State of Hawaii

As neat as they are to watch, these chameleons aren’t welcome everywhere. Shortly after Jackson’s chameleons were introduced to Hawaii, they quickly began reproducing and feeding upon the existing ecosystem. And their impact was absolutely devastating. Hawaii has unique native biodiversity to invertebrates including the critically endangered Oahu tree snail. And these invertebrates have been found within the stomachs of Jackson’s chameleons — shell and all.

When you think of reptiles giving birth, it’s normally an egg-laying process. However, such is not the case with the Jackson’s chameleon.  They give birth to live young. A single chameleon can give birth to up to 30 live young at one time! This happens over a five to six month gestation period.

Temperament & Intelligence of the Jackson’s Chameleon

You may not believe that these creatures have any real feeling or temperament. But that’s nowhere near true. As a matter of fact, you’ll be able to tell how your chameleon feels just by looking at them.

Chameleons, in general, are known for their color-changing capabilities. This they use for camouflage, body temperature regulation, and even to convey their feelings to you or other chameleons. Bright and vibrant colors (such as emerald greens, blues, and yellows) generally indicate that the chameleon is doing just fine. However, dull greens and browns can show that something is bothering it. This can mean anything from they’re just grumpy to they are quite sick.

Are These Chameleons Good for Families? 👪

While Jackson’s chameleons are super neat to observe, they’re not the ideal family pet. Unlike other animals such as dogs, cats, or rabbits, chameleons aren’t cute and cuddly. In fact, they quite the opposite.

They do not like being handled and are not hesitant to bite. Even the Jackson’s chameleon, with its relatively docile temperament, will bite without a moment’s notice. They’re best just to watch from afar.

Also, they get stressed out easily. And that spells out bad news for the chameleons. Stress-related illnesses can cause death in these reptiles. They’re sensitive to loud noises and yelling as well. So families with younger, boisterous children will find having a chameleon to be much less rewarding.

Chameleons are not the friendliest of pets. They prefer to be alone, spending their days climbing or clinging onto tree branches. Jackson’s chameleons are particularly uncomfortable around others — particularly other male chameleons. They are insanely territorial and will use their horns to battle it out.

If you plan on keeping two, we recommend choosing two females or one of each sex. However, when choosing one of each, the possibility of breeding is very real. Males and females should be kept apart to prevent this.

Things to Know When Owning a Jackson’s Chameleon:

There’s a lot that goes into owning a chameleon. And you need to make sure that you follow basic chameleon care guidelines as close as possible.

Jackson’s chameleons eat a diet made strictly out of insects or small invertebrates. And they prefer them live. Insects are packed with specific proteins and nutrients that they need to stay healthy. Some great insects to feed them include:

You can even add more nutrition to these insects through the use of special supplements to the prey. A good rule of thumb to follow when feeding your chameleon is to not feed them anything larger than the space between their eyes. And only give them around six insects per feeding.

Chameleons don’t need as much exercise as most other animals. They’re pretty content just hanging out on their tree branches. However, you will see them get most active at feeding time when they are hunting down their prey. Other than that, simply climbing the tree branches should provide more than enough exercise for your little guy.

Jackson’s chameleons are built for extremely humid environments. In their native homes, rainfall can average anywhere between 30-60 inches with 80% humidity year-round. This can be a very difficult atmosphere to recreate. You’ll need to employ the use of misters and humidifiers to ensure that your chameleon stays healthy.

That being said, your setup may actually account for the majority of your chameleon’s water intake. They don’t necessarily need to hydrate in the traditional sense with a bowl of water. They’ll drink off the dew and moisture from the vegetation in their habitats.

This can be accomplished through special heat and UV lamps. However, exposure to natural sunlight is specifically important to Jackson’s chameleons because they birth live young. You’ll need to set up a system to allow them to get at least a few hours of natural sunlight a week. But again you need to watch them closely. If you start noticing them panting or changing very light in color, they may be experiencing heat stress.

Jackson’s chameleons are very sensitive creatures. And there are many different illnesses that can plague them. As a matter of fact, before you decide to raise a chameleon, you should locate a reptile vet in your area because you will need to visit them often. Your pet should have bi-yearly checkups and regular blood and fecal tests. These tests will help to clear your chameleon of commonly contracted parasites and disease.

One of the biggest causes of illnesses for chameleons is stress. Jackson’s chameleons are easily stressed out due to a number of reasons. They refer to remain completely alone, so putting another chameleon in their habitat can cause stress-related problems for both. They even stress out over their own reflections because they think there’s another chameleon. So keep mirrors and other reflective surfaces away from their cages. Stress can also be brought on by excessive movement or noise around their habitats. Noisy children, barking dogs, or even loud music can stress out your chameleon at a moment’s notice.

You should also be on the lookout for upper respiratory infections. These are relatively common but easily cleared up. The most common cause of this is an unclean environment. You need to ensure that your chameleon’s habitat is as clean as it can be at all times. Some warning signs of an upper respiratory infection are a gaping mouth, bubbling around mouth and nose, excessive mucus, and wheezing.

Jackson’s chameleons — like other chameleons — are extremely susceptible to gout and kidney failure. This is most commonly brought on by dehydration issues. That’s why it’s super important to be vigilant when regulating the humidity and hydration levels of your chameleon and their habitat.

One of the top causes of chameleon death and injuries is metabolic bone disease. This is another issue that you, as the owner, are directly responsible for preventing. Chameleons need around 12 hours of UV-B light every single day. This helps them to properly process the calcium from their food needed for healthy bone growth. The most common source of UV light is from the sun. However, most of us can’t spend 12 hours every day out in the sun watching our chameleons. That’s why you’ll need to ensure you have UV lamps and timers set up in their cages.

Sexing male and female Jackson’s chameleons is probably the easy part about them. The males have the three large protruding horns and they’re often larger than the females. Females will also exhibit bright green colors like the male, but more intricate color patterns are normally found on male chameleons.

Males are also a bit hardier and less prone to illness, but they usually have a more unpleasant temperament — especially if there’s another male chameleon around.

Jackson’s chameleons are beautiful, wondrous creatures that are amazing to behold and observe. But as far as active pets go, you’ll need to look some place else. They are not for casual pet owners. You should only take on a chameleon if you are a very experienced reptile pet owner. They require tons of special care and constant monitoring to survive.

However, if you are a very experienced reptile owner, with the necessary means, a chameleon could be a great (yet challenging) addition to your home.