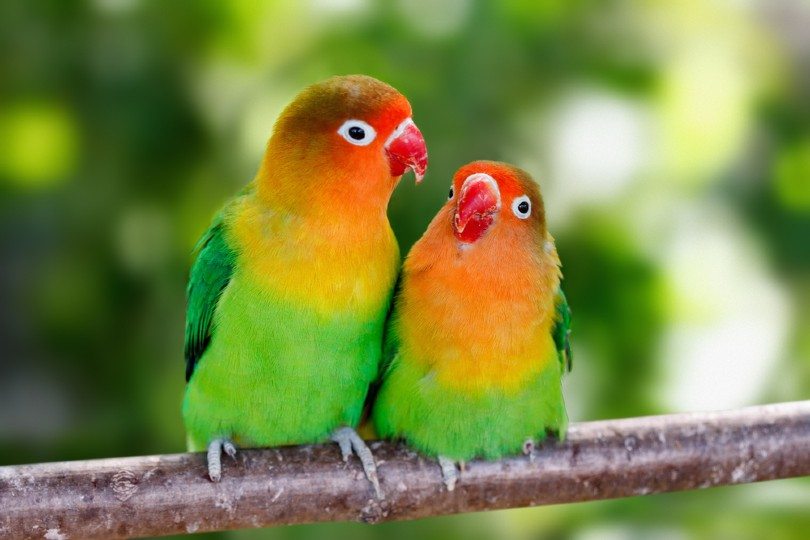 Lovebirds are adorable birds to keep as pets since they are cuddly, just as their name suggests. These little “pocket parrots” are colorful additions to a family and a relatively low-maintenance bird for beginner owners.

All of the lovebird species that we have found call the continent of Africa their home. Lovebirds tend to live in small flocks in the wild. They are all part of the Agapornis family and are closely related.

There are only three lovebird species that are commonly kept in captivity. These include the Rosy-Faced Lovebird, Fischer’s Lovebird, and the Black Masked Lovebirds. Many lovebird species have two or more common names, making it easier to refer to them by their scientific names in general conversation.

In the wild, some lovebird populations are becoming a cause for concern. These include the Nyasa, Fischer’s, and Black-Cheeked Lovebirds. They are not on the endangered species list yet, but they all fall into “threatened” and “vulnerable” categories.

In captivity, these birds are thriving. They are some of the most popular bird species to own as pets since they are so active and exciting. They have curious personalities and remain forever playful and social. They often form intense bonds with their owners and are known to be affectionate birds.

These lovebirds are the most common lovebird species to own as a pet. Their beautiful plumage and cute faces are what most of us picture when we think of a lovebird. They are relatively easy to care for as well but can get aggressive at times. It is best to be careful with them when you first begin your interactions.

The common names for lovebirds often describe their appearance, and this one is no different. They have rosy pink faces and throats. They tend to have a darker orange or red shade above their eyes and on their forehead.

The plumage across the majority of their body is dark green, fading into a black rump. Their feet and legs are grey. These beautiful birds typically have dark brown or black eyes with a horn-colored beak.

The Rosy-Faced Lovebird is native to dry areas within Southwest Africa. They are not picky with their surroundings and will live in open countrysides, woodlands, mountains, and even semi-desert regions near water sources.

This species of the lovebird is cute and relatively small. They total about 7-8 inches from head to tail tip and only weigh just under 2 ounces.

This lovebird has two common names since there isn’t a significant agreement regarding which of their features are more prominent, the black masking on their face or the bright yellow collar underneath. They are another common pet species and are a bit easier to own since they tend to be less aggressive than Rosy-Faced Lovebirds.

Starting from the top, these birds have a black head that looks like a mask around their eyes and beak. The mask feature is made even more prominent by the white rings around their black or deep brown eyes. Their beaks are also brilliant in a bright, stand-out red.

Underneath all of this is a collar of bright yellow fading quickly into a green that runs the length of their bodies. Sometimes their wings or tails can have blue accents. Their feet and legs are grey.

The Black-Masked Lovebird is not as widespread as the Rosy-Faced Lovebird. They are native only to the northeast of Tanzania. However, their subspecies have been introduced into Kenya and Burundi with some success.

Males are slightly larger than females in this species. However, the birds still won’t weigh over 1.75 ounces and are often even smaller than Rosy-Faced Lovebirds, coming in at a maximum of about 2.3 inches.

Fischer’s Lovebirds are the last of the common pet species, but they stand out from the crowd with their brilliant and highly varied plumage colors. They are popular because of their extremely playful nature, but they tend to be quieter than other parrot or lovebird species. They are energetic and social and are often very good at bonding.

The Fischer’s Lovebird is primarily covered in vibrant green-blue plumage with slight color changes across the chest, wings, and back. This color fades into a golden yellow on their neck and steadily turns orange and brown on the tops of their heads. They have dark orange beaks and rings of white around their eyes.

These birds are only native to Africa’s small region along Lake Victoria’s southern belt in Tanzania. Climate change has caused some of them to migrate to Rwanda and Burundi.

These are among the smallest lovebird species, only reaching about 5 inches from head to tail and weighing between 1.5-2 ounces.

The Nyasa Lovebird appears relatively similar to Fischer’s Lovebird but with much more gentle colors. The front of their faces and the top of their head is a rosy red or orange shade. This fades into light orange and then yellow down their heads and on their chest. The rest of their body is a bright green, with some blue tints on the wings. They have a white ring around their black eyes and a bright orange beak.

These birds have a wider native region but far fewer and smaller flocks. They live in areas of Malawi, Mozambique, Tanzania, Zambia, and Zimbabwe.

These little lovebirds come to a whopping maximum of 5.4 inches from the top of their heads to their tails. They have less mass than other species, weighing between 1-1.3 ounces.

The Black-Cheeked Lovebird is not to be confused with the Black-Masked Lovebird. They were initially thought to be a subspecies of the Nyasa Lovebird but have since been recognized as an individual species.

These birds are primarily covered in dark green plumage on their wings and lime green on their underside. This fades into a light brown on their chest and then into an orange. The top of their head and around the beak is a dark brown with white circles around their eyes. They have bright red beaks.

Black-Cheeked Lovebirds are native to southwestern Zambia. Some of them have been spotted in Zimbabwe, Namibia, and Botswana as they migrate for water sources.

These birds average 5.5 inches in length and weigh about 1.4 ounces at their heaviest.

The Abyssinian Lovebird has quite a different appearance compared to the other lovebird species featured above. They are rare to find anywhere, although they have been gaining some popularity as pets again throughout recent years.

These birds have a bright red beak and head and do not have rings around their eyes. From the top of their head to the bottom of their tail, they are vibrant shades of green. The only exception is their black underwing. Sometimes, females are entirely green without any shades of black or red on their bodies.

The Abyssinian Lovebirds are native to the mountainous regions of Ethiopia and Eritrea.

These birds usually are larger than the other species of lovebirds. They are normally 6-7 inches long and weigh an average of 1.7 ounces.

The Madagascar Lovebird is native to Madagascar and can be found on some neighboring islands as well. They are not currently kept in captivity.

Males and females have different color patterns in this lovebird species. Females are entirely covered in green plumage with some darker shades on their wings and along their back. Sometimes it is paler on their chest.

These birds are native to the island of Madagascar and live within a rainforest environment since they need plenty of water to survive. They can also be found on some neighboring islands.

Madagascar Lovebirds are the smallest of all of the lovebird species and measure 5 inches or less in length and weigh between 1-1.25 ounces.

Red-faced Lovebirds are beautiful and have an attractive demeanor. This combination has resulted in many attempts to breed them in captivity, all of which have been met with failure. They have particular needs that only their native environment can satisfy in nesting, companionship, and diet.

Red-faced Lovebirds have stunning green plumage all over their bodies, tails, and necks. Their only color difference appears on the front of their faces, forehead, and beak. This color is normally a peachy-orange.

The Red-Faced Lovebirds have the largest native area. They can be found throughout all of the tropical rainforests of Africa that run along the equator. The countries they show up in include Uganda, Sierra Leone, Angola, and Liberia.

They are about 6 inches long when they reach full maturity, and they normally weigh around 1.5 ounces.

The Black-Collared Lovebird is another scarce species. They are not kept in captivity since they have a specific requirement for native figs in their diet. They are also quite shy of all creatures and are typically spotted very high in the trees they call their home.

These birds only have a few markings on their body to set them apart since they are primarily covered with green plumage. Otherwise, they have a distinctive black collar around the back of their neck.

These birds also have a large range of land that they can potentially call home. This includes the rainforests of Africa, similar to the species featured above. You find them in the Republic of Congo, Cameroon, Côte d’Ivoire, Equatorial Guinea, Gabon, Ghana, Central African Republic, Uganda, and Libera.

This species is average for lovebirds, being about 5 inches long from top to tail and weighing around 1.4 ounces.