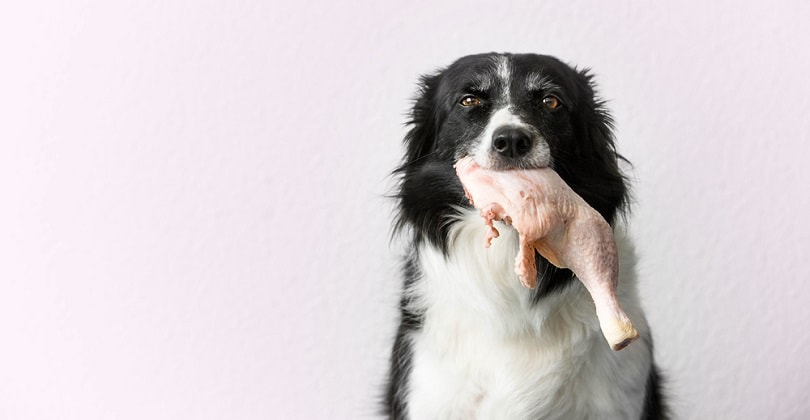 When working at the kitchen counter preparing a meal for the day, those who have dogs will be familiar with having a shadow. They sit there with their puppy dog eyes, just waiting and watching for something to drop their way. Most of us can’t help but throw them a bit of whatever we are cooking at the time.

Although our dogs might look like they want what we have more than anything, it doesn’t mean that they should get it. Our digestive systems work differently from theirs. We humans enjoy many things that they can’t digest or that are toxic for them.

When you have a dog and know that there is a chance that you will share some of your food with them, it is essential to understand what they should and shouldn’t eat.

In this article, we go over the most common human foods that your dog shouldn’t eat and why it is dangerous for them.

Dogs are animals that don’t need much more than meat in their diet. They can glean some beneficial nutrients from fruits and vegetables, though. You need to be selective about what you feed them and take special care to ensure that the food isn’t dangerous.

At the end of a long day, a beer or a glass of wine can go a long way. However, alcoholic beverages and food containing even traces of alcohol can be incredibly damaging for your dog. It can cause vomiting and diarrhea.

Like humans, it will induce depression in the central nervous system and even cause difficulty breathing, tremors, coma, and even death. Their body is simply not meant to digest alcohol. If your pet has ingested any alcohol, contact the Animal Poison Control Center or your veterinarian immediately.

Avocados might be a superfood for us humans, but it doesn’t usually sit well with dogs. They don’t have as much of a problem with it as horses and birds will, but it is still hard for them to digest. In large quantities, it can cause cardiovascular issues.

We can’t give bones to dogs? But what about all of those bones sold by pet stores across the country? Have we been giving our pups dangerous food this whole time?

No, not necessarily. Bones that come straight from animals and have been cooked are different from bones processed by pet food companies. You can still give your dog bones from something like livestock, but you shouldn’t ever give them bird bones because these will splinter. You shouldn’t give them cooked bones because these can also splinter and get stuck in their throat.

We might live off of coffee but our dogs shouldn’t. Caffeine contains a compound called methylxanthines. When ingested by your dog, it can cause vomiting and diarrhea, excessive thirst, urination, panting, hyperactivity, tremors, seizures, and even death. That just means you get to keep your coffee all to yourself.

Sugar is essentially unneeded and dangerous in your dog’s diet. There might be times when you can let them try a small piece of something sugary, but even a little too much can cause adverse reactions. The sugars and preservatives in candy can cause hyperactivity and increased heart rate. If they overeat, it can eventually cause diabetes and unhealthy amounts of weight gain.

Chocolate falls under both categories of candy and coffee because the cacao seed used to make chocolate also contains methylxanthines. Chocolate is incredibly toxic for dogs, and they should never get to indulge in this tasty treat. Dark chocolate is the most dangerous because it contains the highest percentage of cacao, along with baking chocolate. Even white chocolate, which has the lowest level of methylxanthines, shouldn’t be fed to your dog.

You might have seen the videos of someone trying to feed their dog a lemon. While funny and entertaining, it is not the best choice for the continued health of your pup. Citrus fruits contain citric acid. These essential oils cause irritation and even some swelling in your dog’s mouth and throat.

If they overeat any part of a citrus plant, it can cause depression in their central nervous system. They have to eat large helpings of citrus fruit for this to happen, though. It is unlikely to give them any problems in small doses beyond an upset stomach.

Coconut is not one that you have to be inordinately careful with, unlike chocolate or coffee. Coconut and its products, such as coconut oil, shouldn’t harm your pet in small amounts. The fresh milk from a coconut can sometimes cause loose stool and diarrhea. It is best to use caution when offering anything with coconut to your dog.

Grapes and raisins are quite toxic for dogs. Scientists have yet to figure out what compound inside of grapes causes the reaction. However, if your dog eats grapes or raisins, it can cause kidney failure even in smaller amounts.

Do you ever crave a taste of Hawaii’s tropical shores? A macadamia nut might be a tasty, textural treat for us, but they are practically poison for a dog. They cause weakness in the limbs, vomiting, depression, tremors, and even hyperthermia. These signs will typically manifest within 12 hours of them eating the nut but won’t usually last for more than 48 hours.

Animals like dogs and cats cannot break down significant quantities of lactose. They don’t have the enzyme lactase that allows them to digest the protein properly. That often results in diarrhea and vomiting. You should avoid giving your dog cheese, dairy-based sauces, and milk.

You shouldn’t give your dog any kind of nut. Note that this doesn’t include peanuts because they are a legume and not a nut.

Nuts such as almonds, pecans, and walnuts all add to pancreatitis if they eat them too often. They contain high amounts of fats and oils, both of which commonly cause vomiting and diarrhea.

Any plant within the general Allium family can cause gastrointestinal irritation. Over time, it can lead to damage in the red blood cells and eventually anemia. Cats are even more sensitive to the damaging effects of veggies like onions, chives, and garlic. If they overeat, dogs can also become quite ill.

You might think that because your dog’s ancestors, the mighty wolves, were able to attack and eat almost any animal raw, that raw meat shouldn’t be a problem. However, over time, dogs have evolved, and many of the processes that allow them to eat raw foods disappeared.

Raw meat and eggs might contain bacteria like salmonella and E. coli. These can quickly wreak havoc on your dog’s digestive system. Raw eggs also have an enzyme called avidin. This enzyme lowers your pet’s ability to absorb biotin. Eventually, that leads to skin and coat issues.

Many of our snacks nowadays are loaded with salt. However, a large amount of salt is not a healthy thing for your dog to ingest. It leads to excessive thirst and urination, much like in humans.

Too much of the sodium ion in your dog’s system eventually leads to poisoning your pet. Symptoms include diarrhea, vomiting, depression, an elevated body temperature, tremors, and even death. Avoid feeding dogs pretzels, potato chips, or salty popcorn.

Xylitol is a sweetener that can either be synthetic or natural. We use it in all kinds of products to make them taste better. That includes baked goods, candy, gum, and even toothpaste. Unfortunately for our pets, it causes an unhealthy release of insulin, leading to liver failure if they ingest too much. It can also develop into hypoglycemia if steadily consumed over time.

If your dog reactions to it violently right away, it will look like vomiting, loss of coordination, and lethargy. The symptoms might progress to seizures as well. If you notice any of these, bring them to the vet immediately.

Yeast dough in your dog’s system can cause uncomfortable amounts of gas and pressure. It can cause bloating, which can be a life-threatening emergency if it causes the intestines to twist. Your dog should never ingest raw bread dough or bread raised using yeast.