Chinchillas make great pets, as they’re incredibly cute, have engaging personalities, and are fairly low maintenance. That doesn’t mean you don’t have to make any difficult decisions regarding their care, however.

One such decision is which bedding to use. You certainly don’t lack options, as any pet store is full of different products. It can be intimidating to try to figure out what kind of bedding is best, and bringing home the wrong kind could cause a huge mess in your house (not to mention possibly causing health issues for your rodent).

We took a peek at the most popular beddings on the market today, and in the reviews below, we’ll show you which ones are worthy of your pet.

A Quick Comparison of Our Favorites

The 10 Best Bedding for Chinchillas — Reviews 2020 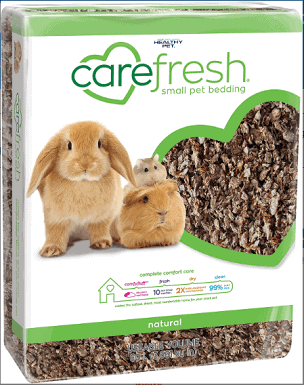 Made of reclaimed paper fiber, Carefresh is extremely absorbent, so you shouldn’t have any sopping, disgusting messes on your hands (provided you change it regularly, of course). It soaks up ammonia odors as well, keeping the cage (and your home) smelling fresh and clean.

It’s also easy to dispose of because it’s completely biodegradable. You can also compost it if you feel the need, making it one of the most eco-friendly options on the market.

Perhaps the best thing about it, though, is the fact that it’s nearly dust-free. You can play with your chinchilla or clean their cage without suffering a coughing fit in the process, and it’s perfect for animal lovers with respiratory problems.

It does have a rough texture, and while chinchillas don’t seem to mind it, we wonder if it’s as comfortable as other options. Regardless, we figure that pets would rather lie down on dry, clean bedding than having to soak in their own urine, which is why the incredibly absorbent Carefresh takes our top spot here.

Kaytee Clean & Cozy is another paper-based product, so it’s gentle on the environment and you don’t have to worry about much dust.

Despite being similar to the Carefresh option in our top spot, this paper product is considerably cheaper, making it a great budget option (and in fact, it’s our choice for best bedding for chinchillas for the money).

Because it’s relatively inexpensive, you can buy it in bulk without putting yourself in too deep of a financial hole. This allows you to put quite a bit in your chinchilla’s cage, ensuring that they’re well-insulated from soiled paper.

It’s not quite as high-quality as our number-one pick, however, and that’s largely because it generates a bit more mess. Don’t get us wrong — it’s still cleaner than most non-paper options, but you’ll deal with more dust than you would with Carefresh.

As you can probably tell, we’re big on using paper bedding, and Vitakraft Fresh World is another of our favorites.

It comes in little crumbles, almost like kitty litter, and this makes it much easier to clean than many other options. It clumps to control messes so they don’t spread throughout the cage, and those clumps are easy to see, so you won’t have any accidents lingering for longer than they should.

The crumbles soak up moisture well, so even once they clump, there’s little need to worry about your chinchilla getting mud all over their paws.

It has a special odor-blocker formula that does an excellent job of containing smells. It claims to be able to keep odors at bay for up to two weeks, but we don’t recommend pushing it.

You’ll pay a little more for all of this, as this isn’t one of the cheaper beddings on the market. Also, if any gets out of the cage, expect to spend time picking it up, because this stuff gets everywhere.

Vitakraft Fresh World is one of the best beddings we found — we just don’t feel like there’s enough difference between it and the two ranked above it to justify the additional price.

Our first non-recycled paper option, Living World Aspen Shavings are made of small bits of wood. The shavings don’t have any aromatic oils or other additives, but they do have a strong wood odor that some users may find off-putting.

It has a light, almost fluffy consistency, and many pets love to spend hours burrowing through it. It certainly seems softer than many of its rivals, anyway. It’s also cheap to boot.

It does a good job of soaking up messes, and it’s also capable of harnessing odors.

These shavings certainly aren’t dust-free, though, so if you have breathing issues, you might want to go with something less messy.

Living World Aspen Shavings isn’t a perfect bedding, but there aren’t many that are better for the price, making it a solid choice for this spot.

Oxbow Pure Comfort is made of paper that’s never been printed on, so you don’t have to worry about any residual ink seeping through. Of course, that also means your chinchilla won’t have anything to read while they do their business, but we suppose that’s a small price to pay.

This stuff is lightweight and incredibly absorbent, and the manufacturer claims it can soak up 800% of its weight in moisture. We’ll have to take their word for it, as we didn’t measure it ourselves, but it’s definitely capable of soaking up big messes.

It’s quite dusty, though, which is surprising for a paper bedding. You’ll definitely want to keep a broom and dustpan handy when cleaning out the cage, and users with respiratory issues may want to avoid it entirely.

Also, while it can absorb a great deal of urine, it stays wet once it does. You’ll have to remove the soiled paper quickly, or else your chinchilla can easily track pee all over the place.

Oxbow Pure Comfort is a good bedding, but we’d like to see them make a few tweaks to it before we could consider ranking it higher on this list. 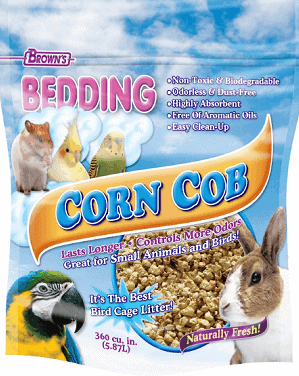 Brown’s Naturally Fresh! is a corn cob bedding, and as such, it’s biodegradable. You can flush it, as it’s safe for most septic systems, or you can throw it in the composter, if you have one.

It’s heavy, so it shouldn’t fly out as your little buddy digs around in her cage, and it’s easy to scoop up when soiled. However, it’s there that the well of positives runs dry.

It does little to control smells, so you’ll have to clean the cage religiously or learn to enjoy rodent odors. It’s also quite rough, and your chinchilla may not find it as fun to burrow in as some other options.

Worst of all, though, it can promote mold growth, which is harmful to both you and your pet. You have to monitor it regularly and be prepared to throw the whole pan out and start over if you spot any fungus.

As a result, it’s hard to recommend Brown’s Naturally Fresh! too enthusiastically. 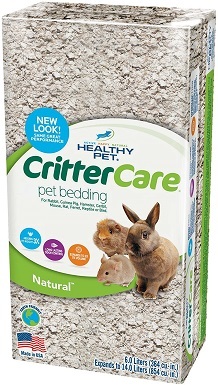 While Healthy Pet Natural isn’t much to look at, that’s part of its appeal, as it has no dyes or other artificial colorings in it. That makes it healthier for your chinchilla, as well as allowing you to compost it if you like.

There’s quite a bit of fluff to it, so your pet should be able to burrow down deep without much issue. It’s also lightweight enough that it shouldn’t be too overbearing if they do.

However, while it’s fluffy, it’s not really soft. In fact, it’s kind of scratchy, and some animals may not want to have anything to do with it.

It’s extremely dusty and does little to neutralize odors. There’s also not much in the bag, despite the relatively high price, so you don’t get much value for your money.

It’s admirable that Healthy Pet Natural foregoes may artificial ingredients, but that’s not enough to justify ranking it higher here. 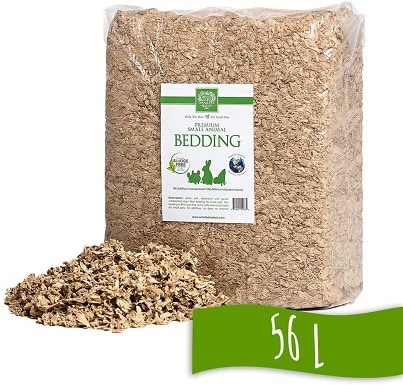 Small Pet Select Natural is made of unbleached paper, giving your little buddy a safe place to lay her head. It expands up to three times its size once it’s out of the package, so there’s more in each bag than you’d think.

If you’re worried about planetary impact, this stuff is made of leftover wood, so no trees had to die so that your pet would have a place to use the bathroom.

However, it’s likely less healthy for your chinchilla than it is for the Earth. Once it gets wet, it will likely stick to their fur, which is obviously unsanitary. It can also promote mold growth if not changed religiously.

It does next to nothing to stop odors, and fecal material tends to sit on top of it rather than getting mixed in with it. That increases the chances that your pet will get poop all over themselves, which they may then track all over your house.

Small Pet Select Natural is an eco-friendly bedding, so it can help keep the planet clean, but don’t be surprised if it ends up making a huge mess in your house. 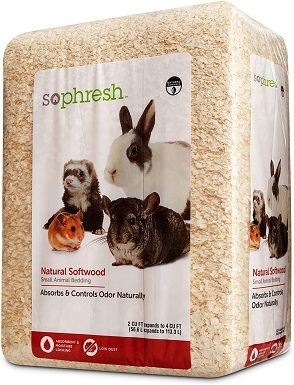 There’s a mixture of wood types in each bag of So Phresh Natural, as it’s a combination of spruce, fir, and pine shavings. All the wood is free from aromatic oils, so it’s scent-free, making it suitable for those with sensitive noses.

The shavings are so thinly sliced that they do almost nothing to sop up moisture, however. Urine spreads throughout the cage quickly, and you’ll need to replace the bedding much more frequently than you’re likely used to.

You’ll have to completely stuff your cage with this bedding to have any hope of controlling messes, but that obviously gets expensive quickly.

There are sharp pieces mixed in as well, which could prove hazardous for your rodent (not to mention your fingers). All in all, it doesn’t seem like it provides a comfortable spot to lay down.

We had high hopes for So Phresh Natural, given the mix of woods it used, but those hopes were quickly dashed by its inferior absorbency. 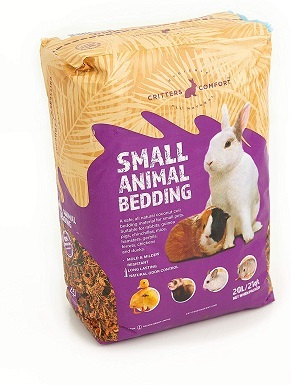 Made from coconut coir, which is the fiber on the husk of the coconut, Critters Comfort Odor Control is different from many other beddings. Unfortunately, that’s not really a good thing.

The thing about coconut coir is that once you break it up, it essentially turns to dirt — and as it turns out, dirt gets messy. Expect to have dust all over the place when pouring it, and you’ll likely find a mess outside the cage due to digging. It sticks to fur too, and you’ll likely have issues with tracking.

However, it’s not really dirt. It’s fiber, which makes it worse for your lungs when you breathe it in. This is doubly so for your chinchilla, and it may lead to respiratory issues.

Fiber is also more expensive than dirt, so you’ll have to dig deeper into your wallet for each bag (and that’s before you have to pay for any vet bills).

It’s not all bad, though, as this stuff is truly sensational at containing odors. That’s not enough to recommend Critters Comfort Odor Control, but it may have some use if mixed in with other bedding.

Carefresh is our favorite chinchilla bedding, as it’s extremely absorbent, handles odors like a champ, and virtually dust-free. If you’re looking to spoil your little buddy, it’s a good place to start.

For a less expensive option, take a look at Kaytee Clean & Cozy. It’s eco-friendly and easy to keep clean, while also being gentle on your pocketbook.

Finding a suitable bedding is one of the most important decisions that a chinchilla owner can make, and we hope that these reviews have made it easier for you to find the perfect substrate for your furry friend.

After all, a high-quality bedding can help keep your chinchilla clean — and given how much you likely handle your adorable buddy, that ultimately translates to keeping you clean as well.