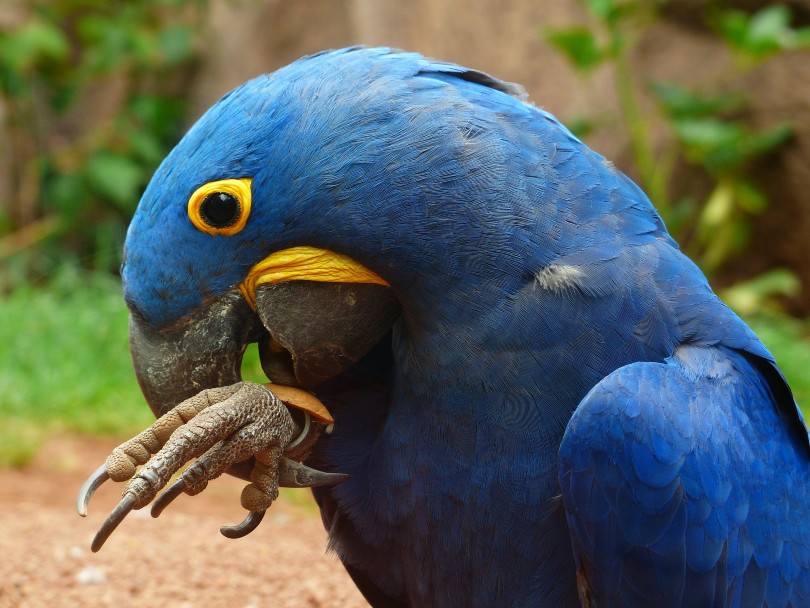 For those who love the color blue, these ten parrot species are a beautiful sight to behold. In this post, we’ll be highlighting 10 different exotic bird species that will have you wishing your pet was a little more colorful.

There are many reasons why people choose particular birds as their pets, and while some of them might be considered odd or unique, there’s something for everyone in the world of avian companionship.

Parrots come in all shapes and sizes, so if you’re on the market for one today, consider checking out any popular parrots below! All of these have at least one blue element on their bodies, and some are completely blue!

The 10 Types of Blue Parrot Species

A blue mutation of these normally green birds is somewhat rare in the wild, though many bird enthusiasts encourage this mutation to keep their numbers high. This beautiful blue color is fairly attractive and makes children want to play with them!

Despite being slightly more difficult to tame than green amazons, the yellow-naped Amazon tends to grow quite attached to owners who care for it regularly, so it’s worth considering.

Their diet consists of pellets, fruits, vegetables, and a variety of other treats that are perfect for these types of birds.

These parrots typically live between 40 to 50 years in captivity, so be prepared to give this pet lots of love throughout the years.

Also known as the blue-vented parrot, this is another popular option for people who love blue conures with a soft yellow hue to contrast with their dark feathers. They’re much shyer than the Amazon and much less bitey.

This bird has a lifespan of about 5-8 years, so they’re a little shorter-lived than their Amazon relatives.

They’re native to Australia and if you want one as a pet, be sure that it’s legal for you to own them in your area before purchasing. They also eat mostly fruit and are known to enjoy figs as well as other treats like pellets or nuts.

If you’re ever in Australia, keep an eye out for these birds in the wild as they’re not hard to find. They’re usually around anywhere between coastal areas, including Brisbane and Perth.

Hyacinths are one of the largest blue parrots in existence, and they’re incredibly rare, so it would be challenging for most to own them as pets. These large birds have a primary diet consisting of seeds and nuts, so you’ll need plenty of money on hand if you plan to keep one for a pet. These birds are not recommended for first-time bird keepers.

The Hyacinth Macaw’s plumage is a deep blue body with a light blue head and large, deep red eyes. It has orange cheek patches that contrast with its yellow beak.

On average, these birds reach about 28 inches in size. They’re found throughout most of the Amazon region and are also known for being great pets because they usually only bite when threatened or mishandled.

These birds have an average lifespan of 50 to 60 years in captivity, so they’re the type of pets you should consider adopting if you’re willing to make the necessary time and financial commitments.

They’ve been known to be very hard-headed as well, so make sure that you’re fully prepared to tackle your duties with patience and grace.

These birds are as friendly as they come and can be quite tame. Their red tail feathers are what sets them apart from other types of blue parrots. They’re very small birds, and they’re also relatively quiet, making them a lot of fun to own.

The Red-bellied Parakeet is a tiny, cuddly blue bird with bright orange cheeks and a red belly. It has a dark gray head and neck, while its chest is green with yellow around the wing area. The eyes have an orange ring around them, and it’s also got brownish-gray wings and tail feathers. They typically weigh between 115 and 175 grams.

They eat seeds, fruits, and veggies and are quite affordable as pets in general. They typically live between 12 to 20 years.

The average price for a red-bellied parakeet is less than $200, making it a more accessible option for anybody.

The blue-throated macaw is a powerful, large bird with a bright blue head and a gorgeous scarlet body. They’re more aggressive and have a mean bite, so it’s an option better suited for experienced bird owners. Your pet will be a very loud bird and will need plenty of attention in the form of flying time or other activities.

It’s one of the largest macaws, weighing from 0.5 pounds -1.5 pounds with a wingspan reaching around 4 feet. This bird is very curious by nature and it’s common for them to follow their owners around or stay perched on their shoulders.

These incredible birds typically live anywhere between 60 to 80 years! They’re known for being the intelligent type, so they’ll love to talk with you.  It can be trained to mimic sounds and will speak up when necessary.

This is a little parrot that makes a big, bright presence when you enter the room. Its body is mainly green, fading into blue towards the head area. While they aren’t known for their speech-mimicking abilities, they’re often bred in captivity for their beautiful colors.

The blue-crowned conure is a brightly colored parrot that has a dark eye and a light face. The light cheek patches contrast the dark eyes.

They typically live between 20 to 30 years in captivity, so they’re relatively short-lived parrots; however, you’ll definitely have lots of good memories with them during their lifetime.

The blue-crowned conure is a bird that can be described as being relatively talkative. They don’t sing, but they do squawk and make other loud noises.

A unique morph of this gorgeous Australian bird, dubbed the pale-headed, is entirely blue, with white streaks along its back and wings. Its head and neck are bright yellow, making this one unique-looking bird! They’re gentle and social by nature but can develop trust issues if handled too often.

Eastern Rosellas are beautiful, gentle birds that are perfect for novice bird owners. They’re not as loud as some of the larger species, and they’re not too demanding when it comes to diet or space. To keep an Eastern Rosella happy, you’ll need to spend time with them and make sure that they have a variety of fresh fruits and vegetables to eat at all times.

Eastern Rosellas need an average human lifetime of commitment from their owner to feel content and loved. They also need plenty of room with fresh air circulation and fresh fruit and vegetables to eat every day.

They can be a bit shy, so you must give them plenty of attention at first so that they grow accustomed to human companionship.

It’s a good idea to get them used to someone handling them before getting one for your home. Early socialization helps them develop positive bonds with others and become the happy, friendly birds they are.

They typically live about 20 to 30 years in captivity.

This parrot is the smallest of the birds on this list, but it’s quite adorable with its gray-blue body and bright orange belly and beak. They’ve been bred in captivity, so most are very tame, and they’re very playful.

They’re about six inches in length and weigh less than an ounce, so you’ll need a delicate touch when handling them. If you have small children, it’s best to keep them away or supervise them closely, as children rarely know the extent of their own strength.

If uncrushed, Pacific parrotlets typically live between 12 to 20 years, but some have lived up to 30 years in captivity. They are ideal to be kept as pets because they don’t require large cages, and they’re also very low-maintenance.

The blue-winged parrotlet is a beautiful bird with an all-over green body and blue wings, as the name suggests. They typically live up to 20 years in captivity.

The blue-winged parrotlet is a popular pet because it’s gentle, friendly, and playful. They will enjoy your company immensely, and you will feel the love. As a pet, you may feed your bird grain, fruit, and greens like lettuce, spinach, broccoli, and the occasional treat of chopped nuts or seeds.

You can keep your blue-winged parrotlet in a small cage; however, they aren’t known for being escape artists, so you won’t need to spend thousands on keeping them securely in a large cage.

The military macaw is not only one of the larger parrots on this list, but it’s also one most beautiful imaginable with blue wings that shine when they extend. While they can be very gentle at times, they’re known to have a very strong bite and are not recommended to be kept by people that aren’t experienced with handling large birds.

They’re generally good-natured, though, and enjoy the company of their owners, which makes them great for families. Military macaws are smart enough to learn their names and conversational words, so it’s fun teaching them how to respond to a few key phrases.

They live between 30 to 60 years in captivity, so they’ll be part of your family for a long time.

The military macaw is not an ideal pet for people with limited space; however, you can keep them in a much smaller cage than you would think because they have a smaller body that allows them to be able to fly easily.

If you’re looking for a beautiful, loving bird that’s sure to entertain your family and friends, then consider one of the blue parrots on this list. Parrots are great pets because they’re relatively low maintenance and have a long lifespan. They’ll be a part of your family for many years to come!

We have pages for many conures on our blog, hosting all the information you’ll need when bringing one home. Remember, a healthy pet is a happy pet!

You may want to read next: