15 Cat Breeds that Look Like Lions and Tigers (with Pictures) 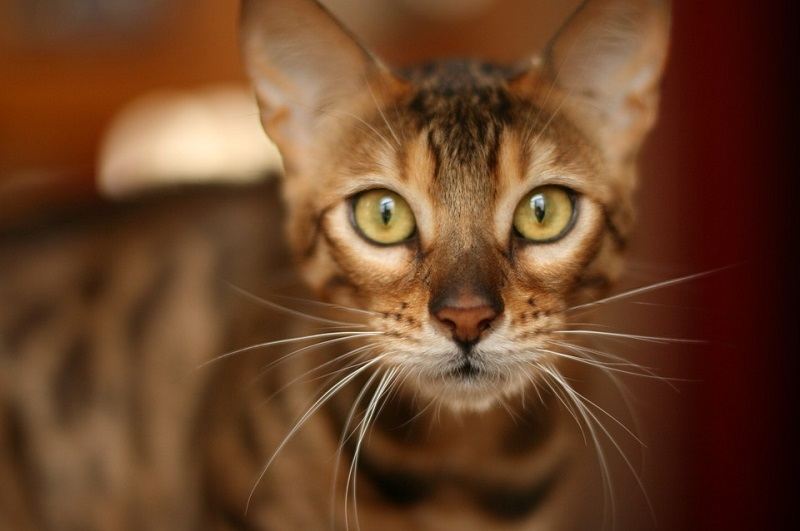 Have you ever fancied having a “big cats” as a pet? Well, unfortunately, that will never happen. The closest you will ever get to the big cat family will be to get yourself a cat. There is an uncanny resemblance between felines and their huge, strong, and fanged cousins. In fact, historical records have it that cats were wild animals that were first domesticated more than 4,000 years ago in Ancient Egypt to help control rodents—a job they do even today. From there, they became popular in Europe, Asia, and Africa.

Had it not been for ethical issues and the risks involved in domesticating lions and tigers, some of you cat enthusiasts would have actualized the idea of domesticating them.

Let’s have a look at the cat breeds that will connect you to your unachievable fantasy.

The 15 Cat Breeds that Look Like Lions and Tigers

As the name suggests, it is a small domesticated version of a tiger. It was bred by propagating Bengals with stripped shorthaired tabby felines to achieve the patterns and stripes in a tiger’s body. They are a mix of orange and brown, while the belly area may be whitish-brown.

It is also powerful, muscular, has large paws and sturdy hind legs just like a cat. Toygers are intelligent, outgoing, and they don’t need much exercise.

This cat has a plush coat that mimics a lion perfectly. Its large size earned it the nickname “gentle giant,” which explains why it is a preferred therapy animal. The thick coat also makes it well-adapted to winter.

Keeping an Abyssinian breed is the closest you can ever get to living with a lion. This cat breed is among the oldest on Earth. The most common types are in ruddy or red shades, but they appear in different coat colors. All cats in this category also have tabby ticking.

Other than the unusual coat, these beautiful felines boast of stunning physical attributes like gold or green eyes and a muscular body.

Chausie is definitely a mountain lion or puma’s cousin. It is a hybrid of the jungle cat and domesticated cats like the Oriental and the Abyssinian. They are very muscular, well-built, and have long legs. You cannot help but notice the “wild look” in them. They also like water, a hereditary habit from their ancestors.

Regardless of the close physical attributes it has inherited, Chausie is affectionate and playful. However, it needs extra care and would not be a good fit for the average low-budget cat owner.

One look at the American Bobtail will remind you of the North American wild bobcats. Their similarities are due to the breeding between feral cats and several bobtails’ mutations, but not the real bobcats. They appear in numerous colors but what makes them stand out is the tabby versions.

They have short tails, longer hind legs, and a muscular body.

This fancy-named feline is the most appropriate for someone who wishes they could share space with a cheetah. It is a hybrid of Ocicats and Bengals. All these three breeds trace their roots from the Asian Leopard Cat, explaining their similarity to the cheetah family.

It is athletic, loving, and brilliant. However, you should only consider owning a Cheetoh if you can match its insatiable need for attention and need for exercise. Being engaged keeps them happy. Since they are intelligent, you can easily get them on the leash and let them accompany you when you go out. The brighter side is that you will always have a companion and a playmate.

For the fellows who love the small wild jungle cats, Ocicat will do the trick. They are a cross breed of Abyssinians, Siamese, and American Shorthair cats. Before bringing one home, ensure there is enough space and time to let it burn its high energy levels.

They appear in several base colors like blue, silver, ebony, and lavender. Ocicats have a muscular, athletic body and often bring out dogs’ personalities. They love being around people.

Bengals have strands of wild cats in them, explaining their similarities with the tiger.

It is a hybrid of the Asian Leopard Cat and other domesticated felines like the Abyssinian, Ocicat, and the Egyptian Mau.

If you can hardly find free time in your schedule, don’t pet this little sort of a tiger because they need a lot of attention and exercise to be happy. You will be thrilled at their level of intelligence.

Also known as the Highland Lynx, they are a product of the Desert Lynx and other cats. Their most outstanding physical features include their curled ears, bobbed tails, and the coats’ tabby patterns. They exist in several colors and usually tend to have a silly personality.

If you go for a Highlander, you will have to create time to train and play with it. Or do other fun stuff to keep them engaged.

The Serengeti looks like the African Serval. It is a hybrid of Bengals and Oriental cats. Like other hybrid cats, it is athletic and has a wild aura around it. They are usually silver, golden brown, or black, maintaining the stripped tabby patterns.

If you plan on having one around, dedicate a part of your house for a field track because Serengeti cats are athletic. They like jumping on anything, be it shelves, perches, or the cat tree.

They are the tallest domestic cats, an attribute that got them to the Guinness Book of Records. Their long, slender athlete bodies and spotted coat patterns make them look like small cheetahs. They often display some dog personalities, and they are equally intelligent and active. Savannah is a hybrid of the African Serval.

Their ideal home setup would be a place full of physical activities to help them exercise.

Egyptian Mau is the most stunning and natural of all the cat breeds. It is one of the oldest feline breeds and a descendant of the African Wild cat of Egypt. This cat is more linked to the leopard or cheetah family because its spots occur naturally, unlike the other types whose genetics have been improved through crossbreeding.

Their coats are silver, bronze, or smoke. The black patches complete their appearance to achieve a close resemblance to their wild cousins. The Egyptian Mau also has lithe, muscular bodies and shorter front legs, and longer hind ones.

The Somali qualifies for a long-haired Abyssinian. If you were gravitating towards the Abyssinian but wished it was longhaired, the Somali has you covered. These two breeds are similar in almost all attributes like personality, high energy drive, and intelligence. With the long furs, Somali looks like a shaggy lion or a fluffy fox.

Bombay cats were made to look like panthers specifically. They are a hybrid of Burmese cats and American shorthaired cats. These sleek cats may appear wild but are, on the contrary, affectionate and friendly. They also love being near people, so expect a Bombay to find your laps a comfortable place for naps.

Pixiebobs look like bobcats, are friendly, and seem to display dog-like characters. They are genetically close to the tabbies, are big, and stocky. They come in long and shorthaired coats, which are spotted, classic, or mackerel, resting on the brown base color.

We hope that by now, you have made peace with the fact that you can’t have a tiger or a lion as a pet, but a cat will suffice. Every time you consider the striking similarities between them, like the typical tabby markings, you will be contented that cats are descendants of lions and tigers.

One other striking revelation is that almost all the cats that look like lions, tigers, or other wild animals did not occur naturally but were instead aftermath of improved genes and crossbreeding.