Do Ferrets Get Along With Hamsters? Everything You Need to Know! 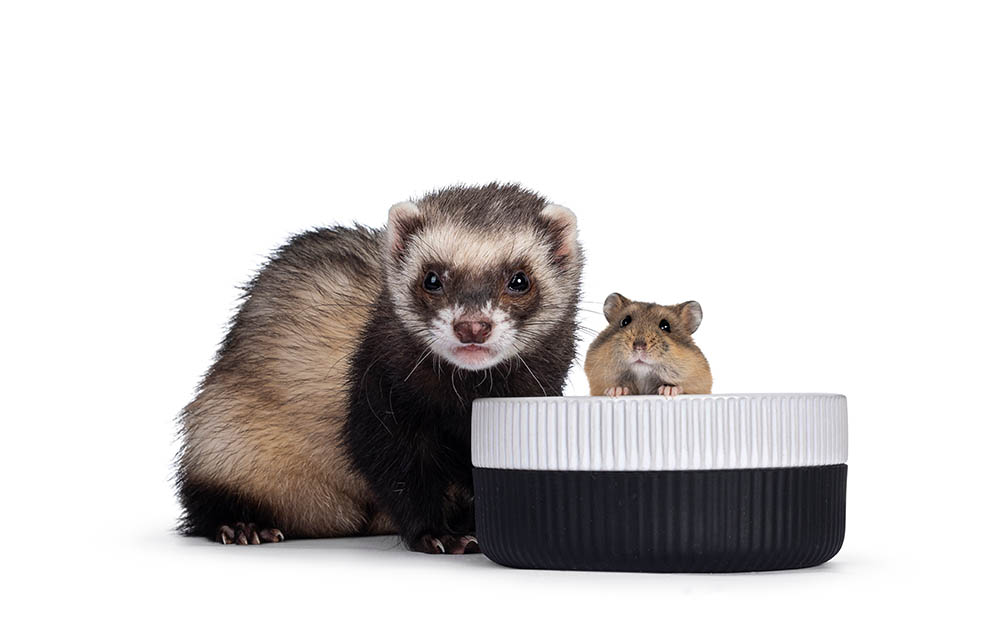 If you are thinking of transforming your home into a multi-pet household with a hamster and a ferret living together, think again. Even though they are both classified as small animals, ferrets and hamsters don’t get along and shouldn’t live under the same roof.

We’ll cover all the details below.

The reason why you shouldn’t let a ferret live with a hamster lies in their respective natures. In the wild, they would have a predator and prey relationship, which means one of them would be in grave danger. But, before we go into details about their connection, let’s find out more about both pets.

Hamsters are small animals that belong in the Rodentia order. That means they are rodents and have an omnivorous diet. They eat mostly seeds, vegetables, and grass, but they can eat an occasional insect too. Depending on the species, they can be both solitary animals and social animals that require company.

Ferrets are small animals from the Mustelidae family. They are characterized by their long body, short legs, and carnivorous diet. They eat meat like their distant cousins: weasels, stoats, and polecats, who also eat small animals. As pets, ferrets require mental and physical stimulation and human interaction.

Can Ferrets Live With Hamsters?

No, ferrets can’t live with hamsters because hamsters are in unending danger in this relationship. It is not possible to create a secure environment for a hamster if a ferret is around. Although hamsters aren’t part of the ferret’s natural diet, they are small animals that most predators (even cats and dogs) would consider prey.

Will a Ferret Kill a Hamster?

There is a big chance that a ferret will kill a hamster at first meeting simply because the hamster screams “prey” to the ferret. Ferrets have a high prey drive and they will react accordingly once their instincts kick in. You can’t do much to stop this behavior and that is why ferrets and hamsters don’t get along.

It doesn’t matter whether your ferret is the most relaxed ferret in the world, he will react because he is a predatory animal and it is in his blood to react. A fatal accident can happen in a second.

Will a Hamster Feel Threatened Around a Ferret?

Yes, a hamster will feel threatened around a ferret. Ferrets are predators and a hamster can sense the danger a ferret brings. Hamsters act like all small prey-like animals–which is what they are. They feel most relaxed when they are hidden somewhere away from danger. So, you can be sure that having a ferret around a hamster will elevate his daily stress.

Can Ferrets And Hamsters Live Under The Same Roof?

It is not a smart idea for ferrets and hamsters to share a household, but it is possible. But, before you decide on it, make sure you set some ground rules that will make both pets happy, safe, and stress-free.

If you want to keep your hamster happy and your ferret relaxed, both under the same roof, you have to make sure they don’t know the other one exists. The best way to do that is to keep them apart. We aren’t talking about them sharing the room with them in opposite corners. We are talking about each of them in a different room, using different toys, different bowls, different cages, different carriers, and every other accessory you can think of. You would even have to store accessories in separate rooms. That is important because both animals have a specific smell. So, if one pet picks up the scent of the other, they will know there is another living being in their environment that is either a threat or a treat.

A care schedule is a timetable you can follow to plan when you are handling your pets. This is important because you have to make sure a ferret doesn’t smell a hamster on you and vice versa. The best way to avoid that possibility is to change clothes when you are done with one pet and wash your hands thoroughly after every visit. Also, it is a good idea to have a small break between handling two animals so that the residual hamster/ferret scent can disappear around you.

If you have done everything to make them unaware of each other, you are almost done making this rather controversial cohabitation possible. The last thing you need to do is to make the hamster feel safe in his home. That means you have to make sure a ferret can’t enter a hamster cage under any circumstances. That doesn’t mean a ferret will enter the hamster room, but it is better to be safe now than feel sorry later. Take note of the following:

Ferrets and hamsters don’t get along and we strongly recommend keeping them apart at all times. They are polar opposites in diet, instincts, and behavior and it is best that those two pets never meet. By keeping them apart you are removing unnecessary stress from the hamster’s life and you are preventing your ferret’s instinctive reaction.