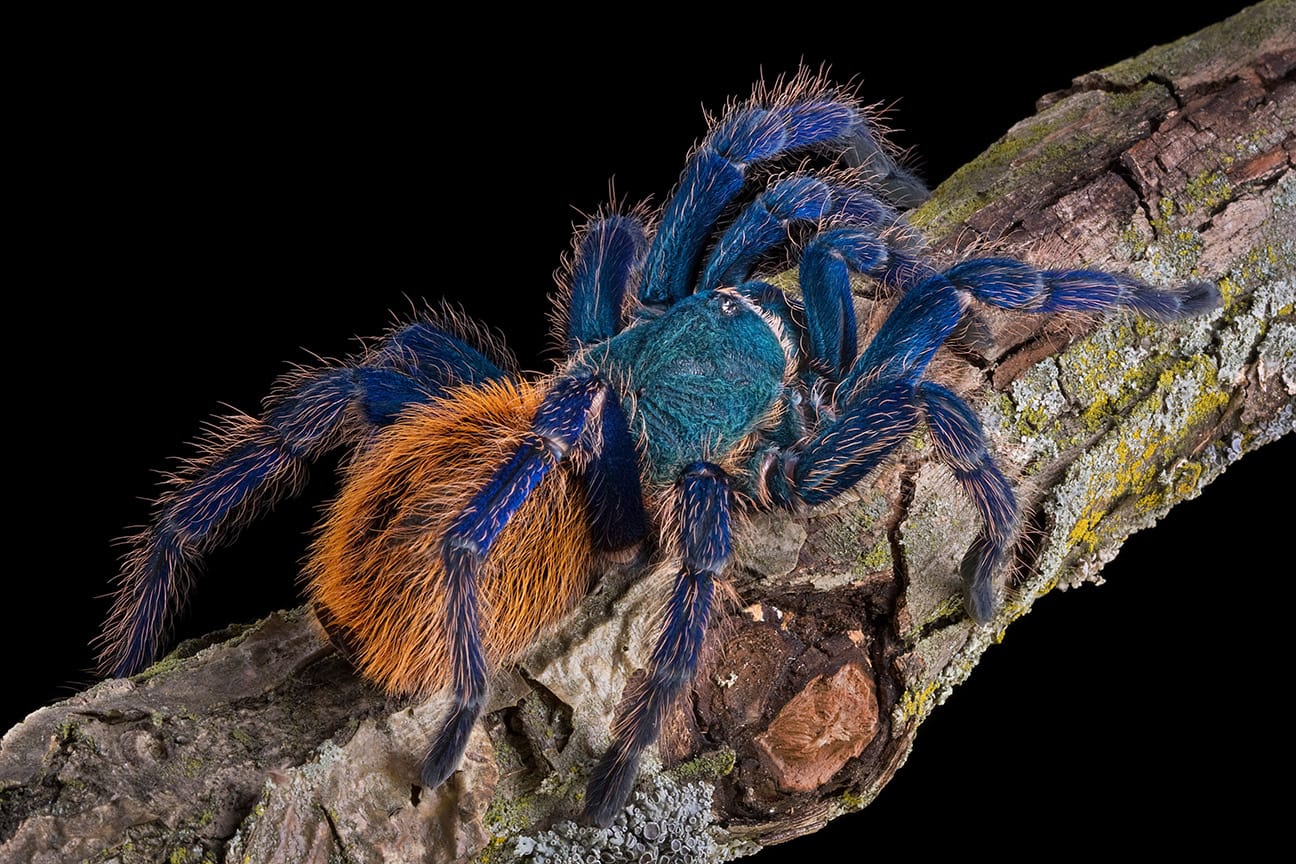 The Green Bottle Blue Tarantula is an attractive arachnid that is more colorful than many others of its type. That’s part of the reason for its popularity, particularly as species for new owners. It is a hardy pet that will make an excellent addition to a terrarium. The temperament of tarantulas varies with the species. They are typically hands-off pets.

The Green Bottle Blue Tarantula lives in the arid grasslands of northern Venezuela. It is an agreeable species, but it’s easy to frighten these spiders. They are energetic and won’t hesitate to bite if they feel threatened. You can tame them to the point where you can handle them. It’s worth noting that they are venomous to humans. It’ll feel like a nasty bee sting.

Its colorful body and active nature make the Green Bottle Blue Tarantula an excellent choice for beginners. It’s not overly defensive like some Old-World species. It does produce a great deal of webbing because it likes to be off the ground. In the wild, the webs provide a structure that allows these spiders to catch birds.

The species is relatively long-lived, with stark differences in lifespan between males and females. Maintenance is on the light side compared to other pets. Its setup is fairly straightforward. Daily cleaning of uneaten food and filling the water bowl are your main tasks. We recommend buying only from reputable dealers because of the ongoing illegal trade in tarantulas.

How Much Do Green Bottle Blue Tarantulas Cost?

The popularity of the Green Bottle Blue Tarantula can affect its availability and thus, its cost. Most available tarantula species run under $150. This one will likely be somewhere in the middle, around $60-$80. However, that’s just what you’ll pay for the animal. You also have to figure in other costs, such as an enclosure, substrate, and food. You must also have a hiding place, hygrometer, and water dish in the tank.

You can probably expect to pay around $100 or more the first year. Thereafter, your primary costs are food and maintenance, which will likely run at least $50 annually.

The Green Bottle Blue Tarantula is not aggressive, but it won’t hesitate to act either. We recommend not handling them because they are quite agile, which makes sense for an animal that lives in the trees. Tarantulas also have urticating, or barbed, hairs on their bodies. Many other animals and plants use a similar defense, including certain moths and stinging nettle. Skin irritation is the main result. It’s another reason to avoid handling tarantulas.

A Green Bottle Blue Tarantula isn’t quick to bite. Instead, it will try to flee a threatening situation, giving you plenty of warning to leave it alone.

These spiders will molt to grow. The exoskeleton shed will look just like another spider. You may notice that your tarantula isn’t as active during this time and probably won’t eat either. If you handle your pet, it’s best to avoid doing so during the molting phase. It can take a couple of weeks before it’s complete and the new exoskeleton has hardened. During this time, your tarantula will feel vulnerable and more likely to release barbs or bite.

The Green Bottle Blue Tarantula is a striking organism. Its abdomen is an electric orange. Its carapace, or upper shell, is a dazzling blue-green. Its legs are green and blue, with a broad range of shades. Its body length is 2.75” L, with a 6.25 diagonal leg-span (DSL). This tarantula has a moderate growth rate. Sexing individuals is only possible after sexual maturity, by examining their molt shed.

The male has a simple slit, while the female has a bulging organ at the site of the spermatheca, or its reproductive organs. A live animal is unlikely to allow you to look for it, which is why you must wait until it molts.

How to Take Care of the Green Bottle Blue Tarantula

The care of the Green Bottle Blue Tarantula is relatively easy if you provide the environment that it needs. It prefers a drier setting, indicative of its native habitat. Humidity levels around 60% are ideal. It can do well at room temperature, as long as the ambient temp is at least 72℉.

A 5-gallon or larger tank makes an excellent home for your Green Bottle Blue Tarantula. It can help prevent drafts and maintain the proper humidity levels. It’s also a neutral environment that is easy to clean and relatively inexpensive. You should clean the enclosure at least once a week, removing the tarantula from inside beforehand. You should also provide fresh water daily.

It’s essential to balance the health of your pet with the ease of cleaning. Coconut fiber or sphagnum moss are excellent choices of substrate. You can also use vermiculite or a mix with peat or potting soil. A 2-inch layer is ideal. You should replace it every 4-6 months. Doing so will prevent bacteria development.

Tarantulas don’t need a heating lamp like reptiles. However, the right location is essential. You should avoid drafty places near vents. You should also keep the enclosure out of direct sunlight. The latter can dehydrate your pet by lowering the humidity to dangerous levels. Hang a thermometer and hygrometer to monitor the temperature and humidity.

Adding plants and a hiding place will help make your tarantula feel secure in its new home. It’s especially important with a species that has the temperament of the Green Bottle Blue Tarantula. We suggest getting products that are easy to clean, with impervious surfaces to prevent bacteria development.

Do Green Bottle Blue Tarantulas Get Along With Other Pets?

The Green Bottle Blue Tarantula does best on its own in the confines of a tank or enclosure. Keeping more than one together will likely result in death to one of them. You can put a male and female together if you want to breed them. However, this should be a brief encounter; do not house the two together permanently once they have mated.

What to Feed Your Green Bottle Blue Tarantula

The Green Bottle Blue Tarantula is a carnivorous creature. In its native habitat, it’ll feed on a variety of prey that it catches in its webs, including worms, insects, and even mice or birds. A captive diet will include the foods that you’d offer reptiles and amphibians, including crickets, pinky mice, and mealworms.

You should feed juvenile tarantulas every day. Adults will do well with a larger meal once a week. It’s imperative to remove any uneaten food promptly. Bear in mind that your tarantula won’t eat much, if at all, during a molt. We don’t recommend giving your pet live food until its exoskeleton has hardened to provide some defense.

A suitable environment and a high-protein diet are the best ways to keep your pet healthy and support a long lifespan. Signs of potential problems include:

You may notice that your Green Bottle Blue Tarantula hides when they are unwell. That’s a common behavior with any animal in a similar situation. Staying under cover protects them when they are vulnerable to predation. This species is a hardy one, so any change in its habits is a red flag, except while molting.

You may or may not succeed with trying to breed your Green Bottle Blue Tarantula. Females are picky about their mates. You can try putting a male into the female’s cage. The order is imperative, as otherwise, the female will attack the male. Mating will occur shortly thereafter if it’s going to happen at all. The male will then retreat, which is your signal to get it out of the enclosure.

The female will lay up to 100 eggs. It’s essential to provide sufficient food during this time. High-protein sources are ideal. It will take up to 10 weeks before the young are visible. They will molt shortly thereafter. Then, you must remove them from the cage. The female will feed on them if you don’t get them out of harm’s way.

Are Green Bottle Blue Tarantulas Suitable for You?

Tarantulas aren’t the best pet for everyone. Many people want an animal as a companion or at least one that they can touch. While the Green Bottle Blue Tarantula is docile enough, it can still bite or release its barbs. There’s also concern about it getting injured if it falls to the floor. If you’re looking for a beginner-friendly, hands-off pet, though, this one has much to offer.