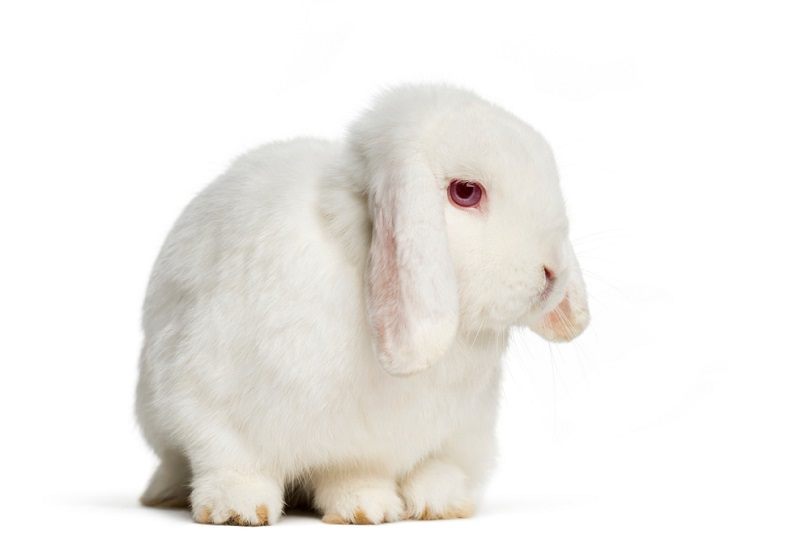 These miniature rabbits only weigh a few pounds, making them some of the world’s smallest rabbits. If you want a rabbit that remains a baby forever, this is it. Their maximum weight is only 4 pounds, though many weigh as little as 2.

Despite their tiny stature, their lopped ears are probably some of their most distinctive features. They are one of the most popular rabbits in the United States and the United Kingdom.

The Holland Lop is one of the most common rabbits in the US and UK. This is likely because of their small size. These rabbits have a maximum weight of 4 pounds, with many weighing as little as 2 pounds. Because of their exceedingly small size, many people find them easier to keep than bigger rabbits. They don’t need as much food or as large of an area to stay in.

They have a muscular but compact statue despite their small size. They are quite sturdy and can withstand a lot more than you would expect. This doesn’t mean they don’t need some special care because of their smaller size, though. They are more delicate than a lot of other breeds.

How Much Do Holland Lop Rabbit Cost?

Like most rabbits, the Holland Lop Rabbit is usually pretty inexpensive. They can cost as little as $40. Most will range between $20 to $400. Those from champion lines and breeders will cost the most. However, the extra cost may be worth it.

More expensive rabbits tend to be healthier, as they are bred by a more experienced breeder. Of course, don’t assume a rabbit is healthy just because of its price. Ask about the parents and ask to see where the kits and mother are staying.

There is no health testing that is required or recommended for these rabbits, so that is not an issue you need to bring up to the breeder.

As a breed, these rabbits are considered to be very calm. They love to spend time with their owners and aren’t particularly skittish, making them perfect for families with children. They like to spend time both playing and relaxing.

They do like to chew on things quite a bit, even beyond the extent that rabbits usually chew. They require plenty of chew toys to prevent the chewing up of your furniture and personal belongings. This also helps them keep their teeth at a reasonable length, though they will still likely need to be ground down at the vet office.

Overall, these are considered to be friendly, family-oriented rabbits. Males are considered a bit less nippy than females, which tend to be a bit shyer. However, females are much less messy than males and are less likely to chew up your stuff. In the end, it mostly depends on your preferences.

As we previously mentioned, these rabbits are relatively small. They can weigh anywhere from 2-4 pounds and are some of the smallest rabbits around. They have rather dense fur that comes in a variety of colors.

The most popular color is light orange, which is usually referred to as “fawn.” Blue and gray are also standard. There are many shades of gray possible, but all the rabbits are referred to as “gray” or “blue” no matter their tone. Dark brown is a bit less common but still possible, as is a lighter brown. Some rabbits are white, but this is considerably rarer and tends to drive up the rabbit price. Many people want pure white rabbits, so they tend to get snatched up very quickly.

When you breed two different colorations together, you can get a unique coloration. Technically, anything is possible. However, most breeders choose to keep colors separate, so there seems to be such a significant distinction between the different colors.

There are several different feet varieties, though the difference is not particularly important for the average owner. The feet type does give breeders some indication of the rabbit’s final size, though this is not always fool-proof. It is just as easy to rely on the parents’ size when predicting the size of the baby rabbits.

How to Take Care of a Holland Lop Rabbit

Despite their small size, these rabbits do need a decent amount of space. Many owners choose to keep their rabbit in a cage when they cannot be directly supervised. However, with proper training, you can let your rabbit hop around your house with only occasional supervision. This will require rabbit-proofing your house.

This includes picking up anything your rabbit may chew on, including wires and other unsafe items. This is very similar to puppy-proofing.

Rabbits can use litterboxes and should be trained to do so. Many rabbit parents keep their rabbit in their cage and clean the liner. However, this is not as clean as training your bunny to use a litterbox like a cat.

Your rabbit’s cage should be at least large enough for your rabbit to stretch out comfortably, as well as big enough to hold their litter. If your rabbit spends much time in the cage, choose a larger cage. Even if you have a very ample time, you will need to provide your rabbit with plenty of exercise time. Outdoor rabbit hutches are also recommended to allow your bunny to spend some time outside hopping around.

Do Holland Lop Rabbits Get Along with Other Pets?

As rabbits, these pets tend to be seen as prey animals by other pets. Both cats and dogs can potentially injure these bunnies, as they are tiny. It isn’t that the rabbit won’t get along with these other common pets, but they will often be seen as a prey animal.

With that said, Holland Lop Rabbits get along fine with other rabbits and non-aggressive animals. For example, you could bet that they’d be okay with rats and other rodents. They aren’t going to bother fish or anything of that sort either. These rabbits are very common and not aggressive.

What to Feed Your Holland Lop Rabbit

Holland rabbits need similar care to other rabbits. However, they typically need less and smaller stuff since they are much tinier than most other breeds out there.

They need access to fresh water frequently, as well as hay. They need a regular diet of fresh veggies and rabbit pellets. Their diet is basically the same as every other rabbit out there but in smaller amounts. You’ll likely find that your rabbit prefers certain foods to others, but it is essential to feed them a varied diet – not just their favorite foods all the time.

They can be trained just like any other animals, primarily if you use their favorite foods as treats. They can be litter trained and even taught to do simple tricks, like heeling or hopping.

Holland Lop Rabbits are generally healthy. They are not prone to many problems and need minimum care to thrive. They only require basic grooming in most circumstances. While they are not genetically prone to many issues, they can still be affected by common rabbit diseases. As an active breed, they require plenty of playtime and are not suitable to be kept in a cage for extended periods.

When it comes to grooming, these rabbits need to be brushed weekly. They do self-groom, but ingesting too much hair can cause blockages. It is in the rabbit’s best interest if you remove most of the hair. They may need extra brushing while they are molting, which typically occurs for a few weeks once a year. Their nails also need to be checked and trimmed regularly.

Like all rabbits, the Holland Lop will need their teeth checked regularly. Overgrown teeth can be very painful and cause significant problems, like infections. A correct diet should be enough to keep the teeth worn down, though a trip to the vet can trim down their teeth as well.

Wire-bottom cages should be avoided. These are bad for their feet and can cause sores.

Younger rabbits are particularly prone to enteritis, gut stasis, and bloat. All of these issues can possibly be deadly. Because of their lop ears, they are also prone to ear infections. Keep their ears clean and well-groomed. Parasites are possible, especially mites. They tend to get these from other rabbits or outside areas.

Parasites are easily treatable with a spot-treatment or injection. They are not typically deadly or serious, but they can be extremely annoying for the rabbit.

Holland Lops must be six months old or older before they can breed. If a doe reaches the age of two before breeding, it is generally recommended not to breed her. The rabbits’ hips continue to fuse as they age, and her hips may be too fused to prevent complications.

Rabbits can breed at any time. However, spring and autumn are best, as the weather is decently mild. You will need to ensure that you can be present during the labor and will be home for at least the first two months after the kits are born.

Before breeding, both the doe and the buck should undergo a health check. This is particularly important with the female, but you don’t want the male transmitting any diseases.

Holland Lops do not have a heat cycle like other animals, so they can technically breed at any time. However, they can be rather picky and will only do it when they are in the mood. This can change from day to day. It is essential that you are there when the buck is introduced, as fights are not uncommon.

To find out if a rabbit is pregnant, you can palpitate her stomach. This can be done around day 10-14 after the breeding. You can also tell by weight, assuming you knew how much the rabbit weighed before getting pregnant. By day 14, the doe should have gained several ounces if she is pregnant.

Behavior changes can occur as well. Some does become territorial or “mean” after they become pregnant.

Are Holland Lop Rabbits Suitable for You?

Holland Lop rabbits are probably some of the easiest to take care of. They are generally easy-going and friendly, making them perfect for families. They also aren’t prone to many health problems, and many of them remain healthy throughout most of their lives.

However, these rabbits do require specialized cages and food. You should have enough time to let them exercise outside of their cage and provide them with the proper diet. They are not a breed you can leave sitting in their cage for days at a time. Their activity level requires that they get plenty of exercise.