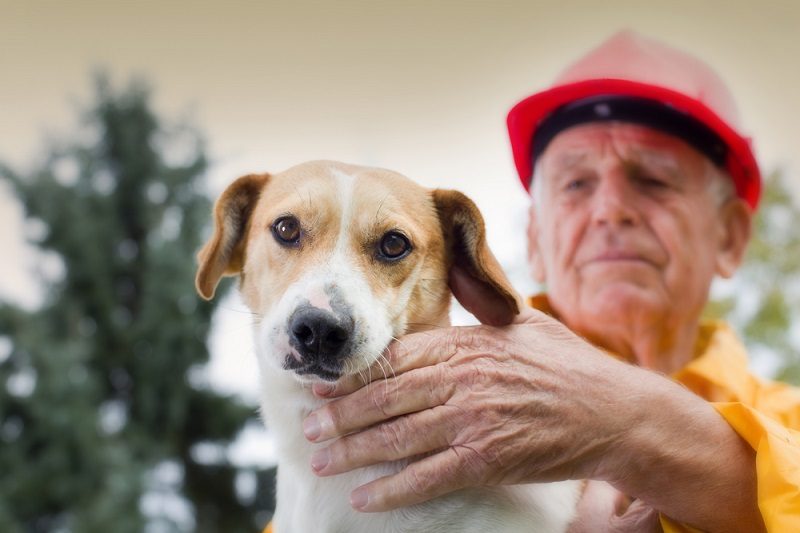 It’s not something anyone likes to think about, but an unexpected natural disaster could destroy your home, leaving you scrambling to find food, shelter, and a way to rebuild your life.

This scenario is even more daunting if you have pets in the house. While you may be confident in your own ability to weather any storm, it’s another thing to ask your dog to do the same. After all, they won’t understand what’s happening, and they may not adjust well to living in an emergency shelter or other temporary housing.

That’s why it’s so vitally important to have a plan in place before disaster strikes. Knowing how you’ll handle the worst-case scenario will give you an important head start when dealing with an extreme scenario, and that could be the difference between a relatively easy transition and one that’s traumatic for both you and your dog.

In the guide below, we’ll show you everything that you need to be prepared for when disaster strikes.

While extreme and unexpected weather is always a possibility, you likely have a good idea of what potential disasters could occur in your area. As a result, you should already know which situations are most likely to affect you and what you need to plan for.

However, many disasters share common traits and require you to take the same steps to prepare for them. So, let’s first cover universal tips that can aid you in the event of any disaster.

This is an important step even if you never have to live through a disaster, as a microchip can help you become reunited with your dog if they ever get lost. They’re much more likely to get separated from you in the aftermath of a disaster, though, so it’s vital that you have  a way for rescuers to contact you if they find your pup.

Pick a neighbor, friend, or family member who lives near your home and ask them to be responsible for your animals in case disaster strikes while you’re not around. This gives you peace of mind that someone will look in on your dog even if you’re not available. You can offer to return the favor if they have pets of their own.

You may need to spend a fair amount of time in a hotel if your house is damaged, so it’s important to find one ahead of time that accepts dogs. This will save you valuable time when you’re racing to find a place to stay in your area before all the available lodging is taken.

4. Check out local shelters and boarding houses too.

If worse comes to worst, you may not be able to stay with your dog. You need to know the names and locations of trustworthy places that can watch your pup for you until you’re back on your feet.

5. Have an evacuation kit prepared.

Keep a bag or box ready that’s filled with your dog’s food, medication, toys, shot records, and anything else that they’ll need when staying away from home. Store it somewhere you can easily grab it while heading out the door.

The above list presupposes that you’ll be evacuating with your pet. However, if you plan to shelter in place, you’ll still need to do all of the above, but you should also make sure you have a battery-powered radio, several flashlights and candles, and plenty of clean water on hand while you ride out the disaster.

Now that we’ve covered general emergency preparedness, let’s look at how to deal with specific disasters.

Floods and hurricanes require you to take similar steps to be prepared, with one key difference: A hurricane will give you plenty of warning, whereas a flash flood could happen almost immediately. So, if you live in an area that’s prone to flash flooding, you need to prepare well before the first cloud forms in the sky.

In addition to the general tips above, you should also:

1. Always keep your dog by your side.

Keep them leashed and harnessed if you have to, but you do not want to get separated from your dog. Dogs panic during floods and that usually leads to deadly decision making. You’ll want to be able to guide them to safety if need be.

2. Never leave your dog tied up or in a crate.

While dogs don’t make the best decisions in a crisis, that’s vastly preferable to leaving them completely helpless. If they can’t escape the yard or their crate, they will almost certainly die, so give them a fighting chance.

3. Keep your dog away from flood waters.

Drowning is obviously the biggest risk of being exposed to flood waters, but it’s far from the only one. Most flood water is absolutely filthy, as it’s full of contaminants like sewage. It may also contain dangerous animals, like snakes or stinging insects, or dangerous objects, like sharp metal. Keep your dog well clear of the rising water.

Earthquakes strike with no warning, but they’re generally limited to a few locations. If you live in a place that’s prone to earthquakes, it’s essential to know what to do if the ground starts rumbling.

1. Stay inside if at all possible.

Seek out shelter under a sturdy table or doorframe, and avoid glass windows and doors. Your dog may not shelter with you, preferring instead to find their own hiding place. That’s fine — just approach them carefully after the shaking stops. Don’t try to restrain them if they want to leave your side, as that could cause them to lash out violently.

2. If you must go outside, stick to open areas.

After an earthquake, the biggest dangers will be fires, broken power lines, and shards of glass and metal. Try to avoid all of them by sticking to open areas. Keep your dog leashed and by your side at all times so they don’t get into any trouble.

Tornadoes don’t offer much more warning than do earthquakes, but you should have at least a few minutes to prepare for one. Here’s what you should do if you hear a tornado siren going off in your area.

Never leave your dog outside during a tornado, regardless of whether they’re chained or loose. Bring them inside, preferably into your storm cellar. In fact, you should practice rounding them up and taking them to safety, so both you and your pet are prepared and unlikely to panic when the real thing happens.

2. Put your dog in a crate or carrier.

You don’t want them wandering around or potentially escaping during a panic. Keep them in their crate and cover it with a blanket so they feel safe and secure.

3. Be careful about leaving the house.

You’re not necessarily safe even when you get the all-clear from the authorities. There might be downed power lines, broken gas lines, or dangerous debris outside your house; also, dangerous animals may be around, as they would’ve been displaced from their natural habitats. Again, keep your dog leashed and by your side.

Fires are extremely common and they strike without warning. You may only have a few minutes to evacuate with your dogs, so it’s important to know what to do ahead of time.

1. Place a rescue sticker on your doors.

This lets firefighters know that there are animals inside, so they can know to look for and potentially rescue them. This is an essential backup plan in case you’re not able to take your dogs out yourself.

2. Use pet carriers if possible.

It may be hard to convince your dog to run out of a blazing house, so you’ll need to be able to carry them safely and easily. A carrier is the best way to do this, but a leash and harness can also work.

A dog’s natural instinct is to hide from danger, so they may seek out a hiding place rather than run for safety. If you know where they like to hide, you can grab them and carry them to safety without having to spend precious time looking for them.

What to Do If Your Dog Becomes Lost After a Disaster

Despite your best efforts, there’s always a risk that you could become separated from your dog. If that happens, there are steps you can take to make it more likely that you will be reunited.

The advice below assumes that your dog is microchipped and has proper identification on them; otherwise, those are the first two steps you should take.

After a disaster, most lost pets end up in local animal shelters. There may even be temporary shelters set up if quite a few pets have been affected. Visit them in person with a picture of your dog, and walk around calling for them. You may not see them nor they you, so it’s important that you give them another way to become aware of your presence.

Your dog may get injured during the disaster. If rescuers come across an injured animal, they’ll take them to a local vet or animal hospital. The first thing that the doctors will do is check to see if the animal is microchipped, which is another reason you should do that ahead of time.

If you don’t have any luck with shelters or vets, you’ll need to advertise. Don’t just put their picture on a piece of paper with your phone number. Be as descriptive about your dog as you possibly can; mention any identifying marks, describe their behavior, and let them know if the dog responds to any commands. These fliers will also come in handy when you check the shelters again later.

4. Check with your neighbors.

Your dog will likely want to return to familiar territory, but their old stomping grounds may be unrecognizable after a disaster. Ask your neighbors if they’ve seen your dog, and see if they’ll let you check around their property. Be sure to inspect bushes, porches, barns, and other buildings.

Just because your dog made it through the disaster physically unscathed doesn’t mean they won’t have mental scars from the experience. Dogs thrive on routine, so all the upheaval that a disaster creates can send them into a tailspin.

That's especially true if they have to live in a shelter or temporary housing rather than being allowed to return home. The stress can be mitigated somewhat if they’re allowed to stay with you, but even then, they’ll likely be unsettled by the experience.

Here are a few signs that your dog may be stressed after a disaster:

Once you’ve identified that your dog is having issues dealing with the disaster, you’ll need to take steps to help them. Fortunately, most of the things that you can do are both free and easy, so there’s no reason for your dog to keep suffering.

Things you can do with your stressed dog after a disaster:

It’s important to remember that your dog is being placed in an unusual, stressful situation. As a result, they may not be themselves for a while.

They may be more likely to lash out or show aggression, so treat them cautiously, and never leave your children unattended around them. Even a trusted family pet can be capable of behaving dangerously when they’re under a ton of stress.

Surviving a disaster is never easy, and it’s even harder when you have a pet to think about. That’s why it’s essential to plan before disaster strikes, so you’re prepared for anything Mother Nature can throw your way.

If you take the time to prepare for the worst-case scenario, you’ll give both your dog and your family the best possible chance of coming out of the disaster intact — and more importantly, the chance to come out of it together.