Spix’s Macaw – A Little Hope for the Little Blue Macaw 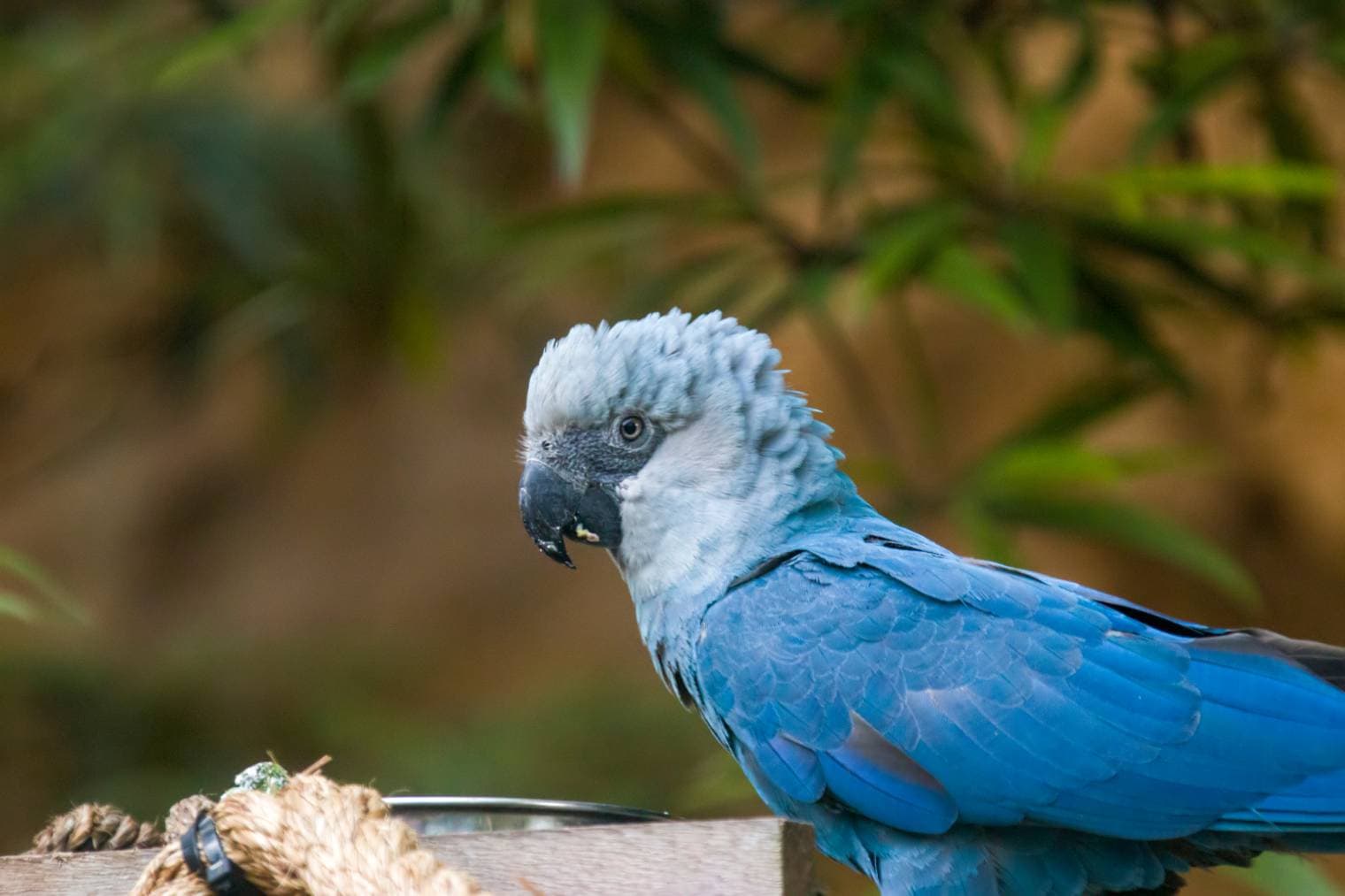 The Spix’s macaw, or little blue macaw, is one of the rarest birds in the world. But this is unfortunately due to the fact that illegal trade, destruction of its habitat, hunting by humans, and other wild predators have led to its disappearance from the wild. Indeed, the last wild Spix’s Macaw was seen over 20 years ago. Now, according to the IUCN Red List, the Spix’s Macaw is considered to be extinct in the wild.

But, thanks to a global team of experts and passionate supporters of this iconic Brazilian blue parrot, the Spix’s macaw is making a comeback to its natural habitat. Read on to learn more about this gorgeous little bird and how conservation efforts are bringing a little silver lining to its return to the wild.

A member of the Psittacidae family, the Spix’s Macaw is a parrot also called a little blue macaw. With a relatively average size, it is not one of the large parrots – such as the hyacinth macaw with which it is sometimes confused.

It is easily recognized by its cyan-blue plumage, a relatively light shade that becomes lighter the closer you get to the animal’s head. The separation between its body and its head is clearly marked thanks to this lightening of the feathers.

Its eyes are rimmed with an even lighter blue, almost white. As for its beak, it resembles those of other parrots with a prominent upper part that covers the lower part. The Spix’s Macaw used its powerful beak to crack the nuts on which it fed in nature.

The Spix’s Macaw was named after Johann Baptista von Spix, who discovered the first specimen in Bahia State, northeastern Brazil, in 1819. Although this species exists in several captive populations, the last known individual in the wild went extinct in late 2000, without any subsequently confirmed sightings of wild individuals. According to the IUCN’s Red List, the Spix’s Macaw is now considered extinct in the wild since 2018.

Why Did the Spix’s Macaw Go Extinct in the Wild?

The Spix’s Macaw used to live in northeastern Brazil. It was mainly found in the Caatinga, a dry forest distinguished by vegetation consisting of scattered thorny trees and shrubs, a layer of grasses during the rainy season, and a semi-arid climate. This habitat has unfortunately significantly suffered from deforestation and global warming. It is considered that more than half of the Caatinga has disappeared or been altered from its original surface. The disappearance and degradation of this biotope are also considered to be the main reasons for the decline of Spix’s Macaw in the wild.

In addition to the disappearance of its habitat, this small parrot also had to face a direct threat: hunting and trapping. For many decades, the little blue macaw has indeed been highly sought after. Historically, it has been hunted for its meat and, more recently, for illegal wildlife trafficking.

The introduction of aggressive African bees and the construction of infrastructure in the habitat of Spix’s Macaw also accelerated its decline, starting in the 1970s.

All these threats combined led to the species’ extinction in the wild in 2018.

Will the Spix’s Macaw Ever Return to the Wild?

Conservation efforts have been made for years to repopulate Spix’s macaws in the wild. Unfortunately, the existing captive population was descended from only seven wild-caught birds, making it difficult to collect the DNA needed for breeding programs for these birds.

Conservation Efforts to Save the Spix’s Macaw

Thanks to all the conservation efforts being made by the global team of experts, breeding programs could be set up and lead, in March 2020, to the arrival of 52 Spix’s Macaws in Brazil for their reintroduction. Prior to that, the birds lived at the Reproduction and Breeding Center of the Association for the Conservation of Threatened Parrots (ACTP) in Berlin.

Also, Pairi Daiza, a Belgian foundation whose mission is to reintroduce animal species into their natural habitat, has contributed to the reintroduction of the Spix’s Macaw in Brazil, in collaboration with ACTP, the Brazilian government, and the Chico Mendes Institute (ICMBio).

This project is finally starting to bear fruit: indeed, about a year after the return of the first 52 Spix’s Macaws from Europe to their native region, and for the first time in 30 years, a young Spix’s Macaw has hatched in the Brazilian Caatinga. This long-awaited birth took place in the breeding and reintroduction center, which is entirely dedicated to the conservation of this magnificent blue parrot.

This baby bird symbolizes an essential step in a conservation project that began with passion more than 30 years ago. Thanks to the tireless commitment of all partners, it was possible to reform a robust population of Spix’s Macaws, with great genetic diversity, but also to meet all the conditions for a gradual reintroduction into the Caatinga, its habitat of origin.

So Spix’s macaw, which you might know from the animated film Rio, could finally start to thrive again in its natural environment, twenty years after disappearing in the wild. This project, if successful, will be a world-first; indeed, until now, man has never succeeded in reintroducing a species of bird extinct in nature into the wild. If you are curious about the progress of this reintroduction, you can have more information on the Association for the Conservation of Threatened Parrots (ACTP).