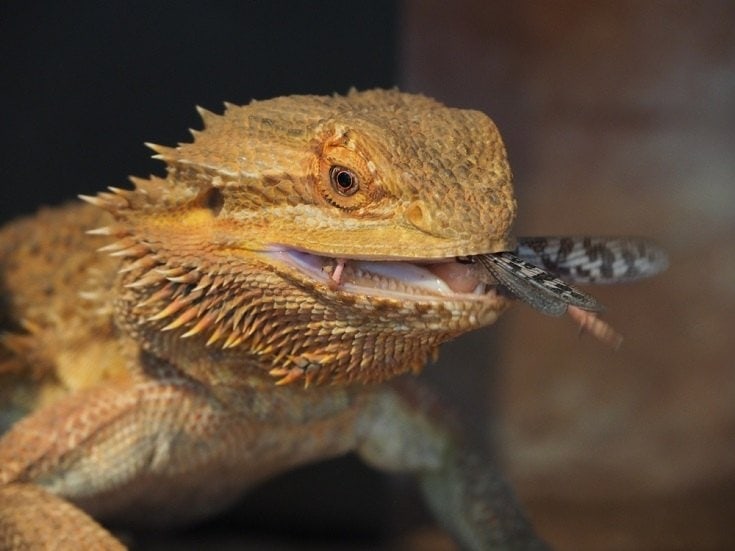 Armored with sharp reptilian scales and a beard of spikes, the bearded dragon certainly does justice to its namesake. Fortunately for us, they’re not 20 feet tall and terrorizing our villages. Instead, they are very commonly found as pets in lizard-loving homes.

But if they’re not going to capture the townsfolk, what do bearded dragons eat?

These lizards aren’t the pickiest of eaters and will gulp down almost anything. They’re omnivores just like us, meaning that they’ll consume both animal-based proteins and plant matter. Younger bearded dragons tend to lean on the carnivore side and consume more lean protein as they are growing. However, older lizards prefer a more plant-based diet.

Let’s take a closer look at what this entails and break down the diet of a bearded dragon.

How Often Should Bearded Dragons Eat?

Before we get into actual specifics, you should understand their feeding cycle. Bearded dragons are diurnal animals, which means they are very active during the day and sleep at night. But that doesn’t mean they spend all day hunting. In fact, they only need to feed once or twice daily. Overfeeding can lead to them becoming lethargic and ill.

You’ll find that older, mature lizards are more likely to only eat once a day while younger, growing lizards will prefer two meals a day. This coincides with their diet shift from animal to plant-based as they age.

In the wild, bearded dragons are very resourceful foragers and consume a ton of small bugs such as grubs and beetles. However, it’s been found that termites provide some of the best nutrition for them. This is partly due to what these termites gut load on and their natural calcium supply.

However, it can be a little tough to get your hands on some gut-loaded termites for your bearded dragon at home. Instead, we need to opt for other sources. While it may seem like a good idea to catch wild bugs from your home garden, it may not be the best choice — and that’s due to pesticides and fertilizers in the soil.

Instead, choose farm-raised insects from your local pet shop or raise insects yourself. This will ensure that their bugs are free of any harmful chemicals and will allow them to live their best lives. Here are some of the best sources of animal-based protein to feed your beardy:

Since these animals are farm-raised, they might not have all the nutrients that wild bugs will have. That’s why it’s particularly important to gut load them while raising or to dust them with nutrient powder before feeding to your lizard.

We recommend Fluker’s High Calcium Cricket Diet Reptile Supplement. Don’t let the name on this cricket dust fool you. It’s not all just calcium. While high in much-desired calcium, this dust contains protein, vitamins, and minerals your bearded dragon needs.

Also, you should avoid feeding your bearded dragon fireflies. There’s a compound that they carry that makes them toxic to beardies. So, leave them be.

When it comes to plants as food, it’s pretty simple to figure out. In the wild, beardies will forage for leafy greens and even flowers to eat. This holds for pet lizards as well. The plant portion of your bearded dragon’s diet should primarily consist of dark, leafy greens that provide good nutrition such as collards, mustards, turnip greens, kale, parsley, clover, dandelion greens, or Swiss chard. These will ensure your lizard gets the nutrition they need.

Although they may seem healthy, you should avoid light green nutrient-poor vegetables such as iceberg lettuce and celery. They’re essentially just crunchy water and do little to help your bearded one along.

You can also sparingly feed them other veggies such as squash, sprouts, parsnips, cucumber, okra, and cooked sweet potato. There aren’t any veggies you should avoid—some just don’t give as much nutrition as others.

Your bearded dragon can also eat fruit. However, this should only make up a small portion of their diet. Fruit just doesn’t contain as many key nutrients as dark leafy greens. Instead, use them as toppers for their leafy green salads.

Flowers are another source of food you can occasionally give to your lizard. If you decide to take that route though, you should ensure that they are grown organically with no pesticide and all-natural fertilizer.

As you can see, beardies aren’t very picky. There’s so much food available for them! Just be sure to gut load and dust your animal proteins, skip over fireflies, and avoid feeding them veggies that have been treated with chemical fertilizers and pesticides.