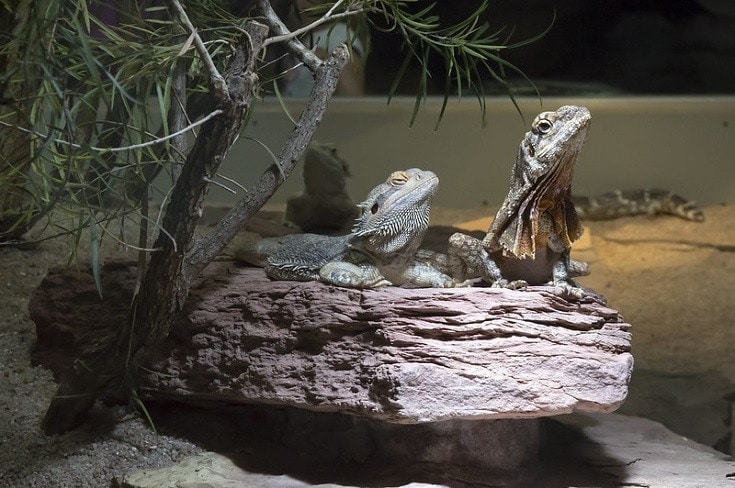 More properly known as the Pogona, the Bearded Dragon is a genus of reptiles containing eight lizard species — all native to Australia.

Available in sizes ranging from handheld to over two feet long, they have become a popular option to keep as pets due to their mellow nature and signature looks.

If you’ve ever wondered about the wide variety of Bearded Dragons that you can keep as pets, look no further! We’ve collected a list of the nine different essential species of bearded dragons. While each of these can display a wide range of characteristics depending on their morphs or mutations, these form the basis for every other type of Bearded Dragon available today.

Also known as the Coastal or Eastern Bearded Dragon, this large species of Bearded Dragon can grow to a whopping two feet long! Being native to dry, wooded areas, they are most active during the warmer daytime hours. With scarce resources in their natural habitats, they tend to be territorial and aggressive towards other lizards.

The friendly little chap, also known as a Rankins or Lawsons Bearded Dragon, is a diminutive species that just loves to climb. Their preference for dry and arid landscapes with lots of rocks makes them a natural pick for anyone who lives in a desert region or wants to recreate one for their pet lizard.

More commonly called the Small Scaled or Drysdale River Bearded Dragon, these lizards are incredibly rare. With an extremely limited habitat in Northwestern Australia, you’re unlikely to see one at your local pet store. They grow up to a maximum length of six inches.

Also known as the Dwarf Bearded Dragon, these medium-sized lizards grow to be around 14-18 inches. They are especially difficult to find in the wild and prefer rocky areas and woodlands for their home.

Also known as Western Bearded Dragons, or the more foreboding Abrolhos Dwarf Bearded Dragon, these medium-sized lizards are found only in a sparsely populated range of three Western Australian islands. They grow up to about 12 inches and prefer dry woodlands for their homes.

Commonly called Mitchell’s Bearded Dragon, this species of bearded dragons are increasingly rare as their natural habitats have been developed for human use. They can grow up to about 18 inches and prefer to make their homes in semi-tropical woodlands and deserts.

The so-called Banded Bearded Dragon can grow up to 14 inches and is usually found in environments covered in flat brush. They are most easily recognized by their long series of dark horizontal bands across the back and tail.

Also known as the Inland or Central Bearded Dragon, these lizards are found almost exclusively in Central Australia. An excellent companion for humans, they are friendly, docile, and love to climb. They commonly grow to two feet in length and are perhaps the most popular species of Bearded Dragon to keep as a pet.

A naturally occurring crossbreed between the Pogona Vitticeps and Pogona Henrylawsoni species, this is the most recently discovered type of bearded dragon. Sometimes known as a Vittikins Dragon, they have very agreeable temperaments and grow to about a foot in length — making them an ideal species to keep as a pet.

What is a “morph”? Morph can refer to colors, patterns, size, body and head shape, spikes, scales, and even eye and nail color. Bearded Dragon morphs are determined by genetics, so breeding Beardies with different dominant or recessive genes to each other will result in different combinations of morphs.

This morph is the most common type of Bearded Dragon and while they are domestic, they are the closest to wild-type bearded dragons. This Bearded Dragon morph has the recognizable triangular head, spiky beard, and spikes covering the body. These Bearded Dragon colors are usually tan or brown but can also be red or yellow and may have markings that are black or orange.

Melanin is responsible for skin and scale color, so Hypomelanistic Bearded Dragons have low levels of melanin, making them very light colored. They are usually white or muted yellow and have yellow, white, or clear nails. They may have patterns and markings, but they are unable to develop dark colors. Their body type and spike pattern are the same as Classic Morph Bearded Dragons.

The Zero morph is a subcategory of the Hypomelanistic morph. These Bearded Dragons are completely white except for some have a little black near their shoulders.

Microscale Bearded Dragons do not have scales or spikes along their back or sides, and often are more brightly colored because of this. This morph does cause scales and spikes on the head.

This morph is one of the most unique because Silkback Bearded Dragons have no spikes or scales. Their skin is smooth and soft, and they can be easily injured. They tend to have brighter colors than other Beardies because there are no spikes or scales to interfere with their underlying color.

This morph causes the Beardie to have translucent scales and spikes. They tend to be hypomelanistic, but they can be just about any color and pattern morph. These Bearded Dragon colors are usually white or blue when young, but this color will change as they age. They also usually have black or very dark eyes with irises that are very difficult to see.

The Dunner morph is easily confused with the Classic morph. They differ in that Dunner Bearded Dragons have asymmetrical markings that appear to have no discernible pattern, as opposed to Classic Bearded Dragons which usually have symmetrical markings. They may have spots instead of the stripes seen in Classic Beardies. Their scales and spikes may also point in different directions.

Another subcategory of the Hypomelanistic morph, Witblit Bearded Dragons are extremely light-colored, but they are rarely white. This morph usually creates dull, light pastels, tans, or greys. They have no patterns anywhere on their bodies.

A crossbreeding of the Zero and Wiltblits morphs created the Wero morph. These bearded dragons are very similar to Zeros, having black near their shoulders and some dark areas near the base of the tail.

Since Paradox coloration is an anomaly and is not known to be connected to a specific gene, it is not considered a morph. These Bearded Dragons hatch out as solid-colored, but over time they begin to develop patterns across their bodies that are unique to each Paradox Bearded Dragon. These patterns are usually brightly-colored.

Bearded Dragons come in multiple color morphs including tan, orange, yellow, red, white, green, blue, and violet. Out of these colors, they come in the following shades: beige, brown, citrus, tangerine, sunburst, lemon, gold, sandfire, blood, ruby, grey, silver, and olive. These color and shade morphs can be combined with other size, scale, and shape morphs.

Final Thoughts on the Different Types of Bearded Dragons

Bearded dragons are fascinating creatures, indeed! With a wide range of base species and an even wider selection of mutations and morphologies, there’s sure to be a size and shape to fit your pet desires. We hope you enjoyed this guide to all the known species of bearded dragons!