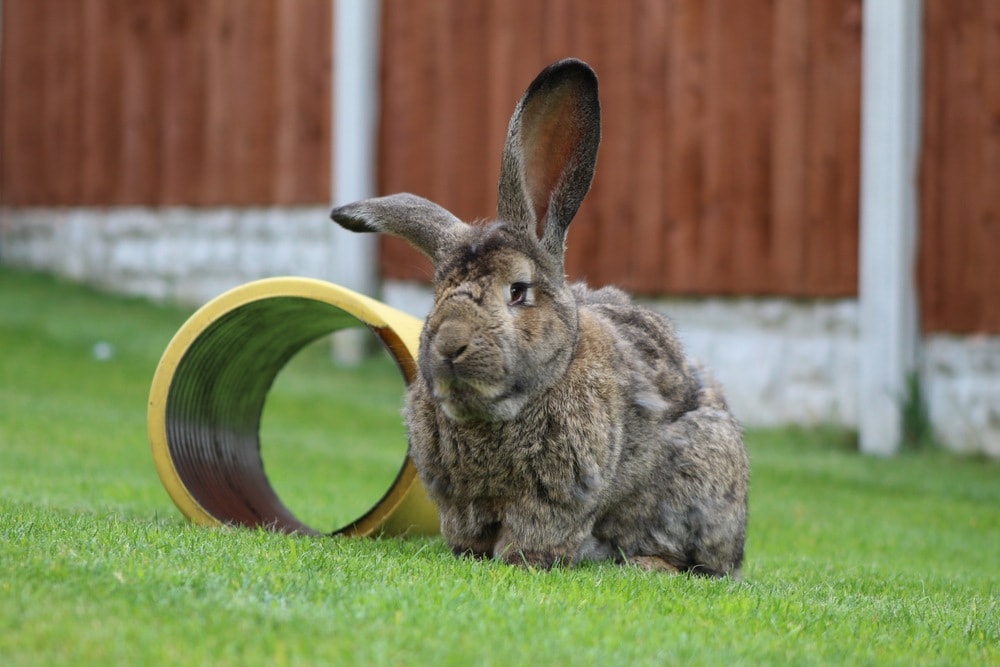 Long-time holders of the record for “largest rabbit in the world”, the Continental Giant is a breed of truly epic proportions. These European-born bruisers are impossible to ignore, with the largest examples coming in at over 4 feet long!

Often outsizing even medium dog breeds, the Continental Giant has found loving homes around the country due to its incredibly docile nature and ability to be trained. If you’re looking for a rabbit breed unlike any other, read on to find out more about what makes the Continental Giant so special!

History and Origin of the Continental Giant Rabbit Breed

Speculated to be the descendant of Flemish Giant rabbits and wild European Hares, the Continental Giant has been a recognized breed in Europe since the late 1800s. Sometimes known as a German Giant rabbit, their family tree takes them back to Belgium in the mid-16th century.

While little may be known about this oversized breed’s exact origins, it has been shown in British Rabbit Competition shows since the early 1900s. Described as being a “big solid rabbit giving an impression of power” they have been capturing public attention for well over 100 years now.

You can’t look at a Continental Giant without noticing its most amazing feature: It’s absolutely massive! With their bodies regularly measuring longer than two feet, and weights commonly coming in at nearly 30 pounds, these gentle giants definitely stand out from a crowd. By comparison, you would need nearly a dozen Netherland Dwarves to equal the weight of a single Continental Giant!

Still possessing some of the dignity of their hare ancestors, Contis (as they’re affectionately called by some owners) have a full and imposing presence which belies their truly gentle nature. Affectionate and playful, they have even been known to take rather well to training.

For an example of how truly gigantic these rabbits can be, look no further than Darius, the one-time world record holder for “longest rabbit” at an astonishing 4 feet 4 inches long. While not quite as long, a Continental Giant rabbit named Ralph from Sussex officially weighed in at almost 53 pounds. While these record-breakers aren’t typical of the breed, they’re a fine example of what you might be getting into if you choose to keep a Conti as a pet!

These giants come in 8 recognized colors, as well: black, dark steel, light steel, agouti, red agouti, opal, yellow, and chinchilla. With dense, plush coats and affectionate natures, you may be surprised at just how often they want to be pet and cuddled.

While the standards of rabbit nutrition all apply to Continental Giants, you should be aware that they will need significantly more of all these things. Whereas a single water bottle or dish might be enough for a standard or dwarf rabbit, the consequences of a Conti running dry can be a bit more severe.

With this in mind, try to give a Continental Giant multiple sources of pure, clean water and fresh timothy hay. If you can give them access to this in every room of the house and your yard that they might play in, they’ll be unlikely to ever

As far as nutritional supplements go, it can definitely be surprising how much a Conti can eat! Plan to keep a rather sizeable amount of dark, leafy greens and protein dense kibble on hand, as well as carrots and apples to supplement their often-constant hunger. Because of their significantly larger size, this breed is entitled to a few more treats than other rabbits – just don’t overdo it, since they are prone to serious health issues if overweight.

Perhaps most important, if you’re considering owning this breed: make sure that you have a lot of space in your home, as well as a back yard. Their huge size makes activity requirements very similar to a medium sized dog, which includes regular time spent outdoors running and playing.

While Continental Giant’s coats are easily manageable with a brushing once per week (twice during shedding season), you should be particularly careful to keep an eye on their large and ponderous back feet. Whereas smaller rabbits run a slight risk of developing sores on their hocks, the extra weight carried by this breed can easily contribute to developing sore spots that need to be addressed by a veterinarian.

Loving and kind, Continental Giants are friendly to an extreme and love to play. This includes being taught tricks, as they are quite an intelligent breed of rabbit. Gentle, frequent handling when they are young will predispose them to behavior similar to a dog by the time they’re fully grown, often making them the life of a party.

Final Thoughts on the Continental Giant

It’s easy to be amazed by this gentle giant of a rabbit, and for good reason! Their kind, playful dispositions and larger-than-life proportions have made them the object of desire for many a prospective rabbit owner. While we strongly recommend having previous experience with caring for rabbits before making the commitment to care for a Continental Giant, once you’ve learned to live with them, they make excellent companions.