Which Guinea Pig Breed Is the Friendliest? 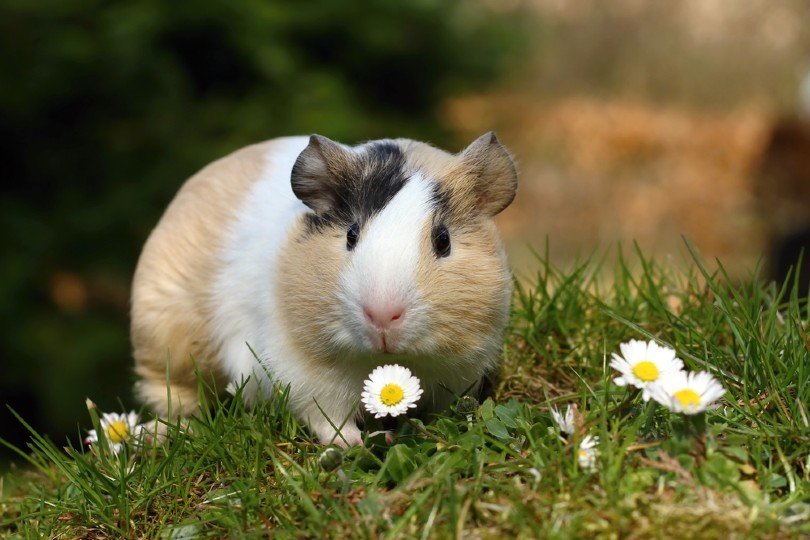 Guinea pigs are small but they can make excellent pets, whatever you look for in a small animal. This is because, while we might think of the guinea pig as being a single species of animal, there are many different breeds. The skinny pig is considered good for those with allergies because of its lack of hair, for example. And, while the guinea pig is a prey animal, so it naturally resists being picked up and handled, there are many exceptions to this general rule.

Abyssinians are very popular pigs because they are popular for showing but they also make friendly pets. While we consider them to be the friendliest, several other breeds are well worth considering because they are friendly, tolerate being handled, and make good pets. Read on to find out more about the Abyssinian as well as other friendly Guinea Pig breeds.

Guinea pigs, also called cavies because of their taxonomic name Cavia porcellus, are small animals but are considered big by rodent standards. They are among the largest of the small pet class, and they are popular as pets because they are as easy to keep as hamsters but are bigger so are considered safer and easier to pet than their hamster counterparts.

Their bigger size also means that the guinea pig will live for around 6 years and while they do have the ability to get away from danger and peril, they are not as difficult to catch as pets like rabbits or the aforementioned hamsters.

Caring For Your Guinea Pig

If you intend to keep guinea pigs, you will need to meet certain standards of care to ensure that your guinea leads a healthy and happy life. Not only does this help ensure that your cavie lives longer but a happy and satisfied guinea pig is more likely to enjoy being picked up and handled.

Ensure that you provide a cage that is at least 7.5 square feet, but ideally larger than this, for a single cage. For two, you should provide a minimum of 10.5 square feet. Extra space means extra room for your rodent to run around and it allows for extra tunnels and toys, too. The cage should be horizontal because cavies do not really climb.

Provide a substrate, such as sawdust. Provide a bed and bedding, hiding spots where your guinea pigs can go to get some privacy. Tunnels, logs, chew toys, and tubes make great additions to your guinea pig’s house, too, because they encourage physical activity and they provide mental stimulation, too.

As sociable animals, guinea pigs benefit from being kept in pairs or groups. As long as the cage is big enough you can keep two male pigs together, or two females, but it is vital to ensure that you offer plenty of space and remember that while they are sociable, they do not necessarily enjoy having to share items and toys.

How Do You Pick a Friendly Guinea Pig?

As well as ensuring that it looks healthy, try to pick a sociable guinea pig that already gets along with people and other cavies. It is possible to rehabilitate an unfriendly or even an aggressive guinea pig, but it is much easier to start with one that already shows friendly attributes. It should be bright and alert, and may initially show some caution when approached, but your potential pet should not be overly concerned when you put your hand in the cage, and it certainly shouldn’t try to bite you.

Is It Better To Have A Male Or Female Guinea Pig?

Male guinea pigs, called boars, are usually a little larger than females. And, while it is possible to keep two males together if you want a group of more than this, you should consider females because they will get along better together. Females, called sows, are usually timider than their male counterparts and this extra bravado means that the male is more likely to come to you and be susceptible to handling. More important than gender is the amount of time you spend with your cavie and the temperament of the individual.

Why Won’t My Guinea Pig Let Me Pet Him?

There are several potential reasons that yours won’t let you pet it. If you have only just got the cavie, it needs time to settle into its new surroundings and to get used to its home and you. If it is adopted, the previous owner may not have handled the pet very often: in which case, it will take some time to show that you can be trusted and to build a bond between pet and human.

To help ensure a friendly pet that likes to be handled, try the following tips:

The Abyssinian is one of, if not the friendliest breeds. It has a medium-length coat and can combine any colors in its eight to ten rosettes. Rosette is the name given to the swirl on your cavie’s coat. This breed is not only friendly and open to handling, but it can be energetic and will play simple games with children, making it a great choice for a family pet.

Other popular and friendly breeds include:

The American guinea pig is widely available: often found in pet stores. It is easygoing and generally quite a friendly little animal. It is easy to care for, too and is considered suitable for owners of all ages and experience levels. This is considered a small guinea pig breed, but the American more than makes up for it by being relatively easy to train and socialize.

The Teddy guinea pig has a wiry coat and its appearance, as well as its cuddly nature, is what led to it being given the name. This breed is popular and can be found in most pet stores. The Teddy may to genuinely enjoy being handled, rather than simply tolerating being picked up.

The Peruvian is a unique-looking cavie, thanks to its long, smooth hair. This friendly little rodent is curious and can be convinced to sit with its owners. Peruvians usually enjoy being handled but they are not the easiest to care for. Their long coat needs regular grooming and attention, otherwise, it can become matted and uncomfortable.

Which Guinea Pig Breed Is the Friendliest

Guinea pigs are very popular pets. They are small enough to keep in most apartments and homes, but big enough that they are not too fragile. They require minimal care, although a breed like the Peruvian does require a lot of grooming to ensure that its coat remains healthy and comfortable. With a life expectancy of approximately 6 years, they live longer than smaller animals like hamsters and even rats. Cavies are also sociable animals and they not only enjoy living with another companion guinea pig but they usually enjoy being picked and handled by their humans.