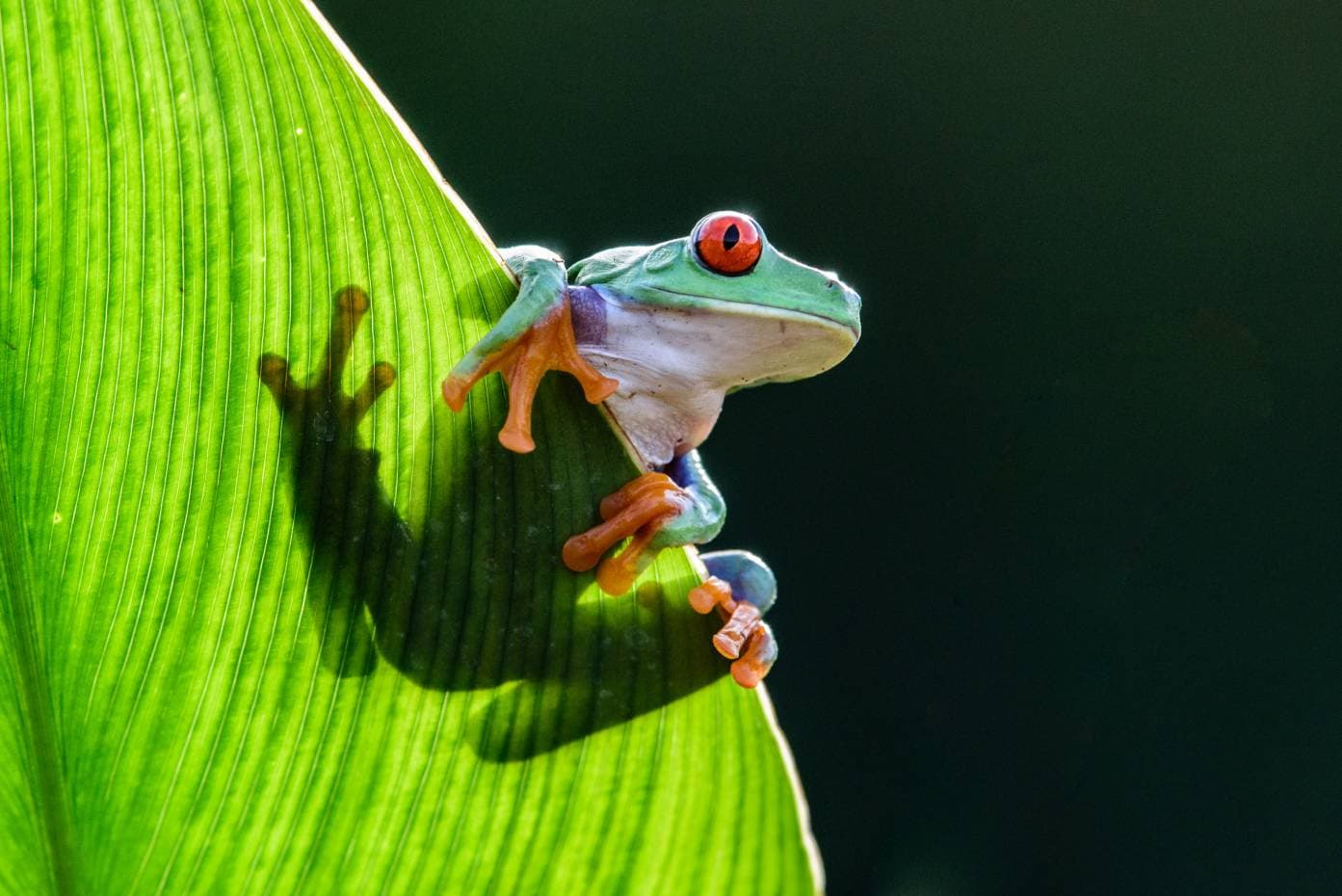 If you’ve ever had a tree frog as a pet, you know that they hop right into your heart and quickly become one of the most beautiful pets you’ve owned. The Red Eyed Tree Frog is known for their crimson red eyes, slim bodies, and bright bodies to scare warm their prey.

Red-Eyed Tree Frogs are one of the most well-known frog species in the world. These animals come from Central and South America and spend their days bouncing from tree to tree in the rainforests. Red-Eyed Tree frogs don’t have a lot of demands, and it makes them a fun and unique pet to have.

You’d find Red-Eyed Tree Frogs throughout Veracruz, Nicaragua, Panama, Costa Rica, and some Northwestern parts of South America in the wild, so why did somebody decide to bring these frogs to North America? Tree frogs are an arboreal species, so they spend a large portion of their lives in trees. Their vivid green bodies with unique markings are captivating to look at, and most frog owners enjoy watching their behavior.

Red-Eyed Tree Frogs are nocturnal and are primarily awake at night, but that doesn’t mean you won’t get to see how they move and explore their enclosure. Tree frogs get a little skittish with too much handling. After all, they are prey for a number of different animals, but you still get to observe them close up and handle them from time to time. On average, they live for eight years in captivity, and they make a good companion if you want something that is relatively easy to care for and will last longer than more traditional pets. If you’re a lover of frogs, snakes, or lizards, the Red-Eyed Tree Frog might be an animal you consider bringing into your home.

How Much Do Red-Eyed Tree Frogs Cost?

Before you even consider buying a Red-Eyed Tree Frog, do as much research as possible to get a complete understanding of the type of animal you’re working with and what their needs are. Get information from valuable sources like pet store personnel or professionals who work with these animals every day. If you’ve made up your mind, search for a reputable seller and be prepared to travel a little way to get them. It is possible to buy these frogs online, but we recommend finding a local pet store that specializes in reptiles or amphibians.

A Red-Eyed Tree Frog costs anywhere from $40 to $200. Shop around to find a cost that seems reasonable for your budget and ensure that the frog is healthy before bringing them home.

Red-Eyed Tree Frogs are nocturnal and spend a good majority of the day resting. If they spot a predator or get startled, their eyes pop open to startle the predator, and then they quickly hop away to safety in a nearby hiding spot.

These frogs make the most noise when they are performing their mating song. The men perform loud croaks to attract females, but this is rare for those in captivity. These frogs aren’t fans of being handled too much. Four or five minutes is more than enough for them, so refrain from buying one if you want something you can play with and hold.

The big, red, bulging eyes are the first indicator that you’re looking at a Red-Eyed Tree Frog. These frogs have advanced defense mechanisms, and their coloring helps them blend in with their surroundings and warn predators who get too close. When they close their large eyes, their green eyelids help them blend into the green leaves of the rainforest. When they open them, the crimson red color of their eye bulbs surprises those who are close. However, their eyes aren’t the only interesting thing about them.

Tree frogs have lime green bodies with hints of yellow and blue on their sides. They can change their whole coloring based on their mood and some appear a darker green while others turn reddish-brown. Red-Eyed Tree Frogs have white undersides and their feet are bright orange and red. Their footpads make them excellent climbers, so they spend a lot of time clinging to the bottom of leaves during the day and hunting for insects at night.

How to Take Care of a Red-Eyed Tree Frog

The most important thing about owning any kind of animal is ensuring that they have everything they need to live a comfortable life. This is even more true for those who have been taken out of their natural environments and moved to a location where they wouldn’t survive in the wild. Unless you live in a rainforest, keep their terrariums as close to their natural habitat as possible.

If this is your first time handling a Red-Eyed Tree Frog, there is some basic knowledge that is crucial for giving your frog a healthy life. Follow these instructions before bringing your frog home so that you can put them in their tank right away.

Even though Red-Eyed Tree Frogs are relatively small, only about an inch or two in length, they still have to have lots of room to move around. Even with one single tree frog, they require a terrarium that is a minimum of 15 to 20 gallons. Because they spend their lives in the canopies of the rainforest, they prefer tanks that are taller instead of wide.

Choosing the substrate to go inside the tank is one of the easiest choices you will make. If it is in your budget, orchid bark and shredded coconut giber substrate are two excellent options for a substrate. However, moist paper towels are a cheaper option that helps the tank stay moist. They don’t look the best, but it gets the job done when in a pinch.

You can’t deny a Red-Eyed Tree Frogs desire to climb. Their habitats must have broadleaf plants, sticks, and substrate for them to climb and rest on. Live plants like alocasia, philodendron, and chlorophytum are some of the most popular choices. Because they are alive, you have to use lights to keep them going. For branches, use a combination of driftwood, bamboo, and cork bark.

Lighting is crucial to the overall health of your frogs because they require UVB lights to assist in absorbing vitamin D and calcium. We recommend using Zoo Med Reptisun lamps with the addition of an LED bulb to give them both light and heat. Put a digital thermometer in the tank to keep daytime temperatures between 75°F and 80°F and nighttime temperatures around 70°F.

Do Red-Eyed Tree Frogs Get Along with Other Pets?

Red-Eyed Tree Frogs are used to being prey and they are nervous because of it. If you have a home with a lot of other pets, we don’t recommend allowing them near your frog’s tank. With that said, tree frogs are okay with being put with other tree frogs. They are social animals and keeping two to four frogs in one tank is okay as long as their terrarium is large enough to give each one its own space.

What to Feed Your Red-Eyed Tree Frog

Insects are the main food source for the Red-Eyed Tree frog. Crickets are the staple in their diets, but they do like treats here and there. Silkworms, hornworms, and roaches are all insects that your tree frog enjoys eating on occasion.

Diet supplementation and hydration are two key components to keeping your tree frog healthy. Red-Eyed Tree Frogs do best when they have vitamin D, calcium, and other multivitamins in their diet.

Tree frogs stay hydrated not only by drinking water but by absorbing it through their skin. Keep a large, shallow dish of fresh water in their habitat and make sure it is large enough for them to lounge in but not so big that they have to swim in it. Wash the container and refill the water on a daily basis. Do not use tap water since it contains chemicals that they could absorb.

Replicating a frog’s natural environment is crucial if you plan on breeding them. You have to mimic the winter months of the wild and transition them into the springtime for them to be ready to mate. This is achieved by placing them in a rain chamber with tropical plants above the bottom. Decrease the temperature by 5 degrees to mimic the winter and reduce their daylight by one or two hours. Once you’ve done this for one or two months, turn on the rain chamber and keep it at 80°F. Increase the temperature and daylight back to normal.

Ensure you have both the male and female frog. The females are larger than the males, and the males have brown pads on the bottom of their footpads. The males soon start croaking to attract the females and the mating usually takes place within a week. Females lay their eggs on leaves that overhang the water in the rain chamber and they quickly develop into tadpoles after one week.

Are Red-Eyed Tree Frogs Suitable for You?

The Red-Eyed Tree Frog is a good pet choice for you if you are looking for something that is a commitment but doesn’t have to be handled all the time. Frogs aren’t something that you’ll be picking up and snuggling with. Instead, people own them because they enjoy watching them move around their terrarium and appreciate their beauty from a distance.

Red-Eyed Tree Frogs aren’t demanding pets, but they do require you to care enough about them to feed them and keep their home clean and humid. If you give them a good environment, they live happy lives and are a one-of-a-kind animal to have.