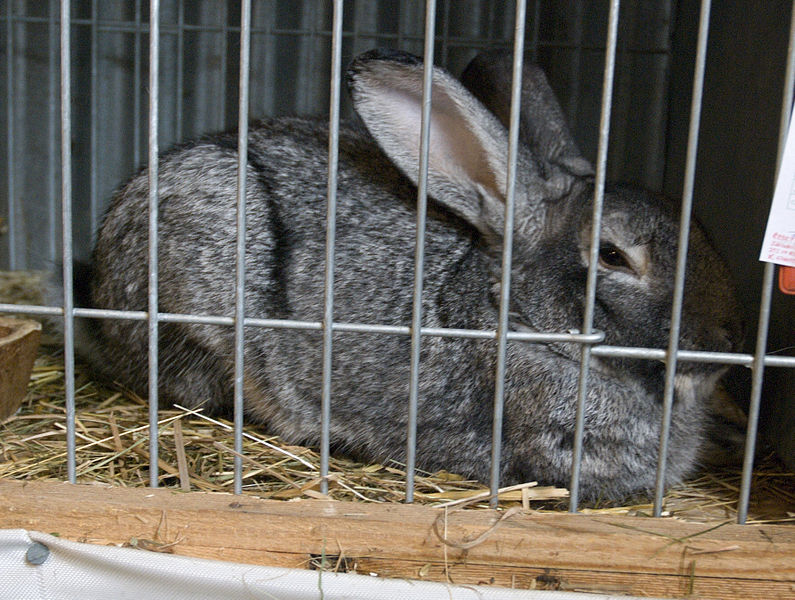 The first of all the rabbit breeds we know today as “Chinchillas”, the Standard Chinchilla also weighs in as the smallest of the 3 breeds recognized by the American Rabbit Breeders Association. First discovered in France under hotly debated breeding conditions, these lovely rabbits are named after a South American rodent whose fur they very closely resemble.

In today’s article, let’s explore the history and origins of this once incredibly popular breed! While they can be difficult to find for sale today outside of dedicated breeders’ clubs, we’ll also be covering helpful tips and hints for their care and grooming.

So, if you’re ready to learn more about this uniquely colored rabbit breed with a storied past, let’s get started!

History and Origin of the Standard Chinchilla Rabbit Breed

A post shared by M an' M Rabbitry (@manmrabbitry)

In the age of continuing European exploration of South America, happening upon the diminutive rodents known as “chinchillas” would change the European garment industry forever. With their dense, thick, and lustrous pelts, these small animals immediately became highly sought after as coats for nobility in Europe – so much so, that they were nearly hunted to extinction by the end of the 19th century.

With the Chilean government banning any further hunting of chinchilla rodents, a French rabbit breeder sought out a different solution: To produce a rabbit with a coat almost identical to the South American natives.

By somewhat random chance, a blue doe and agouti buck of uncertain breed produced a litter that was then crossed with Himalayans and an English breed known as a Black and Tan. As early as 1913, the first Chinchilla Rabbits had been created – leading to their immediate adoption as a valuable and desirable garment material.

Thanks to their uniquely colored, densely textured fur, Chinchillas became the rabbit of choice for breeders across the United States and Europe. While World War II threatened to decimate any interest in their breeding, dedicated clubs of breeders and fanciers have kept the breed alive to this day.

Every Chinchilla rabbit breed is most immediately recognizable by its fur: A rich blend of earthen colors (brown, chestnut, tan) are mixed in bands with white, blue, and black. The Standard Chinchilla is furthermore distinguishable from other Chinchilla breeds by its pearly eye bands, forming white circles around its dark eyes.

Smaller and more compact than the other two Chinchilla breeds, Standard Chinchillas are slightly more delicate and fragile than their descendants. This, combined with their mild nature, makes them very suitable as pets for owners with previous rabbit handling experience.

Standard Chinchillas require the same sort of diet as most domesticated rabbits: Plentiful timothy hay and filtered water, combined with daily servings of leafy greens and rabbit kibble to round out their nutrient intake.

Though smaller than the other Chinchillas, they still need plenty of space to stretch, move, and run around. Their smaller size tends to make them more active, so litter training them is an essential step in giving them free run in the house.

A post shared by M an' M Rabbitry (@manmrabbitry)

The rich and lustrous coats of Chinchilla rabbits can require more care and attention in their grooming than other breeds. Expect to brush them at least twice weekly throughout most of the year, and more often during their shedding season in the springtime.

Kind and mild-mannered, Standard Chinchillas have been chosen as the basis for further breeding for good reason. Their gentle temperaments make them especially inclined towards being handled and groomed, positioning them perfectly as house pets. With consistent handling from birth, they’re likely to end up spending all their time near their owners – a truly constant companion.

Though they may not enjoy the popularity in the United States that they once did, Standard Chinchillas – and indeed, all the Chinchilla breeds – still make fantastic pets. If this breed strikes your fancy, look for a Chinchilla Rabbit Breeder’s Club in your area to inquire about getting one for your home.

Thanks for reading today! If you’re curious to learn more about this and other breeds, we strongly recommend Lynn M. Stone’s Rabbit Breeds: The Pocket Guide to 49 Essential Breeds and Bob D. Whitman’s Domestic Rabbits and Their Histories, both of which we’ve used as references while writing this article.