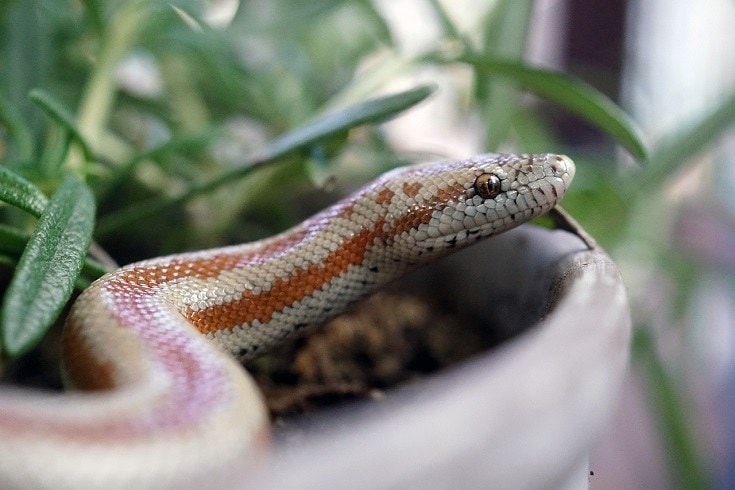 While some people are utterly terrified of snakes, there are some varieties out there that just might change your mind.

There are so many snake species out there that make great pets. But what are the best snakes for beginners?

Choosing your first snake can be a bit of a doozy. Snakes often require very specific heat and humidity requirements that can be difficult to maintain. Fortunately, some species are much easier to care for than others.

Let’s take a look at the nine best snakes for beginning herpetologists!

The 9 Best Pet Snakes for Beginners

The Corn Snake once held the title of “Most Popular Pet Snake Breed” before the coveted Ball Python came around. And it’s pretty simple to see why. Corn snakes are relatively docile creatures that are super easy to handle and care for.

They don’t grow to enormous sizes, staying between 2-6 feet in length; however, they can live a very long time. Corn snakes—if properly cared for—can live over 20 years. They do require a rodent-based diet which may be a bit off-putting for some future snake owners.

The California Kingsnake is another great pet snake for beginners. They derive their name “kingsnake” from their tendency to kill and eat other snakes—including rattlers—when in the wild. They only grow to about 3-4 feet in length and are fairly easy to care for.

But they’ve been known to get a bit nippy if not handled enough. That’s just their way of letting you know they need more love! When it comes to feeding, they’re not overly picky. They’ll eat rodents, lizards, birds, and even other snakes. It might be best to keep this guy in his enclosure.

If you’ve ever spent any time in a garden, there’s a good chance you’ve run into a garter snake. And while it may be a bit scary when you run across them, they’re extremely good pets. There are several species of garter snakes out there with different feeding habits. However, most garter snakes live off of an earthworm or fish-based diet.

Garter snakes can also be among the smelliest of snakes. This is because they excrete an oily, smelly musk whenever they get stressed.

The Rosy Boa is another docile snake and great beginner snake choice. Although not as popular as other snakes, they’re still revered by collectors for their mild temperament and long life. Rosy Boas can live up to +25 years in captivity.

Rosy Boas are also one of the escape artists of the snake world. You need to be extra careful when building the right enclosure for them. Because if there’s a way out, they’ll find it. They also live off of rodent based diets, but they prefer thawed frozen mice compared to live ones.

The Ball Python is the most popular choice of pet snake available today. They can also be among the largest of the beginner snake choices. With the females of the species growing up to 5 feet in length—the males are considerably smaller—they should have large enclosures and heavy ceramic bowls big enough for them to soak in.

Ball Pythons live off a rodent-based diet and can live for over 30 years if properly cared for. Out of the other snakes on this list, Ball Pythons have a few specific care requirements including much more stringent humidity concerns. But they’re still relatively easy to care for.

Sand Boas are smaller versions of their larger constrictor cousins and great beginner snakes for first-time owners. They are relatively tame snakes and grow even more docile with frequent handling.

There are several species of sand boa on the market; however, the Kenyan Sand Boa is the most popular. But don’t expect them to be super active or out and about. They prefer to spend most of their time chilling underneath a nice level of substrate in their enclosures.

These are among the smallest snakes on our list. Ringneck snakes draw their name from the necklace-like ring that’s found near the base of their heads. They’re also venomous. However, their venom is extremely mild and only the largest of the species can effectively bite humans.

Ringneck snakes instead prefer to eat elongate ectotherms. This means that they’ll thrive on an earthworm-based diet.

Aside from garter snakes, brown snakes are among the most commonly encountered snakes you’ll come across in the wild. And while they’ll probably slither away before you can get to know them, they make for very good pets and a great beginner’s choice.

They live on a diet primarily of snails, slugs, and earthworms, making them much easier to feed than mice for squeamish owners. But despite their wonderful nature, these snakes are often difficult to find captive-bred.

Both of these snakes remain relatively small and don’t need to rely on a heavy rodent-based diet. They’ll thrive on crickets and other insects. These snakes aren’t too aggressive either. But they don’t care for being handled too often and will get stressed when it happens.

Snakes may be some of the most feared creatures on the planet, but often they’re just misunderstood. They can make for excellent pets provided you give them the right environment.

However, some snakes will be more temperamental and trickier to raise. But the ones we’ve listed here are pretty straightforward for beginners and perfect for getting started with snake raising.