Congo vs Timneh African Greys: What’s the Difference? (With Pictures) 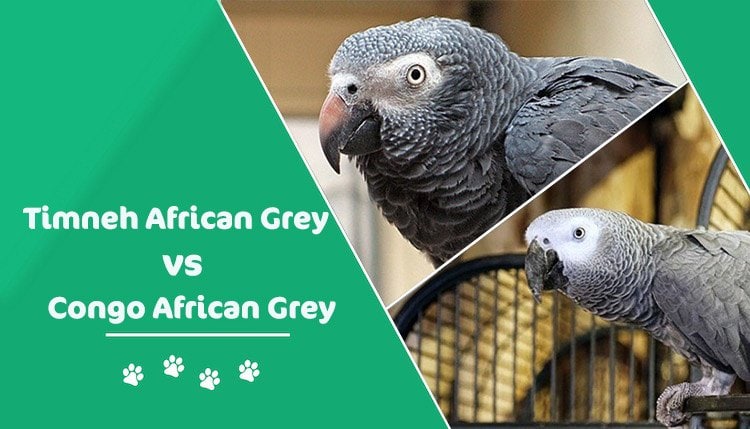 Although the Congo and Timneh African Grey parrots do both come from Africa, they hail from different regions of the continent. They are different sizes and have slight color differences. Both are intelligent birds, however, and will bond with their humans.

It is the Timneh that is considered the calmer of the two breeds, and they are less likely to suffer from anxiety and stress-related illnesses. Although there are some differences in the way they mimic, both breeds are known to be effective talkers. The more quickly maturing Timneh is the most likely to talk from a younger age, however, and will usually be able to string together a sentence by the time he reaches 6 months of age.

The Congo African Grey is considered a large parrot breed and is especially popular because he is friendly and can be affectionate, but also because he is known to develop a good vocabulary with minimal training and encouragement. The Congo is the bigger of these two breeds.

The Congo African Grey will grow to approximately 14 inches tall and weigh 1 pound. The Congo will usually fall somewhere between dark to light gray and will have a solid black beak. He will have bright red tail feathers.

These birds are intelligent but cautious. They will form a bond with their human caregiver, and the Congo African Grey will normally prefer a single human rather than bonding closely with all family members. However, considering he will live for 50 years, this may change over time, and your Congo African will integrate into your family.

One of the reasons that people buy African Grey parrots is for their ability to talk. The Congo is considered a very good talker. With very little encouragement, he will mimic not only the words of the person he speaks to but also the pitch and tone of the person’s voice. He may not start speaking until he is 12 months or older, however, but can learn many words and sentences throughout his life.

The Congo is more prone to stress and anxiety-related health conditions. In particular, this means that he is more susceptible to chewing his feathers and skin, something that you will have to keep an eye on.

The Congo African Grey is a popular African Grey parrot and is a decent size and a good talker. However, he is considered more difficult to care for, not least because he is prone to some nervous and anxiety-related health problems. As such, this bird is better suited for experienced bird owners, and because he prefers to bond with a single human, he is better as part of a small family rather than a large group.

The Timneh African Grey is similar to the Congo in a lot of ways, however, he is smaller, less anxious, and will learn to talk sooner than the Congo. He may be considered easier to care for and will make a good and caring pet for whole families and not just for individual human owners.

The Timneh African Grey is smaller than the Congo. He will grow to a height of approximately 10 inches tall and will weigh around 10 ounces when he is fully mature. The Timneh is darker than the Congo, too, usually a charcoal grey. He has a pink upper beak and dark red tail feathers.

Like the Congo African Grey, the Timneh is considered very intelligent and equally cautious. He will bond with his humans and is more likely to bond with the whole family. He can show affection to several different people within the same group, which can make him a better choice for larger families and groups of people.

The Timneh is likely to learn a similar number of words and sentences to the Congo, but he will start to speak sooner. You should expect this breed of Grey to speak from the age of about 6 months, and he will develop his own voice rather than mimicking that of the person he is speaking to.

The Timneh African Grey is a large African Grey parrot that will bond with several people, potentially all family members. He is clever, will speak early, and will learn many words and sentences over his life. He is confident and less prone to anxiety than the Congo African Grey, and this combination makes him a good choice of bird for families, as well as for novice African Grey owners that want a talkative little bird.

Which Breed is Right For You?

The Congo and the Timneh are breeds of African Grey that share a lot of similarities. In particular, they are both chatty little birds and are considered very intelligent. However, they also have several differences. The Congo is bigger, less likely to bond with secondary and additional family members, and is considered better for the experienced owner. The Timneh is smaller, more confident, and will start talking from a younger age, and he is widely considered a good breed for novice African Grey owners.