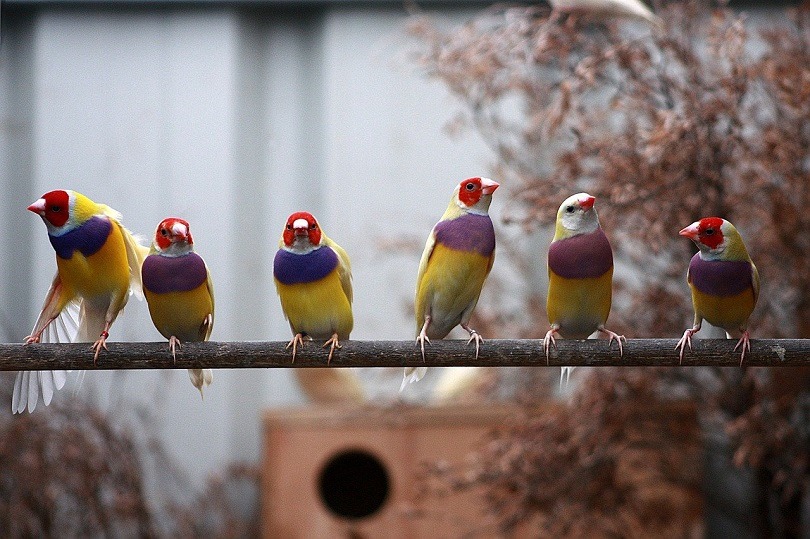 Many people are put off from owning a bird because they often think of these pets as obnoxiously loud. However, this doesn’t always have to be the case. Certain species keep most of their songs to themselves or like to chatter quietly.

These birds are among the quieter species kept as pets. Remember that there is no such thing as a completely silent bird. It is in a bird’s nature to have a song or vocal manner of communication. If sound bothers you or a housemate that much, then you might want to consider adopting another type of animal companion.

If you want a quieter bird but are still prepared to hear from them once and a while, these seven birds could make a good choice for you.

Before adoption consider each bird species and their:

Ensure that you are ready to care for your bird for however many years that they live, giving them the right amount of space to thrive in and committing time each day to interaction.

If you think you are ready for adoption, here are the top seven quiet pet birds.

Parakeets go by quite a few names, depending on where they are from and who is talking about them. They are also commonly called Budgerigars, or Budgies, for short. These birds do have the capacity to learn how to speak, like the larger parrot species. However, they have much quieter voices and are not capable of screaming loudly like parrots.

Parakeets are sweet birds with a voice that matches their personality. They will happily chatter and warble quietly to themselves as they play in or out of their cages. Many people find this gentle background chatter comforting and don’t mind the small amount of noise that their company makes.

These parrots can talk, and you can train them to say certain things if you work hard at it. Unlike certain large and medium-sized birds, these feathered friends have less of a tendency to screech when they want to be heard. They just want to sit with their people and socialize or hang out with their favorite toys.

When most people think of keeping birds as pets, they think of parrots and related species. However, common birds like doves can also make great pets. These birds rank high on the list for quiet avian pets because they make such a gentle noise. The only issue is that as long as the bird is awake, their soft cooing rarely stops.

Doves are simpler birds than parrots and easier to keep entertained. They are more easygoing pets than some of the intelligent and easily bored species on this list. They do not scream or make loud noises, and you can’t teach a dove how to speak. They are one of the largest species on our list.

Cockatiels are a bit of a grey area bird, as they are larger than a finch or a parakeet but also slightly louder than them. They can be quite vocal, but their noise level doesn’t often become bothersome because they mostly whistle and chatter to themselves.

Cockatiels are brilliant birds. They spend much of their time playing with their favorite toys, and when they hear noise going on around them, they are likely to try and mimic it. Cockatiels happily spend hours learning how to whistle their favorite songs or pick up the household’s noises.

While these tendencies can be endearing to some people, other people will find them annoying. If you are simply looking for a bird that won’t screech at you but still talks, these little birds might do the trick.

These sweet little birds are perhaps the perfect match for someone looking for a quiet feathered partner that doesn’t need much attention or maintenance and isn’t easily noticed. Finches are tiny birds and they have little voices to match. They make little chirps and peeps while awake, but these are easily ignored since they are so soft and gentle.

Zebra finches are the most common finch to be kept as a pet because they are beautiful and low-maintenance. They are hands-off with their humans and prefer to be left with their partners in their enclosures. Ensure that they get enough time to exercise, and they will be happy as a very quiet clam.

Canaries have been kept as pets for centuries. They are beautiful, golden yellow birds that are members of the finch family. They need plenty of room in their enclosure to fly around, and similar to other finch species, they don’t appreciate too much handling.

These birds appreciate being solitary. Even with their seemingly gentle exterior, they are known to fight roughly, especially if two males are kept in the same enclosure. Canaries are known for their sing-song melodies, but their small size dictates a small voice. Even if they spend part of the day singing, it is difficult to be noticed by or distract most people.

Parrotlets are similar to a mini version of a parrot. They are covered in all kinds of bright colors, and there are quite a few different varieties that you can choose from. They are small birds but full of energy. Parrotlets have a personality that contrasts their small physique, as they are a whole lot of bird packed into a tiny package.

Parrotlets are among the best birds for apartment living because they are quiet and don’t demand much space. They are unable to screech or scream like parrots. Instead, they will softly chirp to themselves or to you to try to communicate. They do enjoy plenty of interaction and are generally quite affectionate, forming close bonds with their owners.

Now that you have a list of birds from large to small and quiet to very quiet, there are a few species that you should try to avoid.

Most parrot species are not going to be a good option for a home that needs quieter pets. These include birds like macaws, African greys, and the Amazon parrot. Cockatoos and conures are other birds commonly found on the “loudest pet birds” list.

Although some of these birds might be beautiful and tend to be the larger species, don’t be drawn in by their brilliant plumage. Select a bird with the right kind of noise level and personality for you if you want to keep them in a happy home.