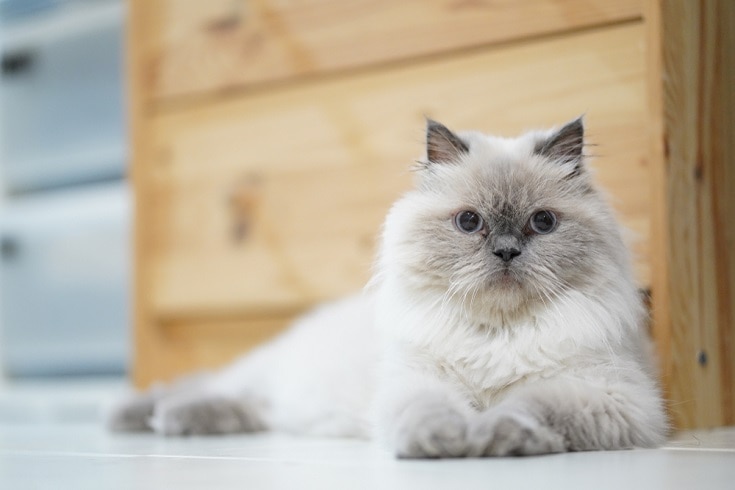 There’s something acutely attractive about flat-faced pets. It’s not just felines either; think of popular pooches like Pugs and Boston Terriers. Something in humans is just enamored with flat faces. As such, it’s no surprise that many of the flat-faced cat breeds are some of the most popular felines around. People are drawn to those smushed, flat faces, no matter what creature it’s on. Often, it seems that the flatter the face, the more popular the cat!

Most cats don’t have flat faces, but we’ve found 10 breeds that do. These breeds all share the same trait that causes their faces to appear smushed, but that might be all they have in common. While these cats might not be as iconic as “Grumpy Cat,” they’re each popular pets with brachycephalic mugs that earned them their position on this list.

First developed in Louisville, Kentucky, in 1958, the Bombay cat looks like a miniature black panther, which is exactly what its maker, Nikki Horner, was going for. Ironically, this breed was created around the same time in both America and the United Kingdom. The American Bombay was created by crossing a black American Shorthair with a sable Burmese, while the British version was made by mixing a Burmese and a black domestic shorthair. Despite the difference in genetics, the American and British Bombay cats look practically identical and share similar personalities.

British Shorthairs have been around for a long time. It’s believed that they were first to England with the Romans while they were invading in 55 BC. It wasn’t until the late 1800s though that the breed was truly developed by one determined breeder named Harrison Weir. The breed was first displayed in 1871 at a cat show at London’s Crystal Palace. Soon after, the breed was further developed by adding in additional breeds, including Persian, Russian Blue, and French Chartreux cats. About a hundred years later, the British Shorthair was globally recognized in the 1970s.

Medium-sized cats that weigh more than you’d expect given their size, Burmese cats are kittens that never grow up. These are animated cats that are always showing off with their antics intended to impress you. They’re as playful as cats come and always love to entertain their family as the center of attention. Though the appearance of the Burmese cat has evolved over the years, all Burmese cats can be traced back to a single cat named Wong Mau, which came to the US with Dr. Joseph Thompson from Rangoon, Burma; a region now called Yangon, Myanmar.

New to the scene and rarely seen, the Burmilla is a cat you may not be familiar with. It’s still considered an experimental breed in Britain and it hasn’t been accepted to the major US registries, so the Burmilla is sort of in a no cat’s land. This breed was created when a Lilac Burmese female and a Chinchilla Persian male accidentally bred, creating four offspring with unusual coloration. A breeding program was then created to reproduce the coloring of these offspring with the short hair of a Burmese, and the Burmilla was created.

Exotic Shorthairs tend to be rather docile creatures that prefer not to expend too much energy. They do love to play, though they spend plenty of time sleeping to recover between short bouts of play. Their short coats make them easy to care for, and they’re known as affectionate companions that want lots of your attention.

Himalayans are calm cats with distinctly flat faces. They’re very similar to Persians and would be hard to tell apart aside from the colorpoint markings that the Himalayan sports. The breed got its start in the 1930s when Harvard researchers were studying to combine the traits of Persian and Siamese cats. Newton’s Debutante was the name given to their first successful Himalayan.

Tiny cats with stunted legs and smushed faces, Munchkins have a unique appearance that’s unlike any other feline. Affectionate and energetic, this dwarf breed makes a great companion pet. They’d actually be normal size if it weren’t for their abnormally short legs. In essence, Munchkins are the Dachshunds of the cat world. Their strange appearance is the result of a genetic deformation, making the reproduction of Munchkins a complicated and difficult process compared to standard cat breeding.

Persian cats are probably the quintessential flat-faced feline breed. It’s one of the breed’s trademarks; particularly present in show Persians. But Persians are known for more than just their appearance. These cats are beloved for their affectionate temperaments, making them the ideal lap cats. They’re also quite communicative, with soft and pleasant voices that everyone loves to hear.

Scottish Folds are one of the most instantly recognizable cat breeds of all time. Aside from their flat faces, these cats also display ears that fold flat to their heads. This is caused by a genetic abnormality that was discovered in a single cat from a litter of kittens that were otherwise devoid of such deformations. That cat was named Susie, and all Scottish Folds today can trace their lineage back to her.

The Selkirk Rex is another feline with an immediately recognizable appearance. These cats have curly locks covering their bodies; a stark contrast from the straight coats donned by most cats. Another interesting fact about this breed is that they’re the only breed named after a person. Jeri Newman is responsible for the breed’s creation, and Selkirk was the name of her stepfather. After six kittens were born in an animal shelter, a unique curly-coated cat was brought to Newman, who bred the cat with a black Persian, creating three curly-coated cats. The breed was later mixed with several other breeds to create the Selkirk Rex we know today.

Why Do Some Cat Breeds Have Flat Faces?

You might be surprised to find out that those flat faces on your favorite feline breeds are actually a deformity of sorts. Cats with flat faces have a condition called brachycephalic syndrome. How this condition affects different breeds and individuals can vary, but flat-faced felines all have this syndrome.

So, what is brachycephalic syndrome? Well, cephalic means of or relating to the head, and brachy means short. So, essentially, brachycephalic cats have heads and faces with shorter bones than normal. This changes the relationship between the bones of the face and other soft tissues.

Because of the altered bone structure that brachycephalic breeds face, physical problems are common in these cats. Most often, these issues will affect the cat’s breathing. Other common abnormalities caused by brachycephalic syndrome include everted laryngeal saccules, elongated soft palates, stenotic nares, and hypoplastic trachea. Affected cats could experience none, one, or several of these issues.

Of course, it’s completely possible for cats of a brachycephalic breed to display no major health concerns related to their condition. Some of these cats will live long, healthy, happy lives with no adverse effects, even though you can visually see the flat face that’s associated with this condition.

Despite the fact that these breeds have flat faces due to a medical condition, flat-faced felines are in high demand. These popular pets are wanted for their facial deformities, which many people view as attractive; even adorable. Thankfully, many brachycephalic breeds don’t experience too many negative health effects as a result of their condition. Even still, if you plan on adding one of these flat-faced breeds to your family, you should do your research and take care to find a competent and reputable breeder to ensure that there aren’t any complications with your cat.