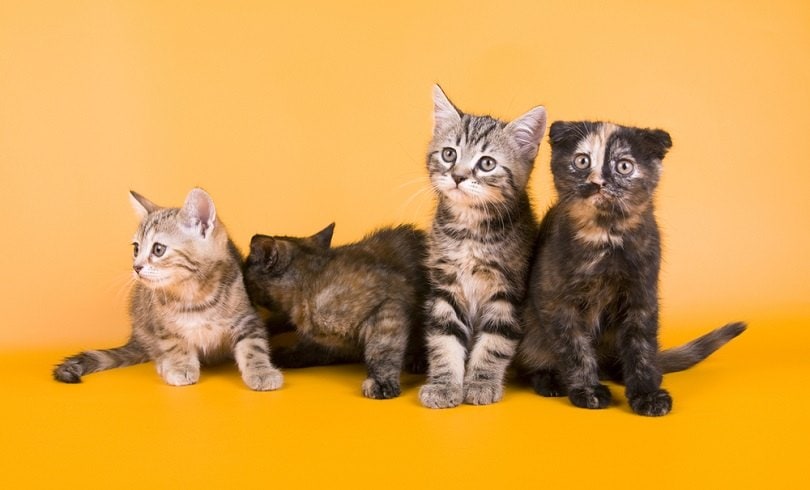 If you’re looking for an unusual cat breed, then you might already have started researching designer breeds. These cats are also sometimes called hybrids, as they’re created by crossing two or more other cat breeds to create a whole new breed!

We’ve rounded up our 15 favorite designer cat breeds to give you a bit of inspiration. Some of these are well known and have been established designer breeds for a long time. These are usually accepted by one or more of the breed registries. Others are still in the experimental stage, so it’ll be a few years until they can be registered with the large breed associations like The International Cat Association (TICA) and The Cat Fancier’s Association.

Due to their rarity, designer cat breeds are often more expensive than natural breeds, and you’ll need to take the time to find a reputable breeder.

The striking Savannah cat is the result of breeding a domestic cat with a wild African Serval. They were first bred in the 1980s but are still slightly controversial and not accepted by all breed organizations. They’re quite rare and need a specific type of home. They can be friendly with their families but are also known for their dislike of strangers. These cats can be assertive and need plenty of enrichment in their home environment. They can jump incredibly high, up to 8 feet! They may get along with kids but need careful socialization first.

This breed first came about through a crossing of chinchilla-colored Persians and lilac-colored Burmese cats. They belong to the Asian Group, which were bred in an attempt to create new breeds similar to the Burmese but in colors not usually found within this breed. Tiffanie cats are affectionate and friendly. They crave human attention, so they need to belong to a house where people are home most of the day. They’re talkative too, so expect to be told when your cat is hungry, wants to play, or would like attention!

Unlike most other designer cat breeds, the Scottish Fold is slightly different in that they’re the result of a genetic mutation that occurred in the 1960s. These cats have ears that naturally fold forward. They have a short and dense coat and are friendly yet independent. It’s been discovered that the gene mutation that causes the ear cartilage to fold forward can also cause degenerative joint diseases, so these cats may need above average healthcare as they mature. It’s also thought that this could be a reason that this breed is fairly low energy.

The distinctive Bengal is possible one of the best-known designer cat breeds. The original crossing between a domestic cat and a wild Asian Leopard Cat, the Bengal is the only cat breed to have a metallic sheen to their fur, making them sparkle in the sunlight. This breed is active, talkative, intelligent, and somewhat demanding! They are a large breed and can weigh up to 15 pounds once fully mature. They can suffer from autosomal recessive disorder, so be sure to ask any breeder for more information and if they have had their parent cats tested for this disease.

The Dwelf is a hairless designer cat breed, created by breeding the Munchkin, American Curl, and Sphynx breeds. The Dwelf breed is controversial because they can often develop skeletal issues. They have short legs due to their Munchkin heritage, which includes the gene for achondroplastic dwarfism. Their hairlessness also means they need additional help to stay warm, so they definitely need to be kept as an indoor cat. Dwelf cats are extremely sociable and need to have regular companionship from their families.

Oriental Shorthair cats have long, slender, and elegant bodies with distinctive large ears. The breed was created by crossing Siamese cats with other shorthaired breeds to introduce new colors. This breed can now be found in more than 300 different colors! Oriental Shorthairs are vocal, affectionate, and a little demanding! They prefer to live in a home where their humans are home as often as possible, mostly so you can meet their every demand! Oriental Shorthairs can suffer from progressive retinal atrophy and lymphoma, so make sure you take the time to find a reputable breeder who carries out comprehensive health checks.

The Ocicat history includes the Abyssinian, Siamese, and American Shorthair breeds. While they do resemble a wild cat in terms of their coloring, they don’t actually have any wild ancestors! Silver Ocicats are one of the most popular colors, thanks to their beautiful spotted coats. Ocicats have playful and inquisitive temperaments and love to spend time investigating their surroundings. You’ll need to provide plenty of enrichment for this breed to keep them entertained. They are larger than the average domestic cat breed.

The Chausie cat breed was first developed in Egypt in 1960. The breed was created by crossing domestic shorthair cats with wild Felis Chaus cats found in the jungles of this area. Despite having wild cat DNA, Chausie cats are affectionate and friendly with their families. They have an elegant and svelte body shape. Life as an indoor cat is best for a Chausie, as they can be tempted to wander too far when allowed outside. Chausies are accepted by TICA as long as they’re four generations removed from their wild ancestors.

The stunning Burmilla breed belongs to the Asian Cat group. The breed was created by an accidental breeding in 1981 between a female lilac Burmese with a male chinchilla Persian. The resulting kittens resembled Burmese cats in looks and character but had the distinctive chinchilla-colored silver coat. The breeding was then repeated, and the Burmilla breed came into being! These chunky and muscular cats love human companionship and can be quite talkative when they want something!

The Toyger was specifically created to try and replicate the striped coat of a real tiger! During the 1980s, breeders made selective crosses between Domestic Shorthair mackerel striped tabbies, Bengals, and tabbies imported from India, until the resulting kittens displayed a distinctive and bold coat. The Toyger was created by Judy Sugden, the daughter of Jean Mill, creator of the Bengal! They are still an extremely rare and expensive breed but are now recognized by TICA.

Created by crossing two unusual breeds, the Jungle Curl and the Desert Lynx, the Highlander or Highland Lynx was developed in 1993. They have curled ears, a short bobtail, and muscular bodies. They can sometimes have polydactyl paws. They may look a little like a wild Lynx but are actually incredibly people-oriented. They’re confident and playful and love to spend time exploring their surroundings.  They also love water, so watch out if you have a pod, pool, or bath, as you may find your cat playing in the water!

The Havana Brown is sometimes also called the Chocolate Delight or Brownie, thanks to their rich brown coats. This breed was created in the 1950s by crossing a Siamese with a black Domestic Shorthair, with the intention of creating a cat with all the physical characteristics and temperament of the Siamese but with a solid dark-colored coat. Havana Browns are also related to the Oriental Shorthair breed. They are affectionate, playful, and frequently compared to puppies due to their love of following their owners and trying to get you to play with them!

The Tonkinese breed was developed when the Burmese and Siamese breeds were crossed. They come in a wide range of colors, including with pointed coats. Kittens are born white, and their coat color will gradually become evident after a few days. The Tonkinese is an incredibly playful breed, and they usually love to climb, chase toys, and run around the house. They were first called the Golden Siamese in the 1950s, then their name was changed to the Tonkinese in the 1960s. If you’re looking for a breed that you can train, they’re a great choice!

An exceptionally rare designer breed, the Ashera blends the wild African Serval, the Asian Leopard Cat, and domestic breeds into an incredibly tall and heavy cat that can weigh up to 30 pounds. Developed by the brand Lifestyle Pets, investing in an Ashera cat will cost you no less than $22,000! They’re a vocal and friendly breed and can be taught to walk on a leash. Their coats have a distinctive striped and spotted pattern. As with some other designer cat breeds, there’s plenty of controversy surrounding the Ashera, so you may want to keep this breed on your wish list.

Developed in Australia in the 1970s, the Australian Mist blends Abyssinian, Burmese, and Domestic Shorthair bloodlines. Their coats are lightly ticked, combined with pale spots and swirls, giving it a misty appearance. They can be found in seven colors: peach, gold, brown, chocolate, lilac, caramel, and blue. Australian Mist cats are friendly, playful, and inquisitive. They’re pretty rare in the U.S.A. and Europe but are becoming better known as their popularity increases.