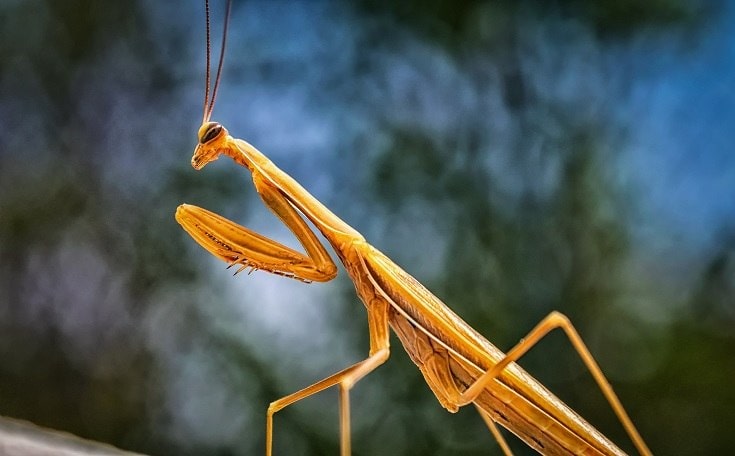 When you first think of insects, a great pet isn’t the term that exactly comes to mind. However, some of these creepy-crawlies make for some pretty interesting pets and companions. While they’re not going to snuggle with you and keep you warm at night, they can provide a sense of pride and ownership as a pet owner.

Let’s take a look at 10 of the most interesting insects that make great pets!

Stick bugs are some of nature’s most stealthy creations. And that’s because they’re naturally camouflaged to look like sticks or bundles or leaves! They’re a good chance that you’ve passed by many a stick bug and didn’t even know it.

Stick bugs vary in size with some being only a few inches long, while others can grow up to a foot in length. Despite their woody appearance, stick bugs are often very fragile and can only handle touch as long as you are very gentle.

Okay, so technically, millipedes aren’t insects—they’re arthropods. Millipedes belong to the same family as scorpions, crabs, and lobsters! But that doesn’t make them any less cool. They’re super interesting pets, and it’s great to watch how all of their legs work in action to create burrowing tunnels throughout leaf litter.

We don’t recommend handling them too much though. Millipedes have a particular defense mechanism that excretes a chemical that can irritate human skin.

Cockroaches are known mostly as pests and are subject to extermination in most homes. And while some breeds of cockroaches—such as the German cockroach—can be disease-carrying annoyances, other breeds feel right at home with a bug enthusiast.

The most common species of pet cockroach is the Mediterranean Hissing Cockroach. They’re desired as pets because of the unique hissing sound they make when stressed or agitated.

When you think of the creepiest insects around, the praying mantis is probably among the first few that come to mind. They’ve got triangular-shaped heads with large piercing eyes and their trademark pose and pinchers. Oh yeah, and they’re cannibalistic. They’re some of nature’s best hunters and help to keep many pest populations under control.

They’re also very interesting to have as a pet. Observing these hunters in action is just absolutely amazing. They only live for about 6 months though, so don’t expect to keep them as a long-term companion.

Regarded by many cultures as lucky, crickets make for great pets. Their chirping can be almost therapeutic, and they’re very inexpensive to care for. However, your crickets aren’t going to be very long-lived. Their lifespan is only a few short weeks.

Raising crickets can be very good for those who have reptiles or larger predatory insects. They’re a great food source for several other species.

If you don’t have too much time to dedicate to raising a pet, mealworms might be the way to go. They’re the most low-maintenance pet on the planet. All you need to keep them well-nourished and happy is just a bed of oats and some occasional veg. And just swap out their oat bedding once a week to keep their habitat clean.

Mealworms are also great pets for kids—provided they’re gentle enough to handle them. Their crunchy, yet wiggly texture provides a wonderful sensory experience for children when holding them.

Owning an ant farm is one of the coolest things you can have when it comes to insect pets. Ants are among the most industrious insects and watching them construct their colonies is truly something else.

Once you start raising ants, they’re almost entirely self-sufficient provided you give them access to food and water. Just be sure you check the dietary restrictions of your particular ant species. Some ants are content with water mixed with honey, while other species require seeds, vegetation, or other insects.

Don’t let the cute name fool you. These are fierce-looking creatures with equally menacing lifestyles. Doodlebugs are the juvenile stage of the antlion. And they spend their time building traps for unsuspecting ants to catch for dinner.

Antlions undergo a metamorphosis similar to butterflies and emerge from their cocoons with long, narrow bodies and wings. These insects are excellent for observing animal predation and transformation all at once.

These little buggers are more commonly referred to as rollie pollies or pill bugs. They come in various sizes, and you can easily catch some of the smaller variants outside in your garden. They’re essentially harmless and don’t bite at all.

They’re great for children too. Because if the child starts to play too rough with them, they’ll roll themselves up into a little defensive ball. Their mini armored exoskeleton will help to protect them from the pressure of grubby, prodding fingers.

If you’re looking for a real attention-grabber, nothing does it quite like a rhinoceros beetle. These stout creatures are easily recognized by their large protruding horn on the front of their heads which also gives them their name.

However, if you’re going to breed them, things can get a bit difficult. They’re not too receptive to captive mating. But it can be done. The female must be held immobilized in place while the male approaches and lets nature take its course.

Although commonly referred to as gross or scary, insects can be just as interesting—if not more so—than other species. They’re ideal house pets as most are relatively low-maintenance and require little intervention from their owners. Plus, insects will show you a side of the animal world that’s seldom seen up close.

Looking for the perfect pet for kids? Check out these posts: